AT THE EDGE OF THE WORLD: Lisandro Alonso on FANTASMA 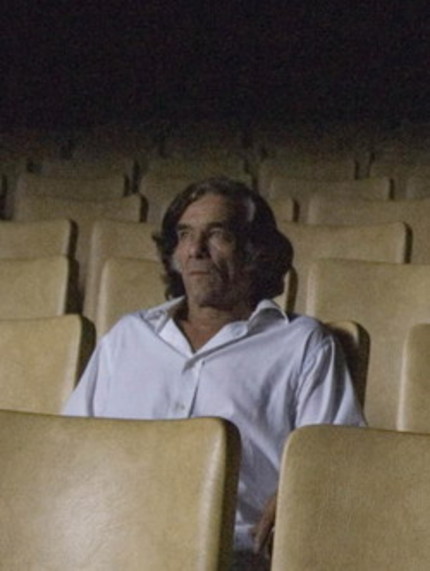 As Jay Kuehner assesses for Parallax View: "Fantasma, per its title, coyly and spectrally endeavors to bring together the principal 'non-actors' of his previous films to Buenos Aires, to the fabled Teatro San Martín, for--what else?--a retrospective of Alonso's films. The setup is an ingenious way to bring nature to the city, actors to their affect, and audiences to their subjective screens." The program capsule for the Harvard Film Archives notes the offbeat delight in watching Argentino Vargas wandering the labyrinthine corridors of the Teatro San Martín "in search of the film's premiere."

Fantasma was Alonso's way of saying thank you to the lead actors in his first two films: Misael Saavedra (La Libertad) and Argentino Vargas (Los Muertos). He wanted to thank them because they had both helped him change a certain portion of his life when he became his kind of filmmaker. Fantasma is an inbetween film in many respects. First of all, he was not able to secure the budget he needed to make the film he initially planned to make and, instead, elected to shoot a featurette.

All of Fantasma's scenes were shot in the Teatro San Martín, the cinematheque where Alonso grew up watching films. Teatro San Martín is part of a five-theater cooperative (the Complejo Teatral de Buenos Aires) where the films of modern filmmakers such as Bresson, Fassbinder, and Kurosawa have been screened. For many years it was the only place he could see serious film, especially in his later student years when he spent much time there, often among audiences that numbered no more than three or four people, which was admittedly wonderful in a certain way. Sitting alone in a cinema, or sharing a film with only a few people, Alonso could enjoy a film undistracted by voices around him. He wonders if that solitude isn't what made him feel so strongly about film? Without question, Teatro San Martín's physicality left a lasting impression. Further, where tickets were $10 at other venues, at the Teatro San Martín it was only a few. Though he often focuses on people outside of Buenos Aires who don't even know what cinema is and often have never seen a movie themselves, even within Buenos Aires most people don't have the dispensible income to go to movies that are questionably marginal, and rarely discussed in the public sector. If they can't talk about a film with their friends, they tend not to go. Which is to say that choice as much as access determines what filmgoers in Buenos Aires support.

Having visited Misrael in the Pampas and Vargas in Corrientes, Alonso felt it was time to invite them to Buenos Aires for the theatrical opening of Los Muertos. Admittedly, the film is limited and "a strange film, maybe." If you don't know who Misrael and Vargas are, Fantasma makes no sense. As an "inbetween film" requiring the first two, Fantasma continues to pursue Alonso's questions and critiques of Argentine filmic identity. "It seems there's two different kinds of Argentina," he mused. "One is Buenos Aires and one is outside Buenos Aires." When people talk about Argentina, they're usually referencing Buenos Aires, its main city. Similarly, when Argentines talk about culture and what there is to enjoy in Argentina, it's presumed this must be within the city. Alonso invited Misael and Vargas to Buenos Aires because he wanted to shoot how they fit into the cinematheque, which is a building that--though it means little to anyone else--means a lot to the people of Buenos Aires, and especially to him. As it was under reconstruction, the building was empty and Alonso took advantage of this opportunity to shoot his film. If they had said no to his request to film there, Fantasma would never have been made; the building was that important to the concept. As James Quandt specifies: "Fantasma is no less a film of landscape than the previous two. Like the pampas of La Libertad and the jungle of Los Muertos, the labyrinthine San Martín becomes Fantasma's second character: As much as the camera may linger on a now gaunter Vargas, in from the wild and uneasier than ever, Fantasma makes setting its preoccupation."

Fantasma was also Alonso's attempt at comedy, though unfortunately no one laughed. Or more, it was that he "wanted to enjoy some jokes in the film" and to also comment on the kinds of film he wants to see; films which are vanishing and disappearing from distribution. Shortly before he made Fantasma, he had seen Tsai Ming-liang's Goodbye, Dragon Inn and--though Fantasma comes nowhere near Goodbye, Dragon Inn--it was evidently influenced by that film. Several critics have noted the resemblance. Quandt offers a separate comparison: "But, oddly, it is Tati who most comes to mind in surveying the San Martín's modernist horror of malfunctioning elevators, confounding staircases, and harshly lit hallways, rooms too ample or cramped, humanity subjugated to decor, architecture, mazes, and machinery. Like Tati, Alonso sees in this surrounding a kind of elegant inutility, a vast contraption in which people stumble, turn back, retrace their steps, push buttons that don't work, tentatively position themselves in spaces not designed for their being, much less comfort."

For Alonso, the pleasure of shooting Fantasma involved such things as realizing that Vargas had never in his life walked on a staircase, which Alonso could detect when Vargas walked down them. That told him a lot about Vargas in different spaces. You felt no awkward discomfort watching Vargas walk in his natural habitat the jungle. In fact, when they walked together in the jungle, Vargas laughed at how Alonso walked. "This was how I took my revenge," Alonso grinned, "though it wasn't easy." He had to work at convincing the reluctant Vargas to come to Buenos Aires. It wasn't about the money. But Alonso eventually convinced him to come enjoy the process and Vargas subsequently returned to Buenos Aires when Fantasma was released at the cinematheque, which was something like playing with mirrors because the film was made and shown in the same place. It was a multi-layered experience, especially after the film when the audience exited the auditorium into the spaces depicted in the film.

In some ways the film closed a cycle with Misael and Vargas. Perhaps in the future they will do another film together? Or maybe he can find new people to replace them? He cast his ex-girlfriend Rosa Martinez as the employee of the cinema. One of the other actors worked in the cinematheque itself. He tries to work with people who enjoy the particular experience of acting in one film.

Before making Fantasma, Alonso was impressed with Gus van Sant's Last Days because it made him question what cinema is today. He realized he doesn't know what cinema is nowadays. Last Days reminded him that cinema is "simply" image and sound. So he tried to create a strange feeling about the cinematheque but with sounds from the cinematheque, like telephones and elevators. With his camera crew he captured environmental sounds such as street traffic. Fantasma served as a bridge (or as Quandt describes it, "a pendant") between Los Muertos and Liverpool. Alonso already knew he would be shooting several interiors with artificial lighting in Liverpool. Fantasma gave him the chance to practice, since he had mainly done exterior shots until then. He made many mistakes and perhaps even repeated some of those mistakes in Liverpool.