AFM 09: Luke Perry Is The Prophet Of The Coming Apocalypse In Uwe Boll's THE LAST STORM 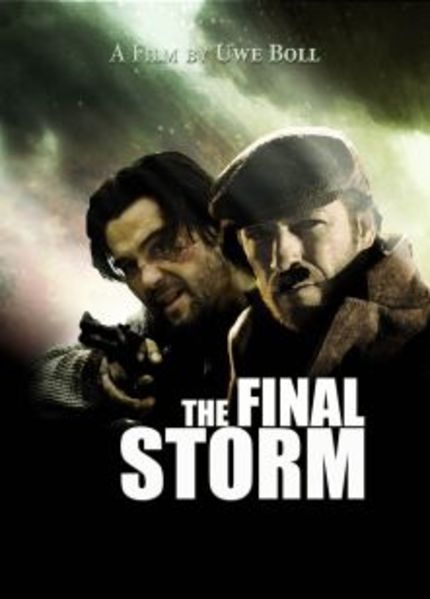 Look out world, Uwe Boll is about to get Biblical on your ass and he's bringing Luke Perry along with him.  But before we get to the actual content of the film, what the hell is on Luke Perry's face in that poster?  That's just ... damn ... it's like some alien parasite latched on to his lip.

It's the Biblical end times, people, the Rapture has happened, things are falling apart badly and there's just a small, rag tag band of survivors left on the planet.  And Luke is showing the way. Sort of.

Biblical rain, dying animals, and a blood red moon; clearly, all is not well on the quiet farm in the countryside where Tom makes a living with his wife Gillian and their young son Graham. Before the cable and power goes out, glimpses of weather related catastrophes on a global scale are
hinted upon. Amidst these eerie signs, a soft spoken man named Silas stumbles onto their property, sick and cold. Even more disconcerting is how quiet Tom notices everything is... neighbors, cars, birds, crickets, all are nowhere to be seen nor heard. According to Silas it's not so much as the beginning of the end, but in fact the end itself, and they've been left behind.

As Tom goes about things in denial, believing that the flooding rains have simply evacuated the town, he shuts out those closest to him, allowing Silas, perhaps the only other man left alive, to grow closer to the emotionally starved Gillian and Graham. But the unsettling evidence cannot be ignored and Tom struggles with the horrifying truth: maybe it is the apocalypse. The rapture. The end of days. And they're all that is left of humanity. As Silas slowly reveals his true colors with his murderous past, and lust for Gillian, the tension between the men builds until an explosive showdown occurs, with Tom defending his family, and fighting for their survival, and perhaps the survival of all mankind.

Why stop the fun with a poster when there's a trailer to be had?  Look!  There it is!  Right below here!
Tweet Post Submit