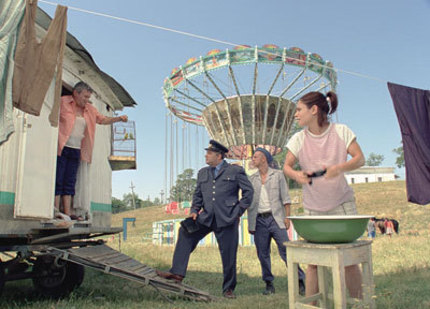 [Our thanks to Andrew David Long for the following word from the Vancouver International Film Festival.]

Starting with its debut in Cannes this spring, TALES FROM THE GOLDEN AGE has built a reputation as a sharply written collection of stories sourced from urban legends and mostly-true tales of life under Romania's Ceausescu regime.  Writer/Director Christian Mungiu (4 MONTHS 3 WEEKS 2 DAYS) has crafted five brief tales firmly rooted in the notion that there's no longer any need to castigate a past regime that created and presided over one of the bleakest periods in Romanian history, a period which the propaganda machine consistently referred to as a "Golden Age."  No, in hindsight, clearly they are begging to be mocked.  Wry, absurd, compassionate, and at times hilarious, Tales From the Golden Age is much the better for the pervasive and ominous sense that an arbitrary and often cruel regime is waiting for each citizen to make an error, to disappoint, to fail to live up to the propaganda.  These are not, however, tales of the government: they are tales of the people who struggled merely to live under the watchful eye.  Sit in a theatre whose audience includes even a handful of Romanians who lived during Ceausescu's rule and you will hear a recognition in their laughter that reveals how close to the bone Mungiu and his directorial co-conspirators strike.

Front-loaded with more obvious comedy, Tales leads off with "The Legend of the Official Visit" in which a rural village must turn itself into a model display of party sentiment before high officials drive through.  From this beginning, Tales uses the constant fear of authority to drive its comedy.  This fear never lets up, and when Tales turns to its bleakest points, the pain and the consequences are rooted in people learning to behave as the regime does - in poorly reasoned self-interest.  Few would dispute that Romania is now entering a cinematic golden age, and despite a mostly unheralded directorial team, none of the segments here disappoints.  From Official Visit, we turn to the "Party Photographer", the segment in which the heavy hand of the Party is most obvious and absurd (and anyone with an interest in political spin will love the brutally simple logic of manipulating photographs for newspapers.)  Sloping as it does from funny to tragic, Tales' balancing point of fear and silliness falls in precisely in the middle with "The Greedy Policeman", in which a selfish oaf manages to obtain a pig, but must determine how to slaughter it quietly in his tiny apartment without anyone finding out.  Not without lighter points, the last two pieces, "Air Sellers" and "Chicken Driver" press home the difference between true resourcefulness and simple greed, and are unflinching yet non-judgmental in their portrayals of good people making questionable choices.

Despite having five directors, and having with cinematography and editing duties shared among several more people, Tales has a unity that eludes many similar projects, in part thanks to being the issue of a single pen, but also because of a commonality of purpose.  Both the shooting and cutting are remarkably consistent and unobtrusive, showing the restraint to serve the stories gracefully, because Tales From the Golden Age is much more about the delights and solace in shared stories than about politics and oppression.  So when the black Dacia with tinted windows pulls up in front of your home or office, hop in.

Tales from the Golden Age