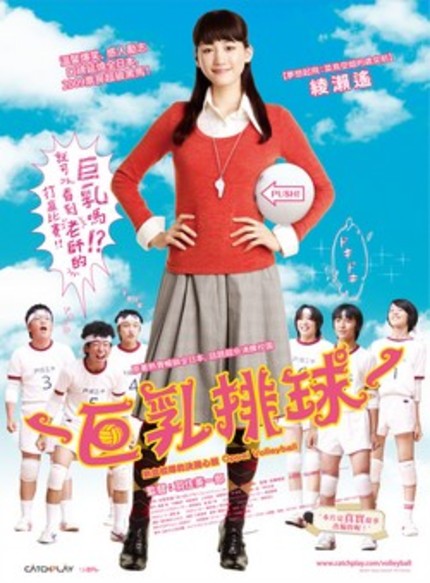 And to think that the movies make it seem like a stepping stone on the way to adulthood, particularly movies like this. You know, the idea that, once men get past their adolescent fervor, they no longer think about a certain something with rather significant frequency. Something like.... tatas, for instance. Of course, everyone but the very youngest and most impressionable will approach something like おっぱいバレー (Oppai Volleyball) - title which couples two things which bounce quite well, if you were wondering - and expect it to actually deliver on its delirious and mucho ad-hoc premise, but that's sort of besides the point. I mean, can you really hate a film which starts with a group of horny teenagers riding a cart downhill and clasping the air with their hands, to recreate what they believe a pair of well-endowed boobs would feel like, while magically corny 70s J-pop like Pink Lady's 渚のシンドバッド (Nagisa no Sindbad) triumphs in the background with its "Sexy! Anata wa sexy!" Can you?

It's the lovely town of Kitakyushu, part of the Kanmon Straits and lucky enough, in 1945, to be blessed by clouds when Major Sweeney and friends were about to drop the Fat Man, "honor" which instead went to Nagasaki. If the Datsun models prancing about and the sounds of The Finger Five weren't enough to suggest it, yes, we're in the late Seventies, and young middle school teacher Mikako (Ayase) is about to make her first speech in front of her new class of students. Just so we get an idea of what the kiddos are really concerned about, when Mikako presents them her favorite anthology entitled 道程 (doutei, journey), the boys think the new belle in town wants them to feel "the true meaning of 童貞 (doutei, virginity)." Predictably, bloody noses ensue, giving poor Mikako a vague idea of what she can expect from now on. But fear not, for limitless enthusiasm is on her side, and she volunteers to coach the male volleyball team, a quintet of otaku-in-waiting who have never touched a volleyball, and seem too occupied with their horny escapades to worry about coubertinian notions of sportsmanship. What can a teacher do, to make these boys understand the meaning of true effort, of teamwork and the joy of sharing a triumph, or giving each other solace after a defeat? For starters, promise them one thing, upon the fulfillment of their very first win: that she will show them her oppai. And be prepared to be graced with the word with Guinness Book-friendly frequency, because that's more or less all that you will get.

I'm not really faulting director Hasumi, who was assistant director on 踊る大捜査線 (Bayside Shakedown) before going back and forth between forgettable fare on the big screen like the 海猿 (Umizaru) franchise, and safe manga adaptations on TV like アンティーク (Antique). In a way, Oppai Volleyball feels like a much tamer, volleyball-oriented answer to his deliriously silly baseball comedy 逆境ナイン (The All-Out Nine - Field of Nightmares), again adapted from a popular manga. In this case we're dealing with a popular novel by Munenori Mizuno, one allegedly based on a true story, but veteran TV writer Okada Yoshikazu - who worked with Hasumi on Antique - goes for a rather bland adaptation, only stressing the minimum requirements to build a successful project film and never really taking advantage of the rather ingenious premise. So we get some silliness at the beginning, a dramatic quandary in the second act, and a third act full of sanctimonious life lessons, as if we weren't dealing with a Japanese sports-comedy. Okada does this pretty often on TV, recent exploits like 無理な恋愛 (Muri Na Renai) or 銭ゲバ (Money Crazy) being the perfect example: the foundations of many of his stories seem to have potential, but then he develops them in a rather listless, ordinary way, making any unconventional starting point rather moot. The same happens here.

Expecting anything too racy out of a project like this would be rather naive, but the film would have won many a point by going into one of two directions with conviction: one is the well tested Yaguchi Shinobu-style comedy a la ウォーターボーイズ (Waterboys), or something along the lines of ピンポン (Ping Pong). You keep things simple and breezy, throw in lots of silly comedy and let loose anyone with enough talent to produce some ad-lib, using plenty of sports scenes as salad dressing. The other is doing something akin to Korean dorky coming-of-age comedies like 몽정기 (Wet Dreams), filled with sexual innuendo but never really requiring that "18 and Over" label. But what really spells failure for this film is not that we don't find too much in the way of oppai in this Oppai Volleyball. Even the volleyball is rather scarce, the selected few scenes we are blessed with oozing a certain laziness. It's almost as if all they wanted was a killer premise that could put some asses in the seats, and that was the end of their worries. Because, at least on paper, this looked like a surefire bet.

After her debut as a gravure idol, Ayase Haruka has shown she has much more to show than just her rather generous curves, particularly in the last three years - she is doing rather well in TBS' fascinating period medical drama -仁- (JIN), for instance - but it almost feels like all they needed her for was that premise: there is probably no better choice in Japan when it comes to those particular "requirements," not to mention someone who can add the necessary star power and some acting talent as icing on the cake. No matter how mendacious the film's MacGuffin was, you could easily have her become the catalyst of those six boys' growth, and the realization that there's more to life than huge boobs. Throw in some raunchy gags without delving into vulgarity, fill the film with a healthy dose of well orchestrated volleyball, and you've got a winner. But after that exhilarating first scene and the crescendo to the big "quest" at the core of the film, Oppai Volleyball never recovers, gradually losing steam and the quirky charm of that initial quarter hour.

In pure Okada fashion, we get a parallel story of growth involving Mikako herself, and the guilt which probably led her to Kitakyushu in the first place (dealing with a past teaching experience of hers), but whereas it is somehow integrated into the main story and connected to her "promise," this all feels as if portions of another film started invading our little sports comedy. Had Mikako been a more compelling character and not just a catalyst for the boys' growth, then maybe it could have worked, but this side-story all smells of Hollywood-style complacency, obsession to please everyone et al (sure enough, look who's producing). Really, it's not that hard: you have a perfect premise, and even though you can't really live up to it, you still can have a lot of fun with the idea. Sports comedies like this really live and die by their buildup, considering that cliches are what awaits us at the end anyway. But as the minutes pile up, you're not really feeling anticipation for what will surely be a predictable, but exciting outcome. You're fatigued, and sort of tagging along for the ride, hoping the energy of those initial 15 minutes will somehow resurrect in the final reel. It's really no use casting big names like Nakamura Toru, when all you can give him is a glorified cameo and the trailer-friendly line of the film ("Nice oppai!"), nor does the labor of love in recreating 1979 Kitakyushu make any impact, since we're spending most of the time indoor dealing with pedestrian bildungsroman tropes.

Forget De Coubertin, they really should have listened to Mikako: it's the journey that counts, even when at the end it won't be really "oppai" what will be bouncing.....