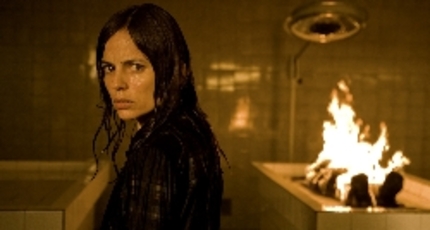 How's this for a bit of pressure to lay on a new director: Gabe Ibanez's debut feature Hierro boasts the writer of King of the Hill (El Rey De La Montana), the producers of Pan's Labyrinth and The Orphanage, and Guillermo Del Toro himself in the credits. These, my friends, are some big names and big expectations to live up to. Thankfully, Ibanez is up to the challenge, Hierro immediately and firmly establishing him as one of the most striking new visual talents to arrive on the scene is quite some time. While the film is not without its problems it is absolutely gorgeous to look at from start to finish and blessed with many more strengths than weaknesses.

Marine biologist Maria is the loving single mother of Diego, the five year old boy who she dotes upon and who responds in kind to her. They adore one another and their home is a happy one, happy at least until the pair go on vacation to the island of Hierro. Exhausted, Maria falls asleep while on the ferry to the island and while she dozes, Diego disappears. Searches turn up nothing, public appeals for help likewise, and soon the police have no choice but to confront Maria with the reality that all of their options have been exhausted without turning up a single lead.

Six months later, Maria is a broken women. The incident has left her with serious phobias of both sleep and water, that latter being a major obstacle to her working life. The absence of her son dominates Maria every bit as much as his presence had and she is teetering on the edge of both obsession and nervous exhaustion, a situation pushed even farther when the police call from Hierro to tell her that they have found a body that may be Diego. She must come and identify it. The police are certain that the body is Diego's, so certain that they have not made provisions for DNA testing, assuming that Maria will confirm their suspicions, and so when she refuses to do so they are forced to keep her on the island for three more days until a judge can come to approve the sampling of DNA from the corpse. And a lot can happen in three days.

The story of a mother's loss and obsessive need to find her child, Hierro deftly takes the audience inside Maria's mind as her obsessions increasingly cloud her judgement. She begins to see conspiracies all around her while vividly realized nightmares plague her with an ever-flowing stream of omens and warnings. The film never quite decides whether it wants to be a character study of Maria's slipping grasp on reality first, or whether the whodunit into the mystery of Diego's disappearance should take priority, which leads to some logic jumps and what seems to be overly-simple moves from point to point on occasion but it is very clear here that Ibanez is a major new talent, a genius behind the camera with a keen eye ad uncommon ability to create disturbingly hyper-real images, his dream sequences in particular being incredibly effective.

Is Hierro the next Pan's Labyrinth or The Orphanage? No, it's not, the inconsistencies of the film keeping it from ever reaching that level. But there is no doubt at all that Ibanez' next film very well could be. Expect great things.