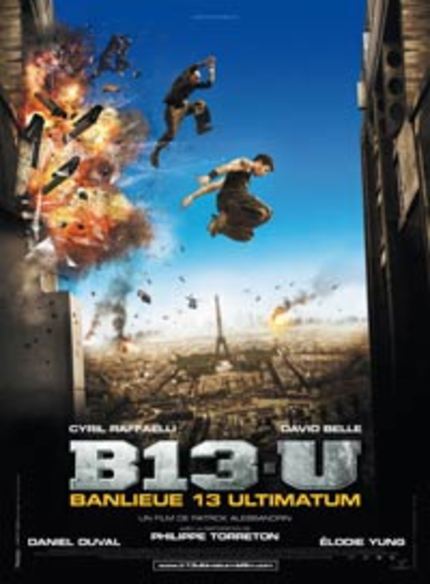 As the saying goes if it ain't broke don't fix it. Keeping that in mind Luc Besson, knowing he had a good thing with the first District 13 film, simply followed the instructions on his shampoo bottles- lather, rinse, repeat- and gave us another chapter in the history of Paris' most notorious gated communities. And not the good kind. Writing another story, slightly changing the focus a little, and handing over the reins to a new director Patrick Alessandrin, Besson and his team turn the action knob way passed 11 to 13!
Three years after the events of the first District 13 and the promises for changes have never happened. The walls of D13 have not come down. Though it be a very diverse community culturally everyone has still fractioned off into their own little sub groups and all the police can do is stand on the outside and watch. However, there is another group watching the districts with intense interest as they have oodles of money that they wish to spend but nowhere to spend it. Room has to be made for their planned land development if they are to become even richer. D13 looks like a nice place to level to the ground and build a upper class community on top of. But how to do it? How do you get the authority to clear out what is essentially a slum? Idea. You kill a couple cops, dump them and their car in the middle of D13 and provoke one of these sub groups to open fire on the car thus placing the blame wholly on them. Then you have all the authority you need to clear them up and set up your hotels and condos. Unfortunately for our evil civil servants [aren't they all though?] some kids in a car capture this assassination on tape and the incriminating evidence falls into Leito's [David Belle] hands.

You also have to be mindful of Damien [Cyril Raffaelli] Paris' Top Cop who plays by the books and will surely be a rather large fly in the ointment. Simple enough, raid his house, plant some heroin and stick him jail until things blow over. Not so simple as Damien simply won't take this crap lying down so he gets a hold of Leito, procured from the hands of a jailhouse cop in a choke hold, and asks him to come get him out of jail. Leto arrives. Chaos reigns. They escape in spectacular fashion, as everyone should, to D13 and begin to devise a plan to save D13.

It is also my sad duty to report that Dany Verissimo's Lola, Leito's rather stunning sister- wink wink, only makes an appearance during the prologue. Sigh. Moving on.

So how does Ultimatum do on its own and when compared to its predecessor? Not bad. It holds its own and continues in the same spirit of the first. Fast hard hitting action laced with some crazy stunts is the key here. Really, not a whole lot happens throughout the film plot wise. Someone's made a boo boo. Let's go to the guys who made the boo boo and fix it. Bingo. Let us get started then. Times a wasting and we've only got 100 minutes to do something about it. Both Leito and Damien are given their opening 'monologues', if you will, where they remind us again why we liked them in the first place. But now the focus of the second film moves to Damien whereas the first film was about Leito saving his sister and D13 all in one day. The character of Leito was essential to the mix the last time because D13 really opened up the world to free running/parkour. But now Besson has moved his focus back onto government and law enforcement corruption so all eyes are on Damien. And being a rather accomplished martial artist Cyril proves more than up to the task dishing out fists and feet. There are fights o' plenty in Ultimatum and neither Cyril nor David disappoint. One of the concerns about the first D13 was that it was end heavy with the action. Not the case here. There is more than enough to go around.

Who does disappoint me however is Alessandrin simply because he falls into that all too common trap of shooting and editing action. More angles and more cuts mean better action. Um, no. Almost off the top it was clear that Alessandrin was going to test my patience with his shot choices. This is most troublesome during David's moments when he's running around jumping off buildings and walls being chased by cops in light body armor. How can I demonstrate this grammatically? There is far more 'Jump. Fly. Land.' than there is 'Jumpflyland'. Alessandrin chooses to take one shot to show David jumping. He changes cameras and angles to show him in mid flight. He completes the cycle with another camera shooting the landing. I just feel that this completely takes away from the amazing skill, athleticism and testicular fortitude that David Belle has when he and his parkour teams are free running through those scenes. I wouldn't doubt the camera skills of Alessandrin, his camera crew or his cinematographer but if high school kids can make more interesting home videos that capture the spirit and skill of free running better than these guys then the question of intentions arises.

Overall, Ultimatum is a fun movie that delivers on the action regardless of how picky I am on the technical side of that action. A simple plot and story merely serves as a means to an end and the subtext of France's ongoing race relations problems is never stated but is understood by those who pay a little attention to these things. The key reason for the success of this film is Cyril and David. They are tremendous technicians and athletes and carry their roles with an affable charisma.