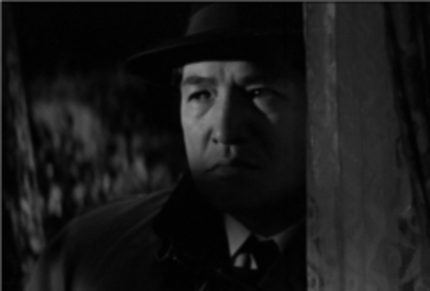 Seijun Suzuki started as a contract director for Nikkatsu in 1956. By the time 1960 rolled around, which was the year Take Aim at the Police Van was released, Suzuki had over a dozen films to his credit. Suzuki's entry in Eclipse's Nikkatsu Noir box set is ultimately a minor work in his overall canon, but it is nonetheless a solid film.

In Take Aim at the Police Van, a police van (really?) transporting prisoners is attacked early in the first act. Both prisoners and guards die as a result, and a prison officer named Daijiro Tamon (Michitaro Mizushima) takes the heat for letting the incident occur. His punishment is a six month suspension, which he simply writes off as an extended vacation. Tamon is bothered by things he noticed at the time of the incident, including a name scrawled in a dirty bus window by a prisoner named Goro (Shoichi Ozawa) and the appearance of a mysterious woman near the attack. Working from these minimal clues, Tamon uses his idle time to investigate the incident, and becomes entangled in the criminal underworld.

Take Aim at the Police Van is more of a mystery than a hard-boiled action film. The pacing is slow, which makes sense given the fact that its a mystery (there is even an exchange between Tamon and another character about American mysteries versus Japanese mysteries). The real source of interest about this film is not its story, but how the film was made. As one might expect from a film by Seijun Suzuki, Take Aim at the Police Van is full of cool visual flourishes. Even though Suzuki has said that his first signature film was Youth of the Beast in 1963, there are all sorts of unique things going on in Take Aim at the Police Van, including: attention to asymmetry/symmetry, and background/foreground in shot composition; long, winding tracking shots with shifting POVs; and multiple flash-back montages. In spite of the slower pacing, the film contains plenty of zippy action sequences, including a great final showdown at a train station, and fast cutting is used to ramp up some of more tense scenes Visual cues are occasionally used to signal action. For example, a recurring visual motif of a gunman viewing road signs through the scope of a rifle is used. These scenes are shot from the gunman's POV, moving from right-to-left with a momentary pause on each sign. This motif is established in the opening scene, and is used at least two more times throughout the film.

Shigeyoshi Mine, who handled cinematography on A Colt is My Passport, and Suzuki's Gate of Flesh, and Tokyo Drifter, also worked Take Aim at the Police Van. As expected, his black-and-white cinematography is rich, and his manipulation of light and shadow in creating a dark mood is clever. On the negative side, there is a noticeable gray cast in some of the outdoor sequences, which seems to indicate underexposure of the image. Additionally, the source material for Take Aim at the Police Van shows more wear than the other Nikkatsu Noir titles discussed so far.

The next Nikkatsu Noir title to be discussed is Rusty Knife (1958). This is the first film by Toshio Masuda, who would later go on to make the infamous The Last Days of Planet Earth. This one should be very interesting.

Take Aim at the Police Van