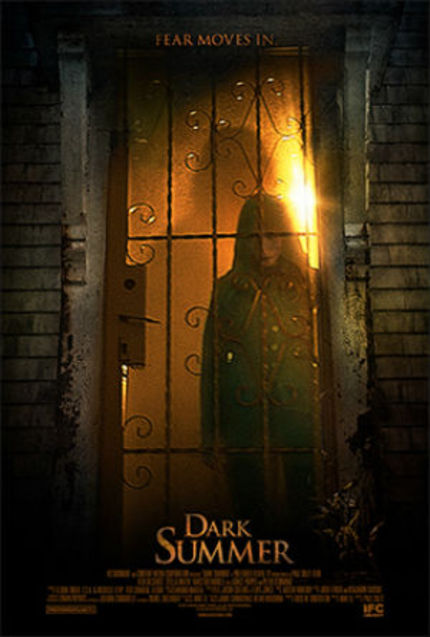 Sentenced to house arrest for cyber-stalking a classmate, what is teenage Daniel to do?

As Dark Summer gets underway, parole officer Stokes (Peter Stormare) explains to Daniel (Keir Gilchrist) what is and isn't allowed. Daniel immediately violates the terms of his sentence, enlisting his friends Abby (Stella Maeve) and Kevin (Maestro Harrell) to bring him a laptop computer. (That's two violations in one, since he's not permitted to have any unaccompanied minors in the house.) He's some kind of tech whiz, and he's already laid the groundwork so he can connect to the internet without being detected. (That's violation three.) Now he can resume his cyber-stalking of former classmate Mona Wilson, played by Grace Phipps. (That would be violation four.)

Except that Daniel hesitates, and thinks better of trying to crack Mona's Skype account password once again. Moments later, however, Mona takes the initiative to make contact with him, raising Daniel's hopes, before terminating any possibility of a relationship in the future.

Very soon thereafter, Daniel begins experiencing odd, disturbing little visions, suggesting that a ghostly presence is haunting him. Kevin and Abby try to help, even though they're inclined to believe he's imagining any kind of supernatural presence. The evidence piles up, though, and becomes impossible to dismiss, prompting increasingly more drastic attempts by the trio to deal with a very dangerous force.

Paul Solet previously wrote and directed the pregnancy-themed horror flick Grace (2009), which time and circumstances have prevented me from watching. (Below you can find links to ScreenAnarchy reviews by Ard Vijn and Kurt Halfyard.) This time Solet directs from an original script by Will Le, which sets things up efficiently but is light on character details for much of its 81-minute running time.

For example, high-school aged Daniel appears to live with his mother, who is mysteriously absent, and is completely lacking in adult supervision; we must assume that he's turned 18 and that his only friends or acquaintances are Kevin and Abby. While we learn nothing about Kevin, it quickly becomes apparent that Abby is nursing a longtime crush on Daniel, though he's oblivious to her attraction, due to his own longtime crush on Mona. 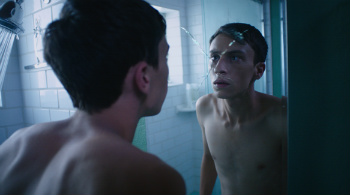 Solet creates a spare, creepy atmosphere for Daniel to inhabit. It's a world that may be limited to his modest suburban house and yard, yet, strangely, it never feels claustrophobic. As Daniel points out, the ghost (or whatever it is) is obsessed with him, not the house or garden, and so the film too tracks his activity closely as he deals with his demons, personal and otherwise.

Alas, Dark Summer struggles to stay on course, veering off to explain itself and then straining to reestablish the tension that had been slowly building. I liked the twists and turns, though, and must reluctantly admit that the 'jump' moments succeeded in making me shudder, more from the surprise than the scare. but still.

Solet's quietly effective direction and spot-on performances by the lead trio -- plus Peter Stormare's turn as the 'not as suspicious as he really should be' parole officer -- make for satisfying low-key horror, a chilling experience with ghostly overtones that leaves a pleasantly creepy aftertaste.

The film opens in limited theatrical release in the U.S. on Friday, January 9. It will be available to watch the same day via various Video On Demand providers. Visit IFC Midnight for more information.

Do you feel this content is inappropriate or infringes upon your rights? Click here to report it, or see our DMCA policy.
Keir GilchristMaestro HarrellPaul SoletPeter StormareStella Maeve