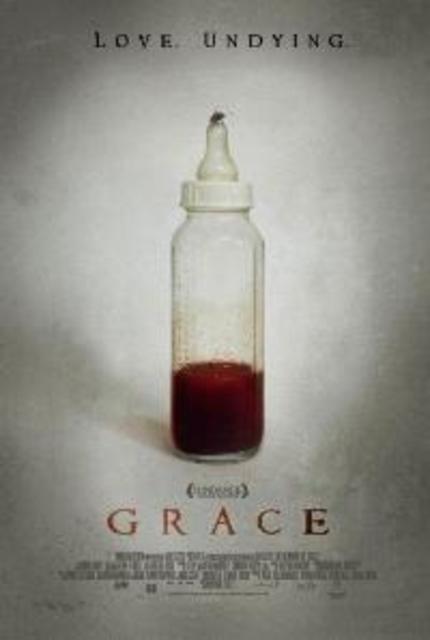 [Our thanks to Guillem Rosset for his ongoing coverage from Sitges.]

Grace arrives to Sitges surrounded with expectation. It's not so much about the good impressions it left in its Sundance screening but more about the stories of people leaving the theater sick because they can't stand it anymore. It's somewhat similar to what happened last year with the film Martyrs, directed by Pascal Laugier, which in my opinion was fairly exaggerated.

The story of Grace is the story of Madeline, a woman who lives a normal (but rather dull) life with her husband. But there's one thing she desires the most: a child. When she gets finally pregnant, she decides to seek the assistance of a midwife instead of an ordinary doctor and a normal hospital, despite the strong opposition of her mother in law (a controlling woman who disapproves Madeline's vegan way of life). The tragedy strikes her when a terrible car accident causes the loss of both her husband and her 8-months unborn daughter. Ignoring everyone's advice, she decides to carry on with her pregnancy and give birth to her daughter Grace. Things get an unexpected twist when the newborn Grace turns out to be a beautiful and healthy child. Or isn't she? Madeline starts noticing strange things, like the child's funny smell and the fact that flies seem to get really attracted to her. Furthermore, Grace's having problems with her mother's milk and brings up everything she eats...until one day, a couple of blood drops get mixed by accident with Madeline's milk. This new diet seems to really revitalize Grace, so Madeline (more and more stressed and weakened by this situation) will have to think of new ways for getting the necessary blood for her daughter, while struggling with her mother in law for the child's custody.

So, is the expectation we were talking about well deserved? To cut it short: no. Don't get me wrong, it's not a bad movie, but I just can't see where all this buzz is coming from. Sure, I don't think it's the best suited movie for a pregnant woman to see, but I don't think it deserves to be in a "most shocking films" list. Not even close.

The movie comes from one of the director's own short film, extended into a feature length movie of its own (this is the first feature film of Paul Solet). And maybe that could explain some of the film's flaws. Some subplots seem unnecessary and overextended, like the one regarding an old love affair between Madeline and the midwife (an old school's friend). Nonetheless, the first segment of the film works really well creating the initial setting. The pregnancy, the car accident, the discovery of Grace's nutrition peculiarities...all of that works and Solet delivers a great direction. But just when you think all the pieces are in place for a wonderful horror film, the story starts moving into a serious psychological drama of sorts. Yes, the film still features horror elements (I mean, we're talking of an undead child here) but I think we could strip those elements away and we still could get a film very similar in its themes.

I'd also like to emphasize the work of the leading actress, Jordan Ladd. She's the one who carries the movie's weight on her shoulders, and she's really superb. Her performance of Madeline's just perfect, so if this movie works is thanks to her. Maybe Grace can't stand to the high expectations - to be fair, I don't think Solet can be blamed for any of that - but surely Paul Solet (director and writer) displays some very interesting ideas, and  I'll definitely keep an eye on his future works.