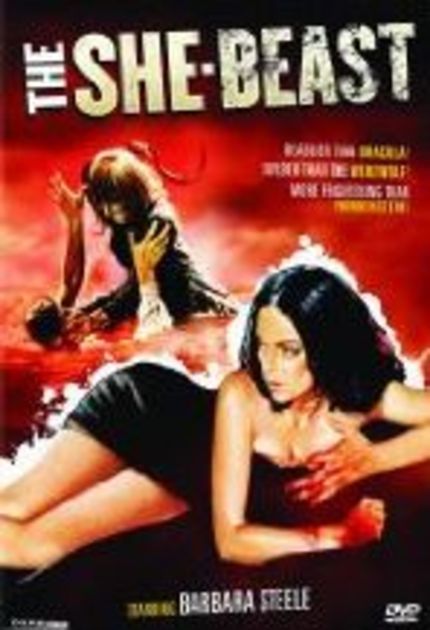 This DVD of The She Beast is movie gold. Why? Is it those Brit on the cheap production sensibilities? The fact that it is the second of a mere four features directed by the late greatly lamented Michael Reeves? The plot that combines lame satire of Eastern European communism, witchcraft and curses, Van Helsings great great grandson and young love? The bad English overdubs? The Barbera Steele Ian Ogilvy commentary track? The answer is yes, yes, oh be still my beating heart YES, TO ALL OF THE ABOVE!!!

Brit Michael Reeves died at the tender age of 26. But before he left this mortal coil he managed to make not only this hilariously entertaining clunker but two undisputedly very good films. Not bad for a guy who only made for total movies. Even the forgettable Castle of the Living Dead boasts the film debut of Donald Sutherland. His other two films are far more accomplished. After The She Beast he made The Sorcerers with a very old, very sick, Boris Karloff. t was one of the last times in his illustrious career that the horror veteran would be treated in the manner he deserved during a film production and the highly atmospheric end product was well worthy of his talents. And though Vincent Price reportedly had a horrible experience on Witchfinder General, the end-result was one of the most memorable Price films ever.

This is pretty unforgettable as well although that might be at least in part from the fact that it hasn't aged quite as gracefully as Reeves other efforts. Steele spends a lot fo the film being ogled or in a fright wig and mask shrieking and stabbing people. Trust me. This is wonderfully entertaining. For those who ‘d like to know more about Reeves and the production of his films I’d highly recommend The Remarkable Michael Reeves His Short and Tragic Life by John B. Murray. It’s published by the good folks at Midnight Marquee who are responsible for a lot of hard to find genre info making it’s way into book form.

Meanwhile praise goes out to Dark Sky Films for a great release of a vintage classic.