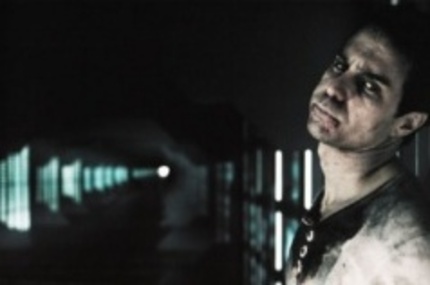 The following statement is true but it might be hard to believe. There is a serious science fiction movie headed for theaters in 2009 that does not feature guns, monsters, zombies or CG enhanced, slow-motion martial arts fight scenes. Duncan Jones' Moon is a beautifully rendered science fiction thriller that pays homage to seminal genre films such as 2001: A Space Odyssey while delivering an original, character driven story.

In some not to distant future, it is discovered that rocks on dark side of the moon absorb fusion energy from the Sun. The gas extracted from rocks, known as Helium 3 (HE3) is the solution to the Earth's energy crisis. Corporate giant Lunar Enterprises establishes a moon base to harvest H3. Sam Bell (played by Sam Rockwell) is the sole employee on Lunar's moon base. His companion is GERTY, an intelligent industrial robot (voiced by Kevin Spacey) that runs the base. Near the end of his three year contract, Sam is hurt in an accident. When he wakes up from a lengthy coma, he begins to realize that the situation on the moon base has changed in a way that threatens to postpone his return to Earth forever.

Moon goes to great lengths to invoke the look and feel of classic science fiction. The set design and the exterior scenes on the moon's surface recall a range of works -fi including 2001:A Space Oddysey, Alien and even Space: 1999. This kind of homage bleeds into the story through numerous references. For example, GERTY bears more than a passing resemblance to HAL 9000 from 2001. Instead of the menacing red LED, however, GERTY boasts a small screen that displays emoticons in reaction to Sam's thoughts.

The heavy use of film references goes only so far without a solid narrative (e.g., Danny Boyle's Sunshine) or some original ideas. Luckily, Moon uses all of its stylistic influences to service a smart, suspenseful script that emphasizes characters and story. The stripped down scenario mainly focuses on two characters: Sam Bell and GERTY. It is difficult to describe Rockwell's performance without revealing major plot points but he expertly handles a rather tricky role.

Some might find that the element of homage overwhelms the film but between the engaging narrative and Sam Rockwell's performance, Moon is a rare kind of movie that works from the opening scene to the end credits. Sony Pictures Classics plans to release Moon theatrically on June 12th, 2009, which is just a few weeks before Transformers: Revenge of the Fallen is set to crowd multiplexes across the world.