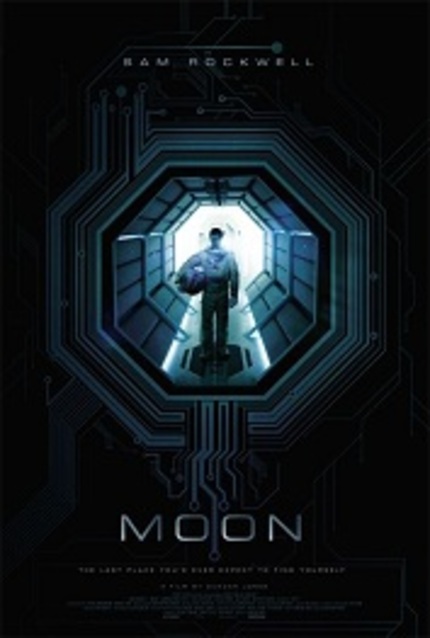 [Though Duncan Jones' Moon has already had its US theatrical run, its appearance at the Sitges festival seems a good opportunity to revisit one of 2009's little movies that could ...]

Duncan Jones' [i]Moon[/i] finally reaches cinemas - a small, subtle and serious science fiction film the antithesis of everything Bay or Bruckheimer, with Sam Rockwell as the lonely astronaut struggling with his demons on the far side of Earth's satellite. No robots, no thunderous pyrotechnics, no saving the world; is this a quiet moment of triumph or a forgettable blip on the radar? Review after the break.

Whenever a small-scale, independent-spirited genre film sneaks through the Hollywood studio system and manages a cinema release, the instinctive response is to cheer on the underdog - applaud restraint and maturity in place of watching things explode. Duncan Jones' debut feature [i]Moon[/i] seems to be worth championing. Everything about it suggests this is a triumph of serious-minded science fiction - a bravura one-man performance, production design that pays obvious tribute to the glory days of cult filmmaking [b]and[/b] the pillars of the genre and a narrative almost theatrical in its simplicity, like some classic short story from two, three decades ago.

[i]Moon[/i] takes place in some indefinite near-future where the discovery of miracle power source helium-3 has seen the end of the Earth's energy crisis. Sam Bell (Sam Rockwell, [i]Choke[/i], [i]Matchstick Men[/i]) is an astronaut, an employee of the giant multinational that supplies the planet's power. Working the mother of all long-haul shifts he's spent nearly three years on the moon overseeing the automated mining machinery which extracts, processes and dispatches helium-3; with no real-time link to Earth his only source of companionship is the station's AI Gerty (a wistful, laconic voiceover by Kevin Spacey). As the end of his contract arrives, Sam's thoughts turn to finally returning home - he's lonely, desperate and starting to hallucinate - but then unforeseen circumstances leave him wondering whether the visions in his head are a sign things have gone even further downhill than he imagined.

It's not spoiling much to clarify yes, Sam Bell has to carry [i]Moon[/i] and Rockwell turns in one of the performances of his career - long under-used, the actor impresses here virtually every moment he's on screen (as in most of the film). Wryly funny, he's likeable and eloquent, conveying as much through silence, facial expressions and body language as he does with his dialogue. It's a role which demands some very distinct changes in the character's personality and Rockwell manages this well enough it's difficult to imagine anyone else being quite so effective. Spacey's voiceover as Gerty is a rare high point in a very rocky career path of late - with no way to communicate other than through emoticons on the computer's tiny screen (a smiley face, a frown, tears) he manages to convey a startling amount through little more than a placid monotone.

The lunar station is a wonderful piece of work, a lo-fi series of bland white spaces that echoes classic science fiction cinema or even British television from the seventies or eighties. There's a commendable heftiness to the systems and machinery that suggests a practical basis for everything, yet enough of a ramshackle, jury-rigged atmosphere it's easy to empathise with Bell's ordeal. [i]Moon[/i] travels out onto the lunar surface, too - several key plot points demand it - and the model work feels pleasingly chunky, the rovers and mining vehicles filthy great white hulks that also leave the older viewer waxing nostalgic for toys from bygone decades.

The problem is that beyond clever visuals and two impressive performances there simply isn't as much to [i]Moon[/i] as the filmmakers think - or rather that it's difficult to pin down whether the filmmakers realise precisely how empty the story is. Anyone even vaguely familiar with classic science fiction will have seen or read something similar already and Nathan Parker's screenplay seems caught between acknowledging this or pretending there's more to the narrative than is immediately obvious. One key moment early on is the story's fatal flaw; should the viewer consider what just happened for longer than a few seconds, ask what the director isn't showing them and why, the rest of the plot is telegraphed practically there and then.

To Jones' and Parker's credit they seem aware of this, because the script then promptly makes reference to further plot points before they're explicitly confirmed. It's a bold gambit but still one that doesn't really work, largely because no matter how the duo dance around the central idea or how well Rockwell plays the role, nothing that happens adds anything further to an idea that just sits there. There are neither extra layers, nor further depth to the story - you thought [i]X[/i], but really [i]Y[/i] - nor does all the banter and genial philosophising tell the viewer anything they weren't aware of fifteen minutes in. The ending, too, feels horribly anti-climactic, with little genuine tension beyond that prompted by Clint Mansell's overenthusiastic score.

[i]Moon[/i] is a bold film, and an entertaining one, but it doesn't feel especially successful. It wants to be a grittier, earthier [i]Solaris[/i] or something similarly cerebral, but it's far closer to, say, [i]Iron Man[/i] - it simply doesn't possess anything of any lasting impact beyond some inventive production design and a charismatic, talented lead. It's witty, decent and charming enough putting the boot into something so good-natured elicits a stab of genuine guilt, but the fact remains this is a fairly empty genre exercise which goes nowhere and says nothing truly distinctive or memorable. For those sick of vacant summer blockbusters it's doubtless going to seem alluring nonetheless, but the problem with a film offering so much more is the disappointment is that much greater when it fails to live up to expectations.