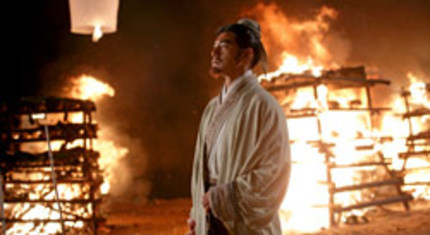 It's been a six month wait for the second and final half to John Woo's magnum opus Red Cliff, and for those familiar with the classic but have not watched the first installment, the director doesn't waste time in bringing you up to speed with an excellent summary, so much so that the transitional technique used was carried over to the main movie proper. And for those who complained about the pigeon soaring over the sky overseeing a football game at the Cao Cao (Zhang Fengyi) camp, there're perfect explanations for those too.

Yes, just when you think it was frivolous of Woo to have added his signature pigeon shots just for the heck of it, you'll be more than pleased to know that the feathered friends do serve a valid purpose here, as does the football match which introduces a sub plot which again I suspect will give way in the truncated version meant for Western markets. We continue where we last left off, and get to see Vicky Zhao's Sun ShangXiang in an expanded role which is crucial to the overall plotting and strategizing of the finale battle, knocking a bit of the shine off the well known characters of Tony Leung's Zhou Yu and Takeshi Kaneshiro's Zhuge Liang.

But don't fret, as there's still ample and well known episodes where the two men get to show off their cunningness and shrewdness in getting their respective one-ups against their common rival. But alas Zhuge Liang gets to become a clear second fiddle here, since he's all brains but absolutely no brawn, and get left out of fisticuffs, putting his firm grasp of mother nature to the test, that the elements also play a fair bit of tipping advantage. Fans of the character though will smile at recognizable anecdotes presented that have given rise to Chinese proverbs.

By now, one would already know that Zhou Yu is the primary focus of the show (I think Chow Yun-Fat is regretting), given that he's a well rounded man blessed with brains and brawn, and a beautiful wife to boot too. He's honour and duty bound to protect the southern territory of Sun Quan (Zhang Chen), but this becomes something more personal when Xiao Qiao (Lin Chiling) takes it into her own hands to buy the defenders some time by crossing over to Cao Cao and to play the proverbial beauty capable of mesmerizing the prime minister. And her performance in this film was a lot more effective than the last. In fact, the two female characters get meatier roles to play, and for someone like John Woo, I can't remember the last time where he had strong female characters in his films, so this was a treat.

Somehow, Red Cliff II ended with a whimper unfortunately, which is a pity. The build up is excellent par none, prepping the audience for the big showdown. Those who had lamented the lack of big battle sequences in the first film, well, you can continue to lament as this one only had ONE which takes up almost the last hour. It's execution, pure and simple, putting into motion what has been planned, and the relentless clockwork that every plan had to follow. While the first film had provided for the famed generals of Liu Bei to each have their individual show pieces to highlight their fighting prowess, this one had none as most of the lead characters got relegated to support status, except for Zhao Yun (Hu Jun) whom John Woo has an affinity for.

Fans of Woo's style will see his signature stamped in a lot of action sequences here, which were muted somewhat in the first installment. With Zhao Yun and Zhou Yu, one can tell Woo was probably brimming with glee to design the action set pieces for these two warriors, reminiscent of many of his signature brotherhood series, trading guns for swords here. The two trade barbs of camaraderie, and fight alongside each other, feeding off each other's moves. They battle in parallel, perfectly framed as if in split screen, and I think it's inevitable to have the hero and villain in a stand-off, with support from everyone else wondering who will make the next move.

And here's where purists will be up in arms again, because of how the film ended, which went askew from what would have happened, involving both Cao Cao and Guan Yu and that flight of retreat. But I guess if Peter Jackson had some liberties taken, then Woo too should be cut some slack in order to dramatize Red Cliff for the screen. So too would fans of the other characters be upset, because you don't see much of your idols in action here, which mostly got relegated to plenty of pretty fireballs and raging flames on just much everything, and arrows being the weapon of choice for mass destruction here. Individual, stylized fight scenes no longer are the highlight as per the previous film.

On the whole it's been a long while since I'd seen an epic of this scale from Chinese cinema, and thank goodness that the rumoured, cringe-worthy lines of dialogue are just that - rumours and nowhere to be found. Come awards time, I'd expect this film to be raking some major accolades. Despite its minute flaws, this is still highly recommended just to complete the saga, and I am more than curious to want to know exactly how these 2 movies will be pared down to a single film for the Western markets.