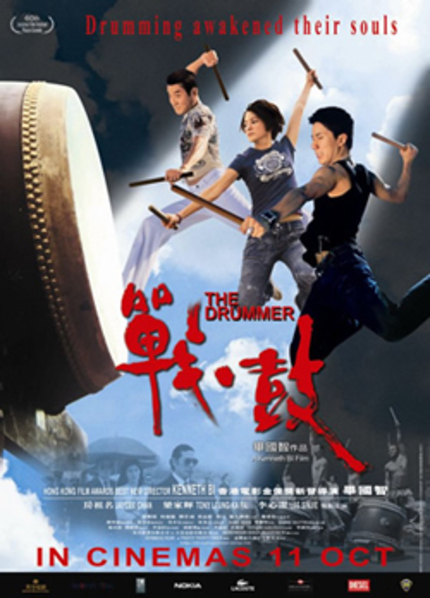 Jaycee Chan is Sid, the son of a small Triad boss who spends his time drumming in a band and fooling around with the woman of a rival gang boss. It is only a matter of time before they are caught and Sid's arrogance gets the better of himself and he insults the rival gang boss Ma. Desperate to save his son's life Sid's father sends him to Taiwan to lay low until things cool down.

One morning Sid awakens to the sound of drumming coming from the mountains. At the end of his hike he comes upon a group of Zen drummers training. Hypnotized by the rhythm of the beat he desires to join the group. He begins his journey of self discovery and growth.

It is clear from the start of The Drummer that Jaycee Chan has a better grasp of dramatic acting than his illustrious father. This comes as no surprise as their film careers have started on different paths. But Jaycee is also given ample opportunity in this film to show tremendous physicality and control that is as genetically passed from father to son as his nose is. Once and a while there is even a hint of his father's comedic and playful side. Sadly for Tony Leung Ka-Fai he isn't asked to do more than give us the same triad gang boss persona that we saw in other notable triad films. Roy Cheung, Kenneth Tsang and Josie Ho, familiar faces all of them in HK cinema, are relegated to familiar and unremarkable characters.

The real joy in The Drummer comes with what I really want to dub 'Percussionist Kung Fu'. In these great moments we get to watch the drummers train. I felt it was not all too dissimilar from watching old Shaw Bros Kung Fu movies. Part of the group's training is in Kung Fu in fact to help create harmony between body and spirit. The connection with nature is strongly emphasized as well. It is even focused on to the moment when the drum group charters into Hong Kong to perform and the noise of the city is overwhelming. Though they are not fully segregated from modern culture this is still a moment of culture shock after the serenity of the training village. The landscape of rural Taiwan is gorgeous and Bi makes the most of this natural canvas on which to paint his picture. It is not difficult to make that connection between body and spirit when you’re surrounded by the beauty of nature. The magic of The Drummer happens when the story takes place in the training village.

Where The Drummer struggles though is with the flow of the story and narrative has some inconsistencies. Too often it felt like story lines were left hanging and briefly touched upon as if to say we've still got a grasp on it, hold on, we'll get back to it eventually. As stirring and powerful as this film wants to be it has these bewildering moments of melodrama that upset the serenity of it. I want to say that it represents the disruptive nature of the progressive world hitting against the aspiring Zen mind and spirit but this is a loose justification and a vain attempt at redeeming the film. There were also some very odd choices in the editing room; most obvious during the training montages which cut back and forth too quickly to really appreciate the training process or the skill needed to participate in it.

The Drummer was hit and miss for me. It hit it when we were drawn to the Zen drumming. It missed when it parlayed off into the melodrama and the story got bogged down. Unfortunately there was very little to recover after that.

More about The Drummer