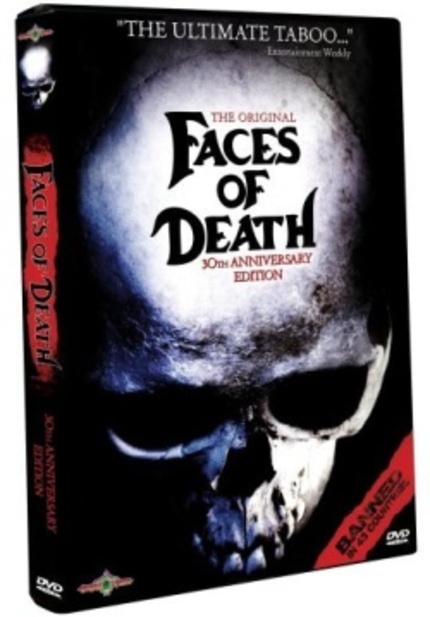 Notoriety can be a boon, and the best example of that is the movie "Faces of Death". To say the video version of it was famous in the eighties is a major understatement!
My classroom could be divided into two groups: the people who had seen "Faces of Death" and were bragging about it, and the people who didn't want to see it and thought it was disgusting.

Even now, thirty years after its original release, few people I've mentioned this title to have seen it but everyone seems to have heard of it. Even when they're not sure of the title, you'll surely get a reaction when you mention "people clubbing a monkey to death and eating its brains". Ah, THAT movie!

I was always in group number two. I thought watching real-life footage of people dying just to satisfy your morbid curiosity was disgusting and in poor taste at best, and criminally vile at worst. So I wasn't exactly jumping for the chance to review this disc, until I heard about (of all things) the commentary track.

For this edition's greatest virtue over previous versions is that director Conan LeCilaire finally tackles all controversies concerning the footage in this film, and candidly divulges which parts are real and which are fake.
Indeed, this is a prime example of the extras being better than the film, and I go as far as to say that in this case they actually warrant the purchase of this movie if you have any interest whatsoever in exploitation cinema, documentaries, mockumentaries or just plain horror.

More after the break!

I tried to keep the pictures as decent as possible, although I was tempted to go for the full gross-out...

In 1975, the Italian mondo-movie "Ultime Grida Dalla Savana" ("The Great Hunting") which showed explicit footage of animals being killed, proved remarkably popular in Japan. Because of this, Japanese distributors contacted Conan LeCilaire with the following question: could he, being connected with production companies which made nature documentaries, provide a movie with lots of footage like that?
Conan was intrigued and offered to try it, but thought you could up the stakes a bit by making human death the main subject, instead of animal death. The distributors agreed: "Faces of Death" was made and in 1977 released specifically for the Japanese market.

It became a huge success in Asia, even outperforming "Star Wars" in some cities. While it didn't get theatrically picked up for the United States (well, not at first anyway) one distributor did release it on videotape and an eighties legend was born. "Faces of Death" became one of the most notorious, controversial and talked about titles ever released, earning money like you wouldn't believe and spawning many sequels and ripoffs.

David Cronenberg look-alike Doctor Gross has seen so many people dying during his medical career that he has become very interested in death itself, and started collecting film footage of different aspects of it. He likes to share his findings with us, the audience.
Several segments follow, some with real footage, some as fake as the Doctor (who is an actor), but all are narrated with deadly seriousness to remind us this is a documentary and we are NOT watching this for exploitation's and/or entertainment's sake.

I once asked my mother, who is interested in all things occult, if she would like to go see a performance of a stage hypnotist who claimed he could make people behave like a dog. When she declined I was rather surprised and asked her why. She told me: "Because if the performance is real I think it is demeaning to the humans involved, and when it is faked I think it's just stupid."
This answer might just as well sum up my feelings for "Faces of Death".

The movie consists of nearly two hours worth of segments, each showing an aspect of death. This can mean animals being slaughtered (koshering especially looks rather nasty), reenactments of people being killed in various ways, or actual stock footage of dead people. The actual footage, of both animals and people, is pretty gruesome. Seeing the smashed skull of someone who died in a motorcycle accident does leave an impression of sorts.
But often this footage has been edited together from various sources, taken out of context, without regard for (or permission of) the dead person's acquaintances. That's impolite to say the least. And as funny as the misconceptions have been about which parts were real and which were reenacted, the truth is that by not telling this in advance, the audience was being shammed. Again, rather impolite.

When Doctor Gross starts talking and some impressive nature photography is shown, you might at first think that there is some thought put behind all the shocks, that the movie is actually trying to tell the audience something about death and people's perception of it. The attention to detail is sometimes remarkable, which caused the confusion about which parts were real and which were reenacted.
But after the first hour has passed, boredom sets in as the Doctor fails to make a point and keeps dragging segment after segment out of his collection. It really IS just a row of faces of death. The worst part happens near the end, when stock footage of the holocaust and famine victims in Biafra are shown.

Come on!
That's pretty hard to defend as entertainment, no matter how hard you presume to be a serious documentary.

Which makes "Faces of Death" a film which tries to shock and bamboozle me, with various degrees of success. I find both ways rather cheap methods to try and keep my attention.

Time also hasn't been too kind to it. Upon its release, there was no such thing as the internet available for the morbidly curious, but now you have several sites dedicated just to showing the sort of materials for which "Faces of Death" got to be famous.
When I finally saw the famed "monkey brains" sequence, what struck me was not the plight of the monkey or the gore, but the terrible narration and how old the movie suddenly seemed, almost like a fifties Disney documentary (albeit with somewhat more blood).


Conclusion about the movie:

It was always a work of extremely bad taste, but now it has dated beyond belief as well. As a teenager back in the eighties, seeing this movie was a dare, but now...
Many of the segments have lost their ability to shock, or can easily be recognized as fake by today's more media-savvy audience. Interesting as a curious bit of film history, but nothing more.

Given that most of "Faces of Death" consists of blown up 16mm footage, the image quality is quite good. Sure, it is as damaged and blemished as always, but it is supposed to look that way.
The audio sounds muffled for both (stereo and 5.1) soundtracks, but it fits the dated and semi-illegal look of the movie so I'm not complaining.
Gorgon Video even scores bonus points here by not only providing subtitles, but using one of the weirdest fonts I've ever seen. They really seem to have come out of a thirty-year-old typewriter, and have a burnt-in look to them even though they are removable. A very nice touch!

Next are the extras, and these are good. As in Criterion good. Starting with one of the best commentary tracks I've ever heard.
Director Conan LeCilaire and moderator/horror film expert Michael R. Felsher (who is slowly turning into a seal of quality for extras on horror DVD's, having done so many good ones) discuss the movie at length. Conan turns out to be a great storyteller with a great voice, and he is neither arrogant nor particularly repentant. It's a relaxed and easy track to listen to, with both speakers pointing out bits left and right, what works now and what doesn't, the impact of the video release and the controversies surrounding the movie. Together they reveal loads of interesting facts which are often incredibly funny. Definitely the high point of this disc, and watching "Faces of Death" with this track on is infinitely more rewarding than seeing the movie without it.

Furthermore there are also two documentaries on this disc, and both of them are short but good.

First up is "Short Cuts With Editor Glenn Turner", which lasts 16 minutes. Mr.Turner describes how they got the stock footage, and the terrible job which followed when they had to edit the stuff together. He has no love for the end result (calling it "hokey" when seen today) but describes it as a product made for a specific market at a specific time, about which he is of course right. An interesting addition to the commentary track, Glen Turner sheds even more light on the movie.

The second documentary is "The Death Makers With Special Make-up Fx Creators Allan A. Apone and Douglas J. White". For 22 minutes these two describe in detail how the effects were done for some of the key segments (most impressively their stellar work on the monkey brains). Bizarrely, they also tell how they suddenly stumbled upon a real corpse which indeed made it into the movie.

Seriously, how warped must your karma have been to have your missing body found by the special effects film crew of Faces of Death? Weird...

Next is the original trailer, which is just as questionable and disgusting as the movie itself.

Next are a selection of outtakes, which are even worse, as this bit combines extra slaughterhouse footage, funny behind-the-scenes footage of the reenactments, and extended footage of the crew finding the real corpse and the police arriving to take care of it.

Finally, a deleted scene is included. This segment (an execution by gas chamber) was not in the original Japanese cinema release but was included on the video, so for completeness sake it is good to see it here as it's actually one of the most interesting parts.


Conclusion about the DVD:

How do you make your DVD a must-have, even if the main movie itself is crummy? Look no further than this disc.
An awesome selection of extras, with people telling candidly about what they did, why they did it, how they did it, and whether or not they now think it's crap.
These extras elevate "Faces of Death: 30th Anniversary Edition" from just a DVD with a dated bad movie, to a document which gives loads of insight into the nature of exploitation, the timeframe of the eighties, and practical effects work in general.

Just as the documentary "Inside Deep Throat" is far more interesting and entertaining than its subject "Deep Throat" is nowadays, so are the extras on this disc the real meat here. The fact that the film itself is also on the disc is sort of a nice bonus.

So even though I'd give the movie itself a wide berth, this disc gets a very high recommendation from me!

You can order this edition through our affiliate.