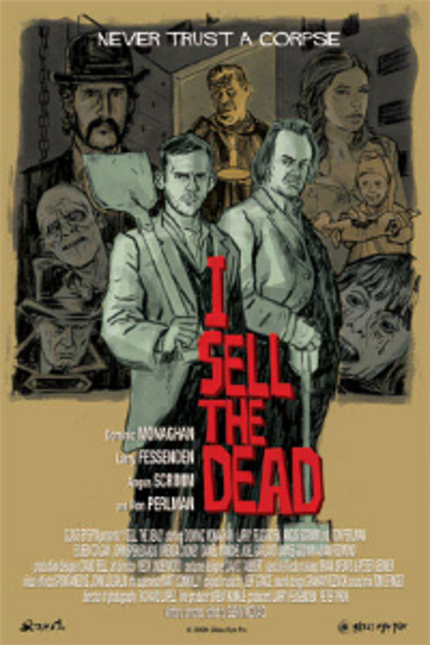 Somewhere in England in the 19th Century body snatchers Arthur Blake [Dominic Monaghan] and Willie Grimes [Larry Fessenden] have robbed their last grave. Willie has already had his date with destiny with the chopping block and with just a few hours before Arthur follows he recounts his life story to Father Duffy [Ron Pearlman]. As Arthur talks about his early upbringing, developing the skills of the trade he also accounts for some truly bizarre occurrences and we learn that not all corpses are equal. I Sell The Dead presents a unique point of view of a life of crime in 19th century England. It is not very often that you see a grave robbing film that also has zombies, aliens and vampires in it. This horror comedy from director/writer/editor Glenn McQuaid gives us just that.

Told as a series of reflective vignettes, each story getting more and more bizarre, Arthur tells Father Duffy of the events that ultimately led to their arrest. They were once grave robbers for Dr. Vernon Quint, played by horror film icon and gentleman, Angus Scrimm. Quint is not so much an important piece of the puzzle but it is damn cool to see this icon on the screen including a scene where he performs a sonata on the violin. While on the topic of icons Ron Pearlman is also relegated to supporting role in this film but he is still an enormous presence on the screen only dwarfing the seemingly impish Monaghan as they sit across from each other in the cell.

Where the real goods happen is when Monaghan and Fessenden are on screen together. They pair up very well and play off each other so well that one cannot help but imagine that with stronger material this sort of horror comedy routine could have been comparable with great duos like Abbott and Costello whose comedy monster films are the stuff of legend. And while McQuaid's script does have its inspiring moments I found it fairly predictable, which is a shame. Crap, it was like I was prophetic and could predict which jokes and gags were coming thus quelling their comedic impact. I'm not saying McQuaid was following the rules of British comedy but there was little that I didn't see coming. This absence of original comedy was disappointing. What could have been the reinventing of the buddy film, immersing it in the blood and shock of horror cinema, played out fairly flat a lot of the time.

As far as the horror elements of the story are concerned they are centered around some of the stronger comedic moments of the film and do provide the bigger laughs. And there were some great laugh loud moments. When the tag line says, Never trust a corpse, McQuaid's script does provide excellent reasons for second guessing a career in grave robbing. But I Sell The Dead is not without strong horror scenes and a good amount of blood letting. Neat. Makeup and special effects are mostly good and McQuaid does dress up a pretty set, converting New York into 19th century England complete with taverns and funeral parlors. Production and art direction are not weak points in this film, everything looks great.

Good but not great. Still, it gives hope for the future of McQuaid. He has a good little movie here. For me if fell short of awesome but there is enough interesting stuff in his film that I would gladly see what else he has coming up.