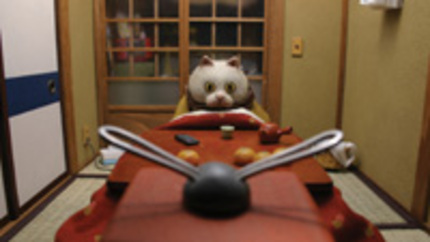 If someone were to say that the only good animations from the Japanese were the animated movies and television series coming out of the studio system they would be wrong. The Emerging Auteur Animators program is proof of that. The program has 16 shorts, all very different in style and execution, covering such themes as sexuality, a call for unity amongst all creatures, loss of a friend and honesty. Others simply exist to display technical achievement and visual style. They go by quick so if you catch this program during the festival keep your wits about you.

Standouts include Nakedyouth for its combination of animated characters with live backdrops and its compelling content, a young man coming to terms with his sexual identity. Pika Pika 2007 is jaw dropping. It is a shame that you’ll only get to see it once as there is so much that happens in a single frame. I wouldn’t call it a disadvantage that it is a busy animation but there is so much happening between the foreground and background it is easy to lose track of what you’re watching. The Thaw is interesting in that it plays very well with light and shade and it’s almost sinister in its execution that I was surprised that I jumped at the end of it. It is very dark for such a brightly lit short. And you cannot go wrong with Kotatsuneko when a pissed off cat cannot reach the television remote control. Good times. And finally, we have written about Franz Kafka’s A Country Doctor around these parts so it was good to see it. Visually captivating and it has almost a rural gothic feel to it. It too has a dark edge to it and it will be a nice way to cap off the program.