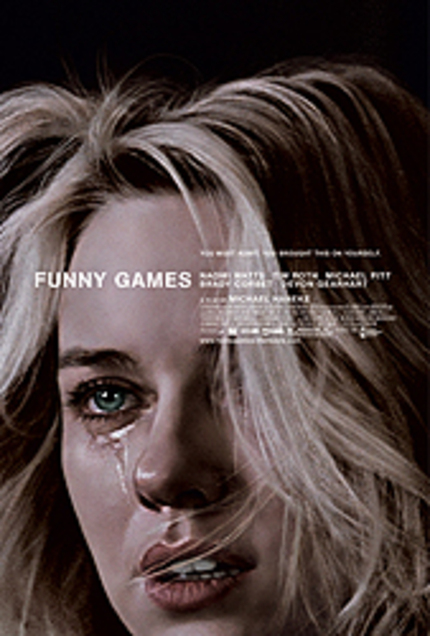 I present to you one of the braver choices a filmmaker has made in recent memory and a film that, while far from commercial- I don't think this will make a dime- is more urgent than a hundred other recent "thoughtful" horror films. Director Michael Haneke understands not only that we are being played with by those who promise safety and security that isn't theirs to give but that those who threaten that security look an awful lot like us and our children.

Michael Hanekes English remake of Funny Games marks the latest in a series of recent horror releases that just may spell a significant upswing in quality for the American Horror Film. Fans of international horror cinema will tell you (and they are probably right) that there hasn’t been a significant quality dip worldwide but the remake of all those Japanese and Thai films (see Shutter, The Eye, etc., etc. ad nausea) bad recutting/dubbing of French efforts ala’ Haute Tension, and the constant sins of Hollywood against its own horror history through stultifying remakes of The Hills Have Eyes, Halloween, When A Stranger Calls, The Amityville Horror and countless others has meant slim pickings stateside unless you’re willing to dip into the notoriously unreliable direct to video pool. But if all Funny Games the remake were was a solidly done remake it would hardly qualify for inclusion with other well above average recent horror efforts like, Cloverfield, The Signal, and Diary of the Dead

Instead Haneke has gone back to the story with an English cast specifically to address the film’s intended audience, an audience that increasingly embraced violent movies for the visceral thrills they provide while ignoring the larger contexts, themes and ideas that make some of those movies worth watching more than once. Critics will argue back and forth over whether Haneke has done anything to improve the film but the plain truth is, even though this film is a virtually shot for shot remake of the original it is still one of the most relevant films of the last decade in the way it addresses film violence.

The story centers on an average upper middle class family whose gated vacation home seems like the safest place on earth. Together with the family pet they arrive expecting a quiet idyll only to find themselves at the mercy of two upper middle class teen sociopaths who may or may not be idling around the lake killing families just like themselves. The more the hostage family tries to placate them the farther the two spoiled thugs take things making it clear they have no intention of the family getting out of this alive though they do plan to play plenty of ‘funny games’.. And through it all, the killers take opportunities to speak directly to us the audience looking into the camera , breaking the so called fourth wall and even waiting a bit so that we can process what has just happened.

Just as Diary of the Dead recently observed that we don’t slow down at car accidents so that we can help the victims, but only so that we can look, Funny Games offers us a tragedy to look at with the understanding that a price of some type may be exacted. Do we have any relation to anyone in this story above and beyond our desire to be entertained according to the rules of the genre? It is a question that is so pertinent to our culture and our time in the US that I can only applaud Haneke for having the guts to make this film instead of capitalizing on the critical mass praise for Cache by going more commercial. This is an artist who has earned the right to help us continue this important discussion not just about film violence but what our obsession with it is really all about. What draws us in? What keeps us there?

I’ll readily admit the film doesn’t go much deeper than that because that’s the point. Most viewers aren’t ready to go any deeper because most viewers aren’t thinking much in the first place. The amazing thing about Haneke is he’s managed to make a gripping suspense film with a foregone conclusion. Like the person who slows down at the accident knowing that they will see (or are hoping to see) blood, hair, bones, teeth, brains, etc. we are captivated but do no personal inventory, we are on no of the moment moral journey, we are existentially static. It is as if our car, our conscience, has crashed and we are staring at our own humanity dead and bleeding on the pavement struck dumb by our complicity in our own permanently arrested development. In Haneke’s universe it is not the extremist idealogically motivated terrorist who may sneak into our city that we should fear the most but the perfect stranger with no motive at all.

I can almost hear Haneke chuckling about how quickly most viewers miss the point when they say the characters and situations are all stock. Of course the characters are no more unimaginative than any of us. Far from being faceless clones lifted from other films Haneke’s young thugs show the masquerade of polite society is not in the effort we make to be polite but in the belief that that effort is a sufficient antidote for evil. School shootings? Suburban gangs and rampant drug use? One out of four teens carrying around STDs? The problems of our failure to pass morality and civility to our proceeding generations is indeed so huge as to be best represented by facelessness.

Evil shocks by its very banality, Hanekes refusal to make the evil in Funny Games submit to reason or genre conventions right at the moment when the story would seem to demand it is incredibly insightful. The same can be said about the goodness of the victims in this story. They are not victims for any reason whatsoever. Neither are they especially enobled by their suffering. This is the thing Haneke wrestles with, the thing we wrestle with. People suffer everyday and we cannot see the reason. Yet we wonder at the violation of something good by what is clearly evil. The two modes exist and demand contemplation. But that’s something we don’t do anymore in American genre cinema or at least something people like Eli Roth and Adam Green and others who make bad horror movies don’t do well. I’d rather watch this a hundred times than Saw IV, Hatchet II, Hostel III or any of the other dreadful horrors guaranteed to come out in the next year.

And I would say something else to the critics of this film. Every single one of you that I’ve spoken to has roundly praised the performances of the film. What you mean by that I can’t say since you dismiss the film as hack work, slumming by an otherwise gifted social critic and storyteller. Perhaps you mean you were momentarily moved. My argument is we all need to examine why it takes so much to move us. Michael Hanekes Funny Games US moves me because entirely similar events take place in real life everyday with no regard for entertaining anyone, or satisfying the ‘convention expectations’ of anyone except those who perpetrate funny games on the innocent.