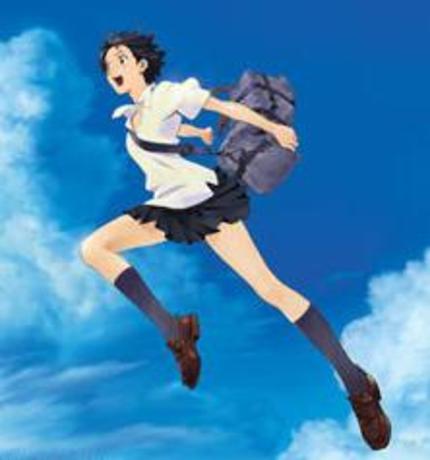 Madhouse is fast on its way to becoming my favorite animation studio at work in Japan at the moment. Not an easy thing to do when the competition consists of institutions like Ghibli, IG Productions, and Studio 4C (and even Studio Gonzo had an unusually strong moment with their "Brave Story"). But with two stellar productions like "Paprika" and "The Girl Who Leapt Through Time" released in quick succession, Madhouse has my mind reeling a bit. Astonishingly both movies boast budgets which, while certainly decent, can be considered fairly low in this industry.

Paprika has been extensively covered on this site, but "Tokikake" aka "The Girl Who Leapt Through Time" was flying deep under our radar until James Maruyama wrote a review of it. The release of the recent English-friendly (and fairly budget-friendly) Korean editions gives me a fine excuse to add my two cents to James' excellent review, even though I lack his extensive knowledge about the many earlier incarnations of this story and its source material. Tip: a REALLY budget-friendly (with English subs but otherwise pretty barebones) version will be released on the 4th of October, courtesy of Hong-Kong.

My shortest review would be that this movie blew my socks off by being so much better than I expected. I hoped for pleasant drama but I got a lot more, and only time (haha!) will tell exactly how high in my list of personal favorites this one will end up.

For a somewhat longer review and DVD details, read on.

Like "Paprika", "The Girl Who Leapt Through Time" is based on famous Japanese Science Fiction literature, this time the short story Toki o Kakeru Shojo (The Little Girl Who Conquered Time) by Tsutsui Yasutaka. After many manga, tv and cinema adaptations of this story something fresh was tried: this new anime version of "Tokikake" became a sequel of sorts to the original tale (instead of another re-telling) with a different story, a different protagonist and a more recent setting.
Director for this new take on a beloved and well-known story was Mamoru Hosoda, who we know from... from... well... "Digimon: The Movie" and the fact that he walked away from Ghibli's "Howl's Moving Castle" at a rather late stage, after which the great Hayao Miyazaki himself jumped in and finished the film.

This doesn't seem like a recipe for success, but nevertheless that is what it became: even though "The Girl Who Leapt Through Time" got a small theatrical release in Japan it received rave reviews and quickly gathered followers, acclaim and finally a slew of awards, topped with the 2006 Japanese Academy Award for Best Animated Film. Wow!

Student girl Konno Makoto has a very bad day. Everything goes wrong and to top it all off in the afternoon she dies in a lethal accident... only she doesn't.

In fact, she finds herself transported a few seconds back in time and manages to avert her deadly fate. As Konno slowly discovers, she has acquired the power to jump back in time and change things at will!
Soon, she starts the whole day over, but this time without errors, only to discover that sometimes her winnings are someone else's losses. Before she knows it she's busy cleaning mess after mess. And when things go from bad to terrible she suddenly finds out there is a limit to her time-jumping, possibly leading several loved ones straight into great danger.

Where to start? Well, as this is an animated movie, let's start with the animation. Studio Madhouse has delivered stellar work here, and I want to specifically point out the beautiful background paintings. I honestly can't think of a movie which has better animated contemporary backgrounds. No splashy computer graphics here (bar a few very short sequences which seem to say "look, we could have done this for the whole movie but chose not to") but exquisitely drawn static 2D paintings. Any story with short-term time-traveling allows you to use the same scenes and backgrounds twice or more, and obviously this is a cost-cutting device as well, but kudos to all involved for making those scenes beautiful to watch. Designs have a nice balance between abstract and realistic and movements are good.

As an aside, let me note the following.
Even though this movie mostly features a girl wearing a very short skirt, who:
1. jumps all the time,
2. rides bicycles,
3. and falls over a lot,
there is not a single "pantsu"-shot in the movie.
A decision I applaud. I'm not generally opposed to "ecchi" material but here it would have been annoying and inappropriate (for people who aren't familiar with this jargon: it means you don't get to see her knickers).
Well done, Mamoru Hosoda and Madhouse, you knew there was a market for that sort of fan-service but chose not to cater to it!

Then there is the story. I'm fiercely critical when it comes to timetravel stories. You can say I'm a bit of a paradox-fanatic and the moment such a movie doesn't adhere to its own logic it's lost me. A few of the movies that do it right are: "The Terminator" (only the first!), "Primer" and, I'm glad to say, this one. It got me and didn't lose me on the technical side.
Looking at the story itself, "The Girl Who Leapt Through Time" can be seen as a cross between "The Cat Returns" and "Groundhog Day". Unlike Bill Murray's character in the latter, Konno has total control about whether or not to restart (part of) her day but still gets hung up on the consequences of changing tiny details. As for a resemblance with "The Cat Returns": that movie is a harmless piece of barmy entertainment that I like a lot, but it's fluff compared to "The Girl Who Leapt Through Time" when it comes to character development. Konno really grows during her adventure, and that process is realistically shown as slow and painful. It helps that the Japanese voice-acting is excellent, never getting in the way of the audience perceiving these characters as real people.

But where the movie really shines is in the portrayal of teenage friendship, and how it can be both a blessing and a curse when it comes to moving on to something more mature. The whole atmosphere of a small group of pals entering the dating game (and not quite sure whether or not they should exclude each other for fear of losing the friendship) is so well done here, Mamoru Hosoda almost makes it look easy.

In fact, that goes for the whole movie.
It looks like a confident master storyteller was at work here, something I had seriously never expected. The movie is not perfect and some revelations come from thin air, although that seems to be partly caused by trying to adhere to the source material. But it's still very, VERY good, one of the best anime I've seen in ages. And it's underscored with some nice, haunting music as well...

Definitely Highly Recommended!
I didn't know anything about previous incarnations and/or source materials, but I flat-out love this movie. It's "deliberately paced" rather than slow, and beautiful rather than flashy. It may have been that I was underestimating it, but it's spot on with manipulating my emotions (no mean feat) and at the end I had a serious lump in my throat. In fact, with this much quality on display I kept checking for a hidden Hayao Miyazaki credit somewhere but couldn't find it. Did I just say that out loud? Oops!

On to the DVD:

Reviewed here is the Korean 3-disc Limited Edition, and it has to be said the packaging is gorgeous. The box is adorned with the two movie posters, and contains three separate disc-holders and a 70-page booklet. The disc-holders are each decorated with one of the beautiful backgrounds, while the booklet contains full-colour reproductions of most of the stunning paintings used in the film. Also you get a snippet of film containing a couple of frames.
The outer box has a translucent blue slipcover, with Konno's silhouette whited out. I invite everyone to check out the pictures of this set here in the forum.

Video is good, and Audio is very good, with a more-than-decent Dolby 5.1 mix. The English subs are good.
Extra-wise, the good news ends after the film:

Disc one holds the film and some decent extras (like the trailer and the video for the end-credits song), but the Japanese commentary only has Korean subs so that's two languages I don't know.
Disc two holds 45 minutes worth of press-conference materials. No making-of, just shots of the premiere, signing the cd-soundtracks etcetera. Seriously uninteresting stuff.
Disc three holds the film shown as storyboards, complete with the same soundtracks and commentary as on disc one. Bafflingly, you get shown the storyboards as a tiny window in the bottom-right corner, while the "normal" version plays in a far bigger top-left window. Surely this could have been done on disc one as an alternate angle? And again no English subs for the commentary!

Thankfully, the booklet rights a lot of wrongs extra-wise, providing you with many sketches, photographs and reproductions (complete with a guide for finding them in the movie).

James Maruyama excellent review.
Buy this (Pimped!) Korean Limited Edition at our affiliate,
(you can watch pictures of it here in the forum)
or (pre-)order the budget version from Hong Kong, also through our affiliate.

More about The Girl Who Leapt Through Time