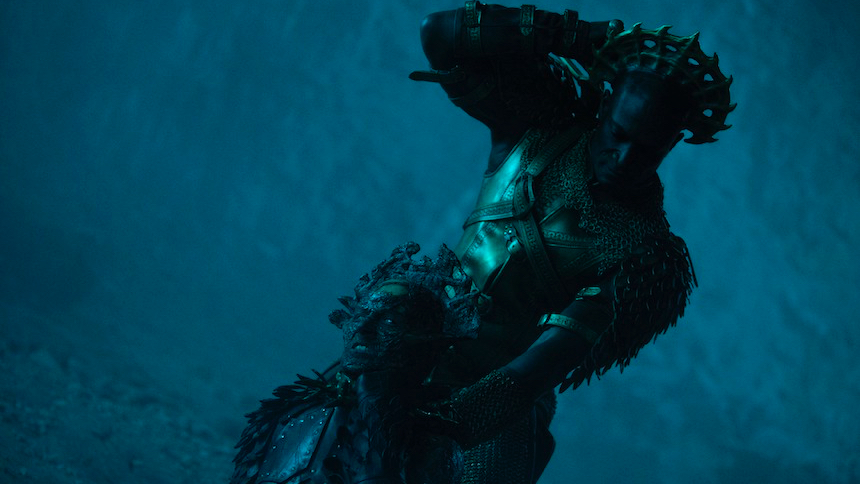 The first sign that something’s not quite right in director Nathan Frankowski and writer Ed Alan’s collaboration, The Devil Conspiracy, appears in the awkward title itself: an apostrophe and “s” appear to be missing.

The “the” also appears to be superfluous. Either way, something feels off even before the title appears on the screen to announce a biblically themed sci-fi/supernatural action-thriller remix. For all its warts and imperfections (and they are, like Lucifer’s legions, innumerable), The Devil Conspiracy deserves credit for its ambitious scope, energetic direction, and go-for-broke mishmash of ideas, some shockingly intriguing, others shockingly awful, and the remainder somewhere in between.

The Devil Conspiracy opens with a seemingly familiar retelling of the War in Heaven, the fall of Lucifer by the sword of the Archangel Michael, and the establishment of Hell, but almost immediately Alan’s screenplay starts to diverge, putting Lucifer in literal chains, powerless to leave the literal bowels of the Earth serving as his eternal prison. Only later — like so much else contained with the brain-melting confines of The Devil Conspiracy, inexplicably — do various winged demons, eager to serve Lucifer for no apparent reason, make an appearance. Topside, a certain subsection of humanity, also without reason, has dedicated itself to releasing Lucifer so he can release Hell on Earth and presumably offer them worldly power as his vassals.

So far, though, The Devil Conspiracy sounds, if not exactly looks, likes like something we’ve seen before, but before long, Frankowski and Alan plunge headfirst into an ever-expanding plot involving Satanists, the Shroud of Turin (the purported death shroud that covered Jesus’s body before his final ascension to heaven), and a Satanist-aligned biotech firm eager to create a clone of Jesus that, due to its pedigree as the Son of God, can become a flesh-and-blood vessel for a newly released, newly reincarnated Lucifer. The same biotech firm also specializes in creating and selling resurrected geniuses (Vivaldi in an early example, Michelangelo) to the highest bidder.

That potentially intriguing subplot, likely inspired by The Boys From Brazil and Hitler-cloning Nazis hoping to start fresh with a Fourth Reich, doesn’t exactly go anywhere. In fact, it goes nowhere. At worst, though, it’s worth a shoulder shrug, especially once the central plot really gets going and a British priest with an Italian surname, Father Marconi (Joe Doyle), finds himself on the wrong end of a sharpened instrument courtesy of the singularly named Liz (Eveline Hall), a silver-haired Satanist and the de facto head of the Lucifer-worshiping cult.

Marconi, however, doesn’t exit stage left or right. Instead, his body becomes the earthly vessel for the Archangel Michael (Peter Mensah), ready and eager to use heretofore unknown special forces training to take on the the Satanists and stop their vaguely defined plan for world conquest.

The flip side of the central plot involves an American graduate art student, Laura (Alice Orr-Ewing), whose luck turns for the worst when she finds herself not at the end of a sharp sword, but overpowered and kidnapped by Liz and her non-orange minions to the Satanists castle keep, which the biotech firm uses for all manner of experiments, including extracting Jesus’s precious bodily fluids from the Shroud of Turin and using said fluids (specifically his recovered DNA) for artificial insemination (cue references to Rosemary’s Baby, Demon Seed, and the Omen series, unsurprisingly minus narrative coherence or internal logic).

While The Devil Conspiracy takes more than a few unexpected left turns, it misses almost as much as it hits, especially during a protracted, if ambitious, third-act climax, that falls short on delivering the implicit promise of a pre-apocalyptic battle to end all  pre-apocalyptic battles. Still, when a massive Silent Hill-inspired, carnage-crazed monstrosity called the Beast of the Ground (Spencer Wilding), appears, ready to do major bodily harm to friend or foe, The Devil Conspiracy fully leans into its pulpy genre-based origins.

Buoyed by better-than-expected visual effects, ace-level production design, and actual locations (the Czech Republic) rather than a budget-conscious reliance on subpar CGI, The Devil Conspiracy rarely looks cheap (often the opposite), ultimately delivering a bizarrely admirable mix of genres, tropes, and ideas, all accomplished with a self-seriousness bordering on camp, intentional or otherwise.

A sequel-ready ending, however, suggests the wildly optimistic financiers behind The Devil Conspiracy hope its commercial success will lead to a series, maybe even a franchise. Thanks, but no thanks.