Review: SHRINKING, Laughing Through the Tears 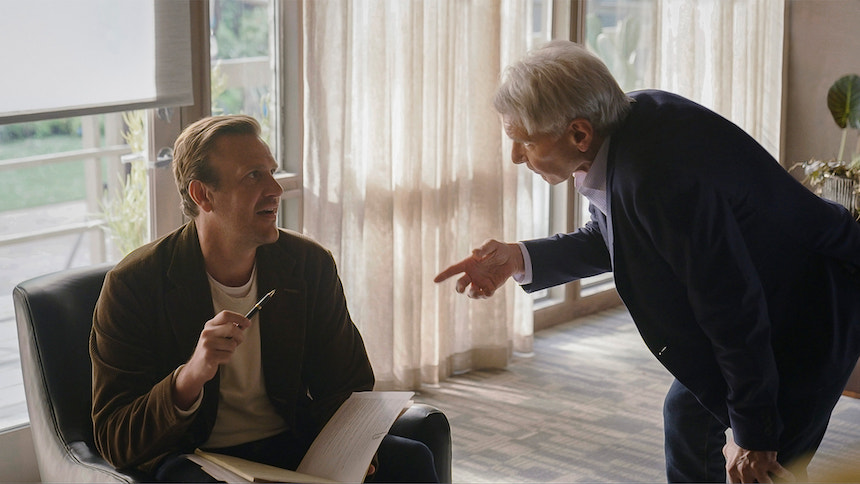 Grieving the tragic loss of his wife, a therapist (Jason Segel) snaps one day and bluntly tells a patient that she should divorce her abusive husband.

Immediately regretful over what he has done, he is shocked to learn that, wonder of wonders, she took his advice, left the nasty fellow, and is happy about it. Weighing the possible consequences, the therapist is similarly blunt with his next patient, the sullen Sean (Luke Tennie), a Black military veteran convicted of a violent act who has been ordered to receive mental-care attention and is possibly homeless for the moment.

Wonder of wonders: he initially rejects the advice before springing into action when the therapist is attacked by the first patient's abusive husband, and then accepts the therapist's offer of temporary accommodation in the therapist's pool house, where he can freely interact with the therapist's teenage daughter, Alice (Lukita Maxwell), who is also grieving her mother's death and remains resentful about being ignored by her father.

Add to the mix two other therapists who share office space with our hero: Gaby (Jessica Williams), the best friend of his late wife, and Jack (Harrison Ford), the grouchy yet wise father/grandfather figure to everybody. There's also the therapist's next door neighbors, the uber-friendly Liz (Christa Miller) and her milquetoast husband, as well as genial gay friend Brian (Michael Urie), who, of course, has relationship issues of his own.

Welcome to a busy, very, very funny world inhabited by an elevated sit-com, where materially comfortable people live enviable lives that are still beset by relatable emotional problems, yet can glory in using the full range of profanities -- emphasis on overusing the f-word -- and sexually explicit language for comic effect, owing to its presence on a streaming service. Created by Bill Lawrence, Jason Segel, and Brett Goldstein, all comedy veterans, Shrinking feels familiar in its form and content, mixing a little drama into its often raunchy comedy, and tempering the hijinks with grief and messy family dynamics.

Let's be honest, I could just have written: "Harrison Ford in a sitcom" and that would have been enough for many, if not most, people, including myself. We've seen so many movie stars appear in so many television shows that the presence of Harrison Ford as a grouchy supporting character is not as novel as it might have been years ago -- say the 90s -- but Ford is fully up to the task.

Career-wise, it fits perfectly into the latest arc of his career, which, just last month, saw debut as a grouchy ranch owner in the latest series from the prolific Taylor Sheridan, 1923, and will see the return of another of his iconic characters in Indiana Jones and the Dial of Destiny, due to hit movie theaters next summer. And the man is 80 years of age!

Beyond that (relative) novelty, the talents of experienced sitcom producer Bill Lawrence (Ted Lasso), together with the writing talents of Jason Segel and Brett Goldstein, ensure that the series is filled with smart and clever dialogue, crispy delivered by an all-star cast of professionals, including a relative newcomer like Lakita Maxwell, who gives as good as she gets in her scenes with Segel, Ford, and the rest, as the therapist's daughter.

Introducing an inviting place to visit on a weekly basis, Shrinking packs a very welcome comic punch, with depth and grace. And a very grouchy Harrison Ford.