Criterion returns to the Ingmar Bergman well, albeit indirectly. 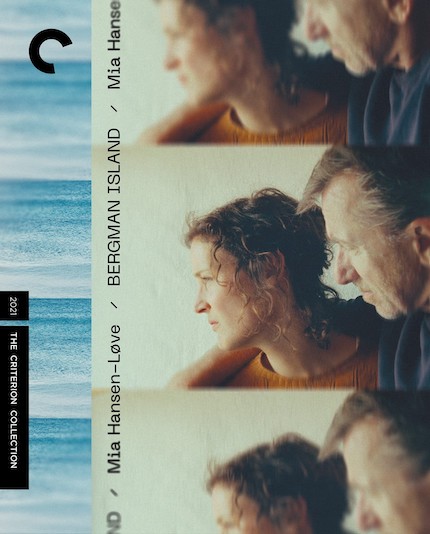 You don't have to be a Bergman zealot to love Mia Hansen-Løve's 2021 film, Bergman Island, though I suppose it would help; it might also hinder in equal measure.

As besotted as the film is with Bergman minutiae -- the only feature where a "Bergman Safari" is a plausible-seeming couples' activity -- the late director's home island, and the weird tourist environment that has grown up around his work, is only set and setting. Hansen-Løve has more on her mind than Bergman or his movies or even his movies' relationship to her movies, if there is one.

The truer question at the heart of Bergman Island would be more like "where does it come from and why," with "it" being any of our creative impulses, muses, imaginings, or ghosts. "Become more trusting of that which guides your process" is something a teacher of mine said a couple of years ago that now rings like a mantra inside every minute spent writing. Bergman Island is, at least in part, about its heroine -- Chris, played by Vicki Krieps -- wrestling with that trust.

But it's also about different kinds of emotional wrestling. Chris is on Fårö Island for a residency with her partner, Tony (Tim Roth). Both are writer-directors. Anyone in the audience who has ever attempted a romantic relationship between two creatives will see some of the rawness, the genuine intimacy shot through with intransigent guardedness, that inflects Tony and Chris' amiable couplehood. They love each other; they have a daughter together (not present; back home, off the island, wherever home is); they are at right angles to one another, in trivial ways and, when it comes to their writing, in not-so-trivial ways.

There is, for want of a better way to put it, a masculinity and a femininity at work that both creates and frays their dynamic. Tony is known, at least in part, for creating films with strong women characters; but Chris glimpses at his notes and sees a distance, a removal of personhood ("woman as salvation"), a masculine focus... and a lot of dirty doodles.

Chris wonders aloud whether Bergman could have had the career he had, and been a better father. She prefers what she calls "coherence," and doesn't like it when artists she admires didn't "behave well" in real life. Tony is more linear: the work is the work. Who cares where it comes from, as long as it comes.

All of this binds up the first half of the film. At its midpoint, Bergman Island thunderously switches its narrative strategies, as Chris begins to tell Tony the outline of a screenplay she has been working on but cannot locate an ending for. Now, with Chris' narration, we join Amy (Mia Wasikowska), Chris' imagined heroine and in-story surrogate, working through the final collapse of her compulsive love affair with Joseph (Anders Danielsen Lie).

In the film-within-a-film, Amy and Joseph are also visiting Fårö Island, for a wedding. They fell in love as teenagers, and broke up, and got back together, and broke up. Chris calls it the last chapter of a longer tale; perhaps it was a chapter that Hansen-Løve, too, could not find the outer edges of, but in its placement here, she doesn't have to.

Chris narrates those edges for her, and tells the story of the last breaking of the love affair of Amy and Joseph, which seems to relate to Chris' partnership with Tony, and to monogamy and fidelity, and Bergman's many affairs. The whole mess of loving at all, in a life that has a beginning, a middle, and an end, none of which necessarily line up, movie-like, with our own desires and dreams.

Bergman Island is charming, peaceable, and deceptively penetrating in its first hour, and then becomes outright spellbinding in its second. Wasikowska's segment not only succeeds deftly on its own terms -- a climactic scene with ABBA's "The Winner Takes It All" blaring, taken with Thor: Love & Thunder's "Our Last Summer" montage a few months later, proves that late-career ABBA absolutely tears up the heartstrings across any semblance of youthful love giving way to heartbroken adulthood -- but the Amy/Joseph vignette fills out Chris and Tony's story without ever needing to describe how the two relate. (Notably, and quite hilariously, Tony is off taking a phone call while Chris narrates the story-within-a-story's exquisite love scene.)

In her jacket essay, film critic Devika Girish notes that movies can supply an ending, which life never can, save for the one we can't control. She considers how Hansen-Løve's autofiction -- her films frequently criss-cross the tracks of the director's real life, and Hansen-Løve's long relationship with older director Olivier Assayas, along with her actual residency at the Bergman Institute on Fårö Island, can be seen as the foundations for this narrative -- allows the director to both express how life is, and to help herself survive how life is.

The cumulative sense that Bergman Island brings is one in which the modal boundary between artist and art is forever moving, shifting, circling around and back, a dance as sublime and sad as a heartbroken girl dancing in a bar.

To further that sense of vertigo, the disc provides two principal supplements: an interview with Hansen-Løve, where she outlines in detail her artistic journey, both generally and with regard to Bergman Island, and the myriad ways the film reflects, refracts, and augments her own relationship with what she calls "inspiration"; and an interview with Krieps, who plays Hansen-Løve's avatar in the film, and tells many of the same stories from one generation further down their narrative line.

Krieps was not the original choice to play Chris in the film; the role was written for Greta Gerwig, who had to back out very close to the start of production to go direct a film of her own. Krieps stepped in but the production was required to go on a further hunt for a new Tony, necessitating a bifurcated shoot on two successive summers. This, too -- Krieps, Wasikowska and Danielsen Lie shooting their portions in 2018, and then Krieps and Roth completing the picture in 2019 -- seems to play into the endless doublings that form Bergman Island's conversation between the couple, their art, and the art that came before.

The film will be available January 31, 2023, from The Criterion Collection on Blu-ray and DVD. 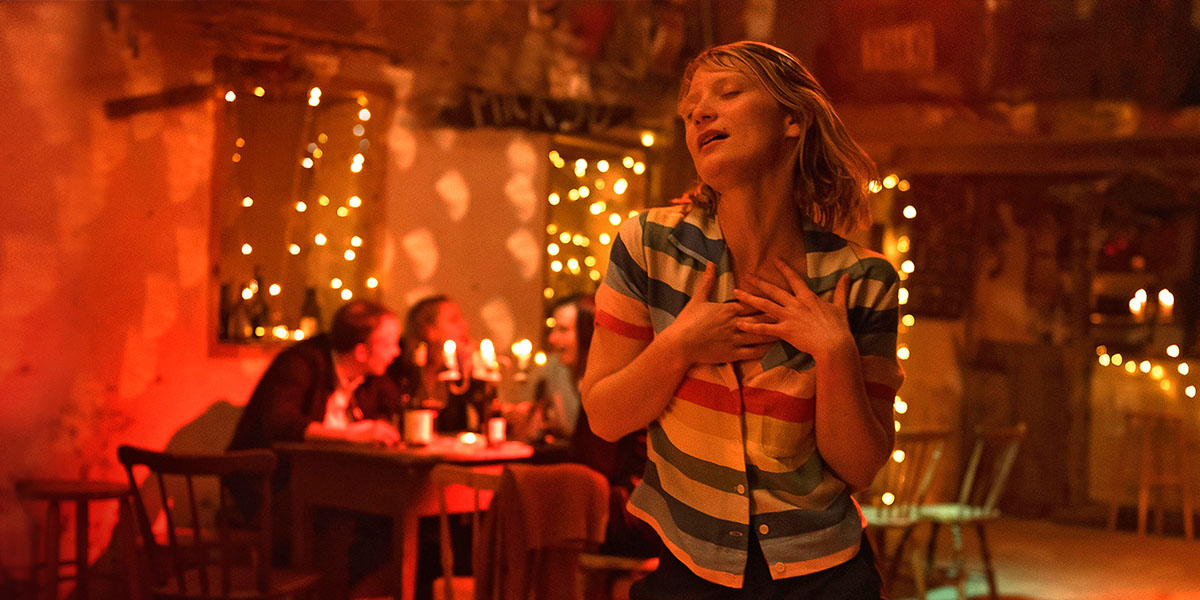