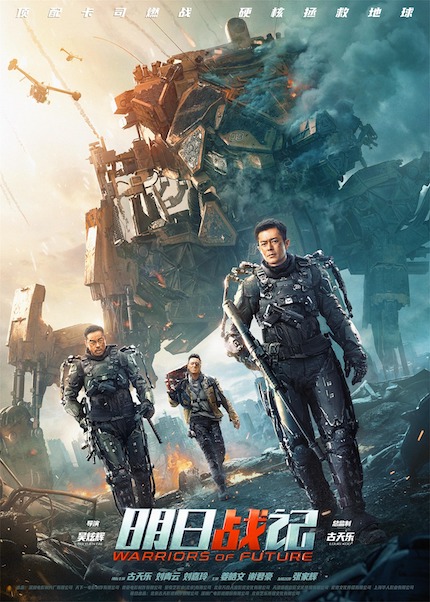 Louis Koo waged a long battle to bring Warriors of Future to the screen.

Funded and produced by Koo's production company, One Cool Film Production, the film met with popular success upon its Hong Kong theatrical release this past August, and now has released on Netflix to allow the rest of us to feast our eyes upon an ambitious spectacle that deserves respect for its intention. Its execution is an entirely different matter.

Directed by visual-effects veteran Ng Yuen-fai, Warriors of Future posits that a meteorite struck Earth and deposited a giant alien creature that resembles a plant out of your worst nightmares. Its existence threatens the future of humanity, yet it is theorized that the giant plant can purify the air and thus clean up the climate that has been devastated by endless wars and ceaseless pollution (not necessarily in that order).

All that needs to be done is to drop a "gene bullet" into its pistil, which will allow it to transform from harmful to beneficial in a short period of time. All that's needed to deliver the "gene bullet" is nerves of steel and a willingness to risk death on behalf of humanity.

Always prepared to accept a suicide mission, military man Tyler (Louis Koo) volunteers so he can get back to his health-imperiled young daughter. His commanding officer, Johnson (Sean Lau Ching-Wan Lan), backs him up completely. If the mission fails, then Johnson's commanding officer, Tam (Carina Lau) will execute the orders that she has been given by her commanding officer, a shady sort of fellow who doesn't like to talk much.

The command structure in place reminds that this is not the typical shoot-from-the-hip style of action tropes popularized by Hollywood action pictures. When Tyler becomes the only survivor after his squadron is squashed by the giant plant, he continues on the mission, but Johnson swiftly volunteers to leave his comfy headquarters office and return to the field to assist. To assist him, he calls upon an old comrade who formerly served under both Tyler and Johnson: Skunk (Philip Keung).

Hong Kong movie fans know, of course, that any character named Skunk will bring smelly trouble, yes, but also unexpected heroics to his supporting arc, and this Skunk is no exception. The entire enterprise reminds of a big-budgeted community theater production that is set in the future and features big stars.

That's not to say that Warriors of Future is some kind of empty vanity exercise on the part of Louis Koo. By centering the picture on important issues, he makes a bid to be taken seriously. It looks like hundreds of people worked on the visual effects, which might not rise to the level of high-dollar Hollywood, yet certainly resemble cut-scenes in a slick modern video game, which is a valid aesthetic that cannot be entirely dismissed.

Science fiction is a genre that has been rarely brought to life in Hong Kong, perhaps due to a lack of general interest locally. It could be that the outsized box office returns enjoyed by The Wandering Earth (2019), a huge hit in Mainland China, whipped up a desire to see what Hong Kong could do with a basic premise, executed on a decent-sized budget (modest by Hollywood production standards, but high in Hong Kong), and featuring big, established stars.

Indeed, it is those stars who carry much of the film's dramatic weight. Louis Koo himself has always been a rather cool character, and he wisely plays to his strengths as Tyler, a man of action who manifests tender feelings toward his daughter.

Lau Ching-Wan is a personal favorite of mine from his Milkyway Image films back in the 90s; he always brings a grounded authenticity to his roles, a confidence that bespeaks a heroic personality who doesn't need to call attention to his most admirable qualities. Carina Lau easily commands authority by her crisply-delivered speech and stern body language, while also suggesting a reasonable side exists, available upon reasonable appeal.

The stars keep the action flowing, and first-time director Ng Yuen-fai does his level best to maintain a kinetic atmosphere for his stars, and the relatively fresh premise -- no superheroes in sight! -- remains palatable on small screens everywhere for the duration of its running time.

Do you feel this content is inappropriate or infringes upon your rights? Click here to report it, or see our DMCA policy.
Carina LauHong KongLau Ching-WanLouis KooSean Lau