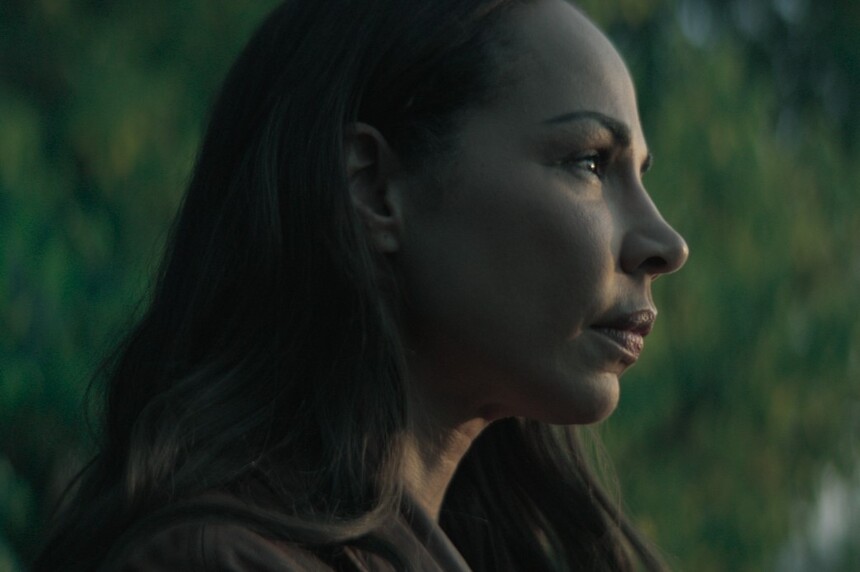 We often talk of, of hear about, the burdens that couples must bear as part of a long term relationship; the give and take of needs and wants, and how, if a marriage is in crisis, it can feel like the whole world is collapsing. Or perhaps, that the world does not matter, since your world is this other person, and once they are gone, the world might as well be too.

Ashgrove, the latest feature from Canadian director Jeremy LaLonde, follows a couple, and the world, on the brink of collapse. A drama with some speculative fiction around the edges, it's rather an intimate story, studying the small moments that belie the heavy weight they carry of meaning and importance, of how patterns can never replicate exact emotions, and how each moment is unique and defies all attempt at logic and containment.

The water is poison: everywhere in the world, something has gone wrong, and without intervention, the human race will slowly poison itself with no other options. Jennifer (Amanda Brugel, The Handmaid's Tale, Kim's Convenience) is a scientist charged with finding the impossible solution. But she's burned out, and her boss orders her to take a few days (days she thinks can't be spared) and go to her country house with her husband Jason (Jonas Chernick). Jennifer and Jason seem to have to make an effort to be happy and enjoy each other's company; one moment might seem light and carefree, the next something happens and Jennifer knows that the moment is not right. Even when friends visit, there is an oddity to their behaviour, and Jennifer can't quite shake the feeling that she's part of a game.

Linear time is such a strange concept; and I'm sure many people who are aging as I am, find themselves stuck in moments, or forgetting things and then going over what we were doing to try and remember. But it's never exactly the same, is it? Once a moment has passed, it's gone, and no amount of recreation can bring it back exactly as it was. As Jennifer feels almost like she's going through a weekend of déjà vu, she questions all the moments that are making up her day: why she doesn't remember that Jason learned to play the ukelele, or why he gets so angry when she wants to make a salad.

What has she missed in her marriage, being so attached to her job, especially when she is tasked with saving the human race? What has Jason missed, perhaps having retreated into himself in Jennifer's absence? The screenplay, co-written by LaLonde, Brugel, and Chernick, allows room for the actors to find that intimacy, that carefulness, that slow cracking that you only notice when it's about to break, in a relationship. Couple that with the weight of death on the horizon, even if it's in a few years, but that death is everyone, and you might be the only person who can stop it, and perhaps these cracks are trivial. The script the trio have crafted, in addition to Brugel's and Chernick's strong performances, give the story a great naturalism.

This is the push and pull of the mundance and the profound. What would be lost if we were all gone - art and culture, of course, but the human connection, the things that make life worth living, our friendships and loves. What are we without our memories, and who holds our memories for us if we are lost? How much can we ask of the ones we love, either to give or to sacrifice? Brugel especially gives such a depth to Jennifer's struggle between what she wants to do and what she must, while Chernick helps us understand the mistakes we can make if we're the one left behind.

Ashgrove is the kind of intimate speculative story that too often falls under the radar, asking as many questions as it answers, understanding that it is the human story that we're all striving to connect to. Its understated tone and naturalistic performances let us inside the burden of keeping a home together and the world alive.

Do you feel this content is inappropriate or infringes upon your rights? Click here to report it, or see our DMCA policy.
Jeremy LaLondeAmanda BrugelJonas ChernickSpencer GieseShawn DoyleDrama