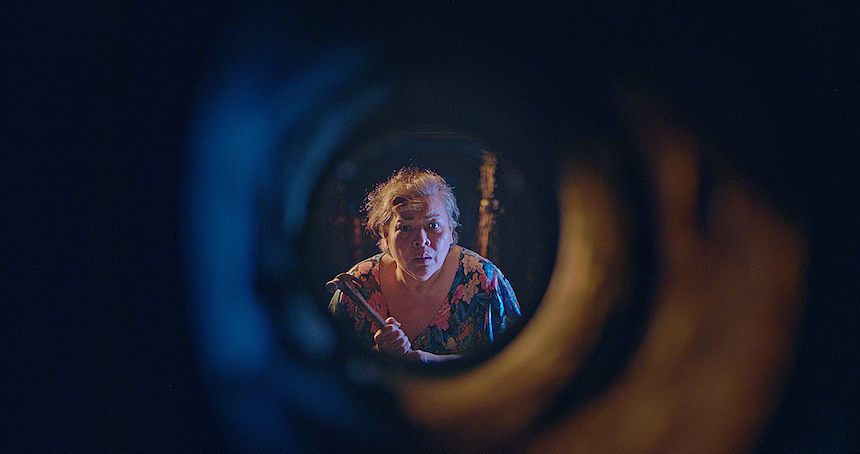 It's a very fine line to walk when your film is metatextual; movies about the making of a movie, particularly the movie that's being made, means understanding the language of cinema deeply enough to make the references without killing the mood, and trusting your audience to follow the path without getting bored or anger.

Luckily, Leonor Will Never Die is a delightful film, a tribute to classic 80s Southeast Asian action films, and a portrait of an artist in late-life crisis. Director and writer Martika Ramirez Escobar, making her feature debut, crafts an engaging story, with plenty of cinephile inside jokes that invite the viewer, as both we and the titular character are quite literally brought into the creative process.

Leonor (Sheila Francisco) was once a renowned Filipino filmmaker. But now, in her later years, she's forgetting to pay her bills, haunted by the memory of her dead son Ron (Anthony Falcon), and constantly bothered by her living son Rudy (Bong Cabrera). Rudy wants to leave the Philippines, but fears leaving his mother, who does seem to take care of him, even as he works for his father (and her ex-husband, a former movie star), who is running for political office.

Leonor discovers a call for movie scripts in the local paper, and digs up an old one, determined to rewrite it and get it produced. As she writes, she envisions the changes, and it's not long before she finds herself in her own movie.

Leonor knows she is perhaps not as sharp as she once was; but the tragedy of her son's death has weighed heavily on her. Still, she is determined to get the money she neds to survive.

Writing on her porch, she tries to craft a story about Ronwaldo (Rocky Salumbides) (and yes, names after her dead son): he's a simple working man, who falls in love with a showgirl, whose ex-boyfriend was of course a local crime lord (and named after Leonor's ex-husband). She smokes, she paces, she tries to figure out the right words and actions that will bring the story to life -- and as she's pacing, an argument from next door sees a television fly out the window and land on Leonor, knocking her into a coma.

Awaking (in the coma), Leonor finds herself in her own script. And it's now her job (again) to guide her characters throught the scenes. Ronwaldo is as she remembers her dead son: full of heart and bravery; the bad guys are just what we expect from an 80s action film, and Leonor is ... well, she's herself, a feisty old lady with a knack for changing the course of events. But she can't just sit in her proverbial director's chair; this time, she has to get into the action herself, in her flowery moomoo and flipflops.

Leonor might have taken a nasty bump to the head, but her senses come alive in a way they haven't for years, when she's on this proverbial film set. She finally understands how she perhaps idolized her dead son a little too much, she puts herself literally in the place of her actors as they navigate her furious tale of star-crossed love and speeding bullets.

Francisco is endlessly charming as she turns Leonor into an action heroine, not just in deeds but in words as well. She finds her love for cinema again, as well as her love for Rudy, and faith in herself.

With an aspect ratio and colour grading that conform to the films of the time, themselves lovingly ripped off from Chuck Norris-style American films, Ramirez Escobar finds the humour in the somewhat cheesy action, but cheesy in the best way possible. There's more than a few stabs at the government of the era (an action star was, indeed, elected to the presidency and left in disgrace), and getting the musical number just right. It seems odd, but it works, and at the centre is the heroine we both want and need, a reflection on anyone who has found life a bit too taxing and needs rejuvination in what once make them happy.

Leonor Will Never Die packs in fun action, a romance, a drama of the joys and perils of filmmaking, and a love story between mother and son, and a woman and herself.

Do you feel this content is inappropriate or infringes upon your rights? Click here to report it, or see our DMCA policy.
Martika Ramirez EscobarMusic Box FilmsSheila FranciscoThe Philippines

More about Leonor Will Never Die