Review: GIRL AT THE WINDOW, A Down Under REAR WINDOW 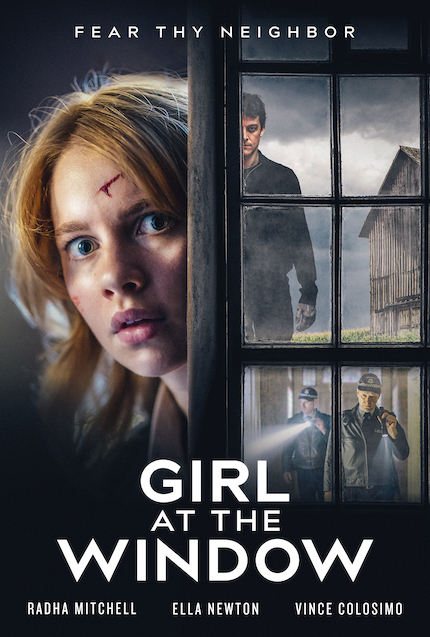 A Down Under Rear Window clone by way of '80s slashers and Ozploitation chillers of the late 20th century, Girl at the Window promises far more than it eventually delivers.

It begins with a positively nightmare-fueling scene involving a supremely self-centered teen, a coin-operated photo booth, and the sudden appearance of a naked, one-eyed corpse propped up behind her. It's neither dream nor nightmare, but the result of the almost mystical machinations of a random serial killer the local media has tritely dubbed "The Clockwork Killer,” presumably because he follows a pattern that involves targeting couples, kidnapping, and murder, all within a three-day span.

Then again, the identity of the serial killer, once revealed in the late stages of Girl at the Window's mercifully brief 84-minute running time (including credits), turns out to be just as bland and uninventive as the title he rejects for himself. Rather than go into a long-winded explanation of his motives, background, or interests, the typically talkative killer dispenses with any and all explanations for his (or her) murder spree, shrugging his (or her) shoulders and just admitting that "bad people do bad things,” before going in for another kill. It’s almost worthy of applause. The killer knows exactly what kind of film he’s in and expects the audience to know too.

Still, that kind of effort — or rather, lack thereof — extends to everything that precedes and/or follows the killer’s big reveal in Girl at the Window. Taking its inspirations (if “inspiration” really is the right word here) from Alfred Hitchcock’s Rear Window and its countless imitators over the last half century, Girl at the Window centers on Amy Poynton (Ella Newton), a deeply unhappy teen (the big T, “Trauma,” plays on her unhappiness), new to a small, out-of-the-way town in Victoria, Australia. As a minor, she doesn’t have a say in where or how she lives, causing inevitable friction with her newly widowed mother, Barbara (Radha Mitchell, Silent Hill, Pitch Black), and the working-class neighbor, Chris Mancini (Vince Colosimo), who’s taken a shine to Barbara.

Unsurprisingly for a low-effort flick like Girl at the Window, Amy becomes immediately suspicious of Chris, and not just because he’s dating her mother and potentially replacing Amy’s late, beloved father. Between perpetually tearing down and rebuilding his house next door, keeping an oversized shed in Amy’s direct line of sight locked, and taking unscheduled trips in his van at night, Chris becomes Suspect No. 1 in Amy’s frazzled, unstable mind. Chris also has a habit of popping up uninvited in Barbara and Amy’s house (locked doors aren’t a thing Down Under, apparently), adding to the thick layer of suspicion hanging over Chris’ head.

Chris as the actual serial killer would be too easy, unless, of course, that’s part of the plan by director Mark Hartley (Electric Boogaloo: The Wild, Untold Story of Cannon Films, Patrick: Evil Awakens, Not Quite Hollywood: The Wild, Untold Story of Ozploitation!). Working from a tonally erratic screenplay credited to Terence Hammond and Nicolette Minster, Hartley jumps headfirst into the more lurid, seamier aspects of the story, from the one-eyed, naked corpse we see in the first scene, to a subsequent scene involving the killer’s attack on a male-female couple as they attempt to enjoy a tryst in their car. Having no use for men, the killer quickly disposes of the male half of the couple, kidnaps the female half, and brings her to the kind of expansive underground lair that would make most fictional serial killers seethe with envy.

Shockingly, Hartley indulges his Ozploitation bona fides, though, far less than expected given the genre tropes at play here. He only goes full Ozploitation one more time after the initial, table-setting kidnapping scene, suggesting either a lack of nerve, imagination, or more likely than not, limited resources, instead focusing on Amy as she’s repeatedly disbelieved by her clueless mother, well-meaning, if ineffectual, law enforcement officers, and her relentlessly shallow, self-centered, reckless best friend, Lian Chen (Karis Oka).

While the cast basically holds their own in scenes ranging from the ludicrous to the under-motivated, it’s far from easy work to convince audiences to come along for the ride. Newton acquits herself relatively well in the lead role, though scattered flashbacks, half-dreams, and hallucinations bordering on the psychic require her to deliver the exact same response far too many times.

As Amy’s concerned, over-protective mother, Mitchell does her level best to ground her under-written role with something approaching emotional authenticity, but it’s easy to imagine a far more engaging third act involving Amy and Barbara facing off against the serial killer. Instead, she’s left to feign concern in Amy's seemingly disjointed ramblings for a few, scattered minutes at a time.

(Full disclosure: Site founder and editor Todd Brown works with XYZ Films, which is distributing the film. Mr. Brown was not involed in the writing or editing of this review.)

Girl at the Window 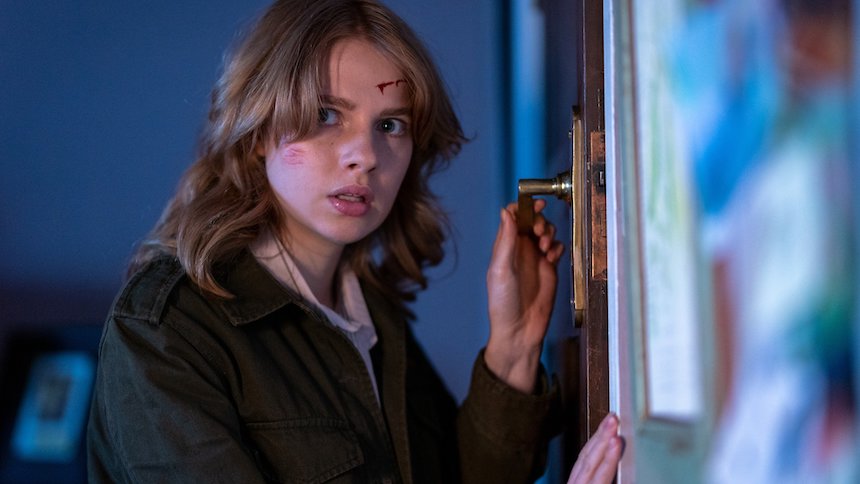