Sitges 2022 Review: THE MIDNIGHT CLUB, Holding On to Horror in the Final Hours

As one of the characters points out in the first epsiode, what's scarier than finding out you have a terminal illness? Perhaps once you know you're going to die - the ultimate unknown, which is what drives much of fear - nothing else can terrify you just as much. Still, in Mike Flanagan's new television series The Midnight Club, a group of these patients do just that: try to scare each other, every night. Maybe it's just a necessary distraction, but as always, there's a greater mystery to be solved, about death and the beyond.

Illonka (Iman Benson) is all set for her future: at the top of her class, she's on her way to her dream school, Stanford. Until she gets a diagnosis of thyroid cancer, and the treatments don't work. Devastated and still determined to survive, she finds Brightcliffe, a hospice for terminally ill teenagers such as herself, and convinces her foster dad to let her go. There, she meets several other kids in the same predicament, and stumbles upon The Midnight Club, a group they have formed, meeting late at night, and each trying to tell a scarier story. But Illonka knows there is more to Brightcliffe, which use to house a cult and other interest groups in its long history.

Based on the young adult novel by Christopher Pike, it is aimed at a teenage crowd, but there's plenty for those older to garner from the show. The heartbreak of knowing these young kids with formerly bright futures will die likely within months; a mysterious house with terrors that sneak out at night; but mostly, for horror fans, kids learning how to tell scary stories. As they sit at a grand table by an appropriately grand fire, they figure out what each of their compatriots fears the most - both by how they react, and what story each one tells. Their fears are not just about dying, but also what they might be leaving behind, both the good and the bad, and what part of themselves might be permeating the building (they have a pact that whomever dies first has to try and reach those still living with proof of life after death, a pact perhaps kept by others in the prior decades). 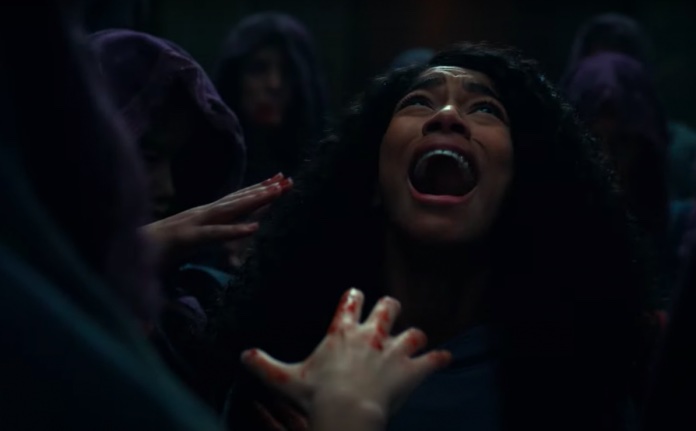 This is a story of three parts. First, Illonka and her friends as they deal with their approaching deaths: Illonka is still looking for her miracle, and doing her homework to find it; some shelter in their (understandable) anger, others in their religious faith; a few just seem to have accepted it and remain quiet about their short futures. But they protect and help each as they spend these last months together. The second part is whatever mysteries this building holds, somethign Illonka thinks might be a key to that miracle cure, even as a shadow seems to stalk each of them in turn.

The third is the stories, and really this is where the show takes off. With the first one, we see how they're starting to understand how horror works, finding what's going to scare each other, and the audience, the most. As one character points out to another, startling your audience is not the same as scaring them (something the show itself is more than a little guilty of in certain scenes, leaving you feeling a little hollow); but at least one story in the second episode is frightening in the most heart-breaking way, as Anya (Ruth Codd), almost constantly brimming with anger and pain, tells her tale of the Two Danas - which may or may not be autobiographical. This is the kind of fear we can appreciate from these kids, the kind that sinks into your bones and makes a home there.

It's that kind of fear that I hope will drive the rest of The Midnight Club; it might be aimed at a young adult audience, but there is still something deeply terrifying in knowing what these kids are facing, and how they choose to examine their fear in this perhaps unconventional way. The cast is strong, and the the stories they tell feel like those we all could make up in front of the roaring fire that threatens to devore us all.

Do you feel this content is inappropriate or infringes upon your rights? Click here to report it, or see our DMCA policy.
Sitges Film FestivalMike FlanaganLeah FongSamantha SloyanZach GilfordIgby RigneyDramaHorrorMystery