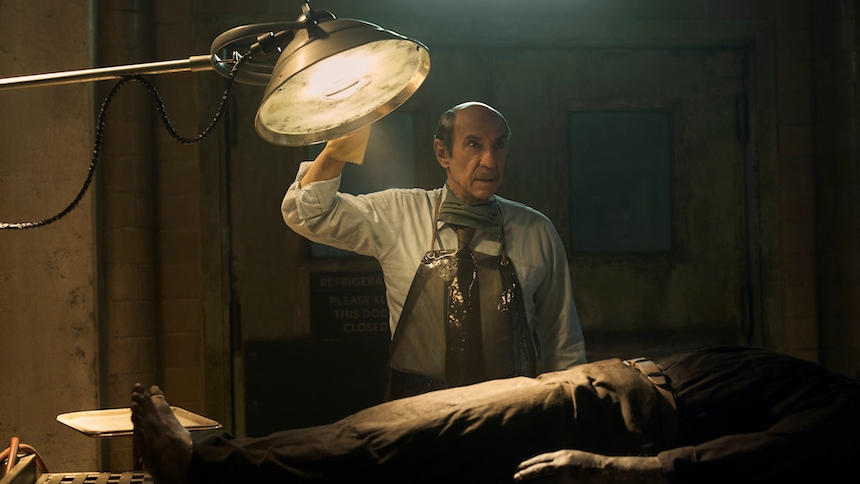 Despite winning a Best Director Oscar five years ago for The Shape of Water — what many filmmakers would consider the culmination of their artistic careers — Guillermo del Toro (Pan's Labyrinth, The Devil's Backbone, Cronos) shows little, if any, sign of slowing down, bringing one of his most cherished personal projects, a new adaptation of William Lindsay Gresham's classic 1946 noir, Nightmare Alley, to screens just last year and returning this fall/winter with not one, but two separate projects,  the soon-to-be-released Guillermo del Toro's Pinocchio, a stop-motion animated adaptation of Carlo Collodi's perennial favorite, and out now, Guillermo del Toro's Cabinet of Curiosities, both for Netflix.

The results — with maybe one or two exceptions — are qualitatively among the best the genre has to offer, mixing and remixing periods, tones, and tropes into eight, standalone segments even the most casual horror fan will appreciate, if not outright love. To call them segments or shorts might be something of a misstatement, however, as del Toro, working with a generous production budget courtesy of Netflix and its subscriber base (i.e., us), produces each "episode" as a standalone, borderline feature-length entry, with only one segment under 50 minutes.

Even that sub-hour segment, Vincenzo Natali’s (Splice, Cube) “The Graveyard Rats,” packs an overabundance of skin-crawling, shiver-inducing claustrophobic terrors into its intensely brief running time. Set in turn-of-the-20th-century Massachusetts, the central character, Masson (David Hewlett), a penniless, debt-ridden caretaker-turned-grave-robber, discovers that hundreds of prayers to the invisible god above offer no defense against the hordes of voracious rodents infesting a local cemetery.

Clinging to faint hopes of saving himself from a fate worse than, if not equal to, death, Nick places the last shreds of hope on an antique seance table and later, the contents he finds in said seance table. An unbeliever by nature and sporting a victimhood mentality the size of Texas, Nick stumbles along, ignoring every sign, symbol, and portent that suggests the table and its contents will only lead to his doom.

As often with horror-themed anthologies, mixing desperate, immoral or amoral characters, their attempts to leverage a temporary advantage into financial or personal gain, and an ending that usually involves disaster or something close to disaster. They’re one and both cautionary or morality tales, often of the grimmest kind.

That cautionary theme runs through several other segments, including Catherine Hardwicke’s (Twilight) near-perfect adaptation of H.P. Lovecraft’s “Dreams in a Witch House,” starring an effective Rupert Grint as a Depression-era spiritualist maniacally obsessed with piercing the veil between the natural and supernatural worlds so he can reunite himself with his late, beloved twin sister. Filled with bizarre, arresting imagery, folktale shocks and scares, and the kind of borderline nihilistic ending Lovecraft himself favored, “Dreams in a Witch House” might just be the most memorable, if not the most moving, episode found in the first season.

Not to be outdone, David Prior’s (The Empty Man) “The Autopsy,” adapted by David S. Goyer from Michael Shea's short story, delivers one of the most gnarly, gruesome sequences in the entire series as Oscar winer F. Murray Abrahams’s (Amadeus) traveling coroner, Carl Winters, working all night to examine the bodies of miners who died in an explosion, encounters something so otherworldly that his entire conception of himself, of humankind, and our place in the cosmos comes under strict scrutiny. Essentially a one-man tour-de-force for the oft-underused Abrahams, “The Autopsy,” unlike most of the segments, ends on a moment, if not of uplift, then of hope and optimism, a surprise given the grisly proceedings of the previous hour.

As always, an all-too-human trait, hubris plays a key role within and across multiple segments. Often combined with willful blindness or ignorance, hubris leads to catastrophe in the aforementioned “Lot 36” and“The Graveyard Rats,” Lily Ana Amirpour’s (The Bad Batch, A Girl Walks Home Alone at Night) “The Outside,” a wicked, if over-obvious, satire of the beauty industry, Keith Thomas’s (The Vigil) “Pickman’s Model,” another H.P. Lovecraft tale wherein madness, among other Cthulhu-inspired terrors, await an early 20th-century artist after he pursues an unlikely friendship with an awkward outsider artist played by Crispin Glover.

In “The Viewing,” Panos Cosmatos’s (Mandy, Beyond the Black Rainbow) neon-drenched, Lovecraft-inspired entry set in 1979, a secretive multi-millionaire played by Peter Weller (Star Trek Into Darkness, RoboCop), Lassiter, invites a super select group of artists and experts over to his Brutalist-styled mansion to ruminate on art, beauty, and money with the help of various legal and non-legal substances, all while a unique item, safely tucked away behind a wall in a side room, offers the select few a once-in-a-lifetime experience, assuming they can survive the night, that is.

Expanded from M.R. James-inspired story penned by del Toro, the last segment, Jennifer Kent’s (The Nightingale, The Babadook) “The Murmuring,” unfolds like a not unfamiliar supernatural horror story. All of the elements viewers have long come to expect from ghost stories are there, from the old dark house, literally and figuratively cut off from civilization, to the troubled spirits who repeatedly disturb the house's temporary residents, Nancy Bradley (Essie Davis), an ornithologist researching the synchronized flight patterns of the dunlin bird species, her inflexibly rational husband and research partner, Edgar (Andrew Lincoln), and the unresolved, year-old trauma that threatens to fracture their rapidly disintegrating marriage.

Elevated by Davis and Lincoln’s authentic, grounded performances and Kent’s restrained, unobtrusive direction, “The Murmuring,” intentionally or not, offers a welcome respite from its predecessors and their often downbeat endings.

Guillermo del Toro's Cabinet of Curiosities will be released on Netflix two episodes at a time between October 25 and October 28.