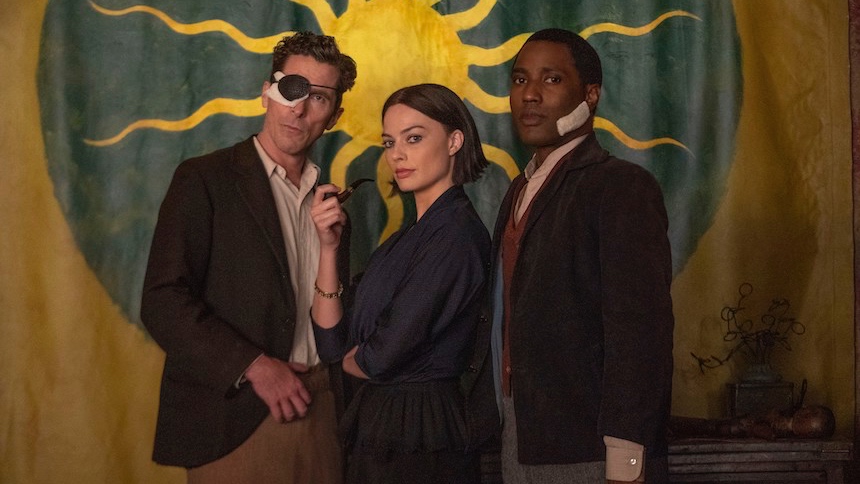 Amsterdam opens promisingly enough in a meticulously recreated New York circa 1933, initially focusing on Bale’s character, Burt Berendsen, a WWI veteran/survivor, medical doctor, and estranged husband to Beatrice Vandenheuvel (Riseborough), the social-climbing daughter of a wealthy, elitist family, and Berendsen’s best friend, fellow WWII survivor, and current attorney-at-law, Harold Woodman (John David Washington). Working on the margins of a racialized, class- and caste-bound Manhattan, Berendsen and Woodman still manage to eke out a living, though it’s obvious from the beginning that their individual and collective situations aren’t tenable, short- or long-term.

An opportunity to step into a detective/mystery drama presents itself in the form of Liz Meekins (Taylor Swift), a high-society woman and the daughter of the recently deceased general (Ed Begley, Jr.) who formed a multi-racial Army regiment in France during the First World War. Feeling they owe their former commanding officer and his family a personal debt, Berendsen and Woodman agree to investigate the general’s untimely death. Their search for clues begins with an unauthorized autopsy at the city morgue with the help of one of Woodman’s friends, Irma St. Clair (Zoe Saldaña), a medical assistant. Another Woodman associate, Milton King (Chris Rock), mostly exists as an extra pair of arms, legs, and a never-ending stream of complaints and warnings disguised as jokes about their decision to help Meekins’s daughter that unsurprisingly proves to be correct.

The plodding, pedestrian mystery surrounding the general’s death eventually brings Berendsen and Woodman back into contact with their long-lost best friend, Valerie Voze (Robbie), a onetime ex-pat war nurse who took an avowed interest to the two men after tending to their wounds in a French hospital, emotionally in the case of the still married Berendsen, carnally in the case of the unmarried Woodman. After the close of the war, the three briefly shared an idyllic existence in Amsterdam (it’s more than a state of mind), before parting ways abruptly and, to Berendsen and Woodman’s minds, permanently.

Voze’s industrialist brother, Tom (Malek), his grasping, self-centered wife, Libby (Anya Taylor-Joy), and another WWI general, Gil Dillenbeck (De Niro), well-regarded by the soldiers once under his command and politicians on both sides of the aisle, also play roles of varying importance in an overly convoluted plot loosely based on the little-known “Business Plot of 1933,” a failed fascist conspiracy instigated by American industrialists. They hoped to emulate Italy and Germany and install their own strongman-dictator in the White House through non-electoral means.

Though not particularly well-known, likely because it's rarely discussed or mentioned in any detaiil in high-school history classes, the Business Plot of 1933 did, in fact, occur. Luckily for American democracy and America's involvement in World War II, it failed, but in a highly fictional setting like Amsterdam’s, anything is possible, up to and including the success of the conspiracy itself.

Unfortunately, Amsterdam’s overstuffed plot, flaccid pacing, and over-indulgent running time make it, if not exactly unwatchable, then an all-too-obvious misfire. It didn’t have to be that way, but Russell, badly in need of a co-screenwriter or a strong producer, clearly felt that the script was more than ready to go into production.

Russell probably imagined any holes in the script could have been papered over by an A-level cast, ace production design, and the best collaborators up and down the line money could buy, including three-time Oscar winner Emmanuel Lubezki (The Revenant, Birdman, Gravity) delivering his usually impeccable cinematography. Sadly, Russell was wrong and the limp, negligible result is an unwelcome reminder that even talented filmmakers can and will stumble.