Review: ALL QUIET ON THE WESTERN FRONT, Timely Adaptation of the Anti-War Classic 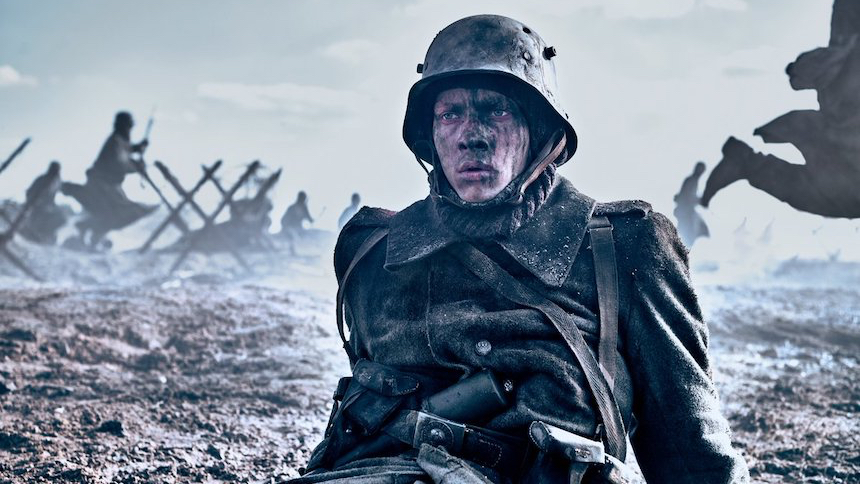 Released to popular and critical acclaim abroud and public dissension at home, All Quiet on the Western Front, Erich Maria Remarque’s groundbreaking, 1929 anti-war novel, broke new ground, taking an audicious, bold, anti-war stance during an era where any criticism of the First World War, Germany's role in the war, or its subsequent defeat, was considered both out-of-bounds, unpatriotic, and thus, anti-German. A thorough critique of patriotism, especially patriotism with a nationalistic bent, was exactly Remarque intention.

Contrary to popular belief, in pre-Hitler Weimar Republic only work that unironically, unquestionably extolled Germany, propaganda by another name would be allowed publicantion, leaving Hollywood to make the first — and until now, definitive — adaptation of Remarque’s work in 1930 under Lewis Milestone’s efficient, economical direction. Once in power, Hitler and his inner circle targeted targeting any book, film, or play that cast Germany, its people, or Germany’s singular role in remaking the world, in a critical or negative light, removing them from access by the general public.

Like the other, decades later Remarque adaptation released as a prestige TV miniseries in 1979 starring Richard Thomas (The Waltons) in the lead role, Milestone’s adaptation couldn’t overcome a singular limitation that undercut war films for most the 20th century: Working within the limitations imposed on studios by social and cultural mores along with pressure from social groups meant that any depiction of violence would be, by necessity, softened at best and completely elided at worst. That made the central theme or message of Remarque’s work, the senseless, wanton waste of the lives of millions of men, most of them young, naive, and driven by a dangerous nationalism masquerading as patriotism, severely blunted in its intended effect to bring the abject horrors of war to audiences on both the big and small screens.

Both adaptations were also made by and for English-language audiences, leaving Remarque’s original German unadapted almost a century after Hitler and his Fourth Reich had turned to dust and a since reunited Germany had re-embraced parliamentary democracy. The latest, German-language adaptation, filmed in Europe with a German cast, by writer-director Edward Berger (Patrick Melrose, The Terror, Deutschland 83), hopes to correct that major oversight, giving Germans and German speakers the most straightforwardly faithful adaptation of Remarque’s profound, searing anti-war novel.

All Quiet on the Western Front centers primarily on Paul Bäumer (Felix Kammerer, delivering a revelatory performance), the kind of prototypical young German patriot who willingly volunteers for the war in its last years, along with several of his like-minded compatriots, Frantz Müller (Moritz Klaus), Albert Kropp (Aaron Hilmer), and Tjaden Stackfleet (Edin Hasanovic), along with Stanislaus “Kat” Katczinsky (Albrecht Schuch, heartbreakingly earnest and empathetic), the wizened, experienced soldier who becomes friend, confidante, and paternal figure to Paul and the other men. Kat helps the men figuratively under his charge survive a war machine that grinds soldiers like Paul and the others under its wheels.

Through Paul’s initially naive innocent, we see the initial burst of enthusiasm for war steadily erode until only the wavering, inconsequential instinct for survival remains. Paul becomes an unwilling witness to the daily depredations and horrors of war, the cries of dying men and the silence that follows shaking him to his essence, remaking him into a realist that has little room in his head or heart for the false patriotism and even more false nationalism. Even as Paul attempts to arrive physically, if not mentally or emotionally, unscathed from the war, German politicians led by Matthias Erzberger (Daniel Brühl), more concerned with face-saving gestures than saving German lives, begin the inevitable negotiations that will lead to an armistice that barely lasts two decades.

While fine in its details and particulars of a German soldier’s life and death during the First World War, adding an exacting verisimilitude that’s an absolute must for an adaptation of Remarque’s work in the 21st century, All Quiet on the Western Front isn’t without some minor, ultimately forgivable issues. That Berger’s adaptation periodically veers into borderline self-defeating reverence for the source novel shouldn’t come as a surprise, especially given burden of being the first German-language production of Remarque’s novel.

Such as they are, the periodic longueurs function both to reveal Berger’s respect for Remarque’s novel and his deeply felt desire to remain faithful to Remarque vision for life in the literal trenches of Western Europe in the closing years of the First World War.

All Quiet on the Western Front