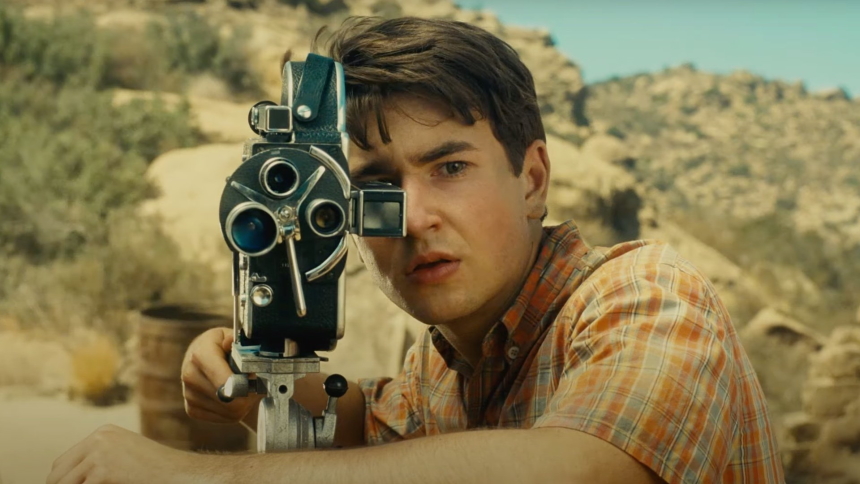 Dreams are scary. In The Fabelmans, Steven Spielberg puts his own childhood up on the big screen, through the Dream Factory, with the help many of his regular collaborators, screenwriter Tony Kushner (Munich, Lincoln), John Williams (Jaws, Indiana Jones, Jurassic Park) and Janusz Kaminski (Schindler’s List, Saving Private Ryan, West Side Story) among others.

His story starts from his parents taking him as a young child, Sam, to the movies to see The Greatest Story Ever Told. It then follows the Spielberg, er, Fabelman clan as they move slowly westward from New Jersey to California via Arizona as Mr. Fabelman’s career as an electrical engineer grows in leaps and bounds along with the nascent computer industry, and Sam makes his way onto the CBS Studio Lot.

Sacrifices are made along the way, including Mrs. Fabelman’s career as a concert pianist. It is a tribute to his mother that John Williams often takes the background here, as Ms. Fabelman playing classical pieces on the family piano does a lot of the heavy lifting (score-wise) of the film. Michelle Williams with her ‘sad eyes’ performance (one she has been perfecting since Wendy And Lucy) sealing the future Oscar nomination. Paul Dano, who, apparently, can adjust his pants with the best of 1950s dads, does not get beat up physically, for once in his career, but bears the brunt of the emotional blows with a soft kind of grace. Gabriel LaBelle slides into the role of Sam in a workmanlike way, the way direction should be showy by not too showy.

The push and pull by Sam’s parents from the scientific, pragmatic, side and the artistic, chase the tornado, side is one angle in which the movie forms the narrative. But the more emotional side of things are the sacrifices, the crushing blows inflicted on family, on friends, when you try to realize your dreams to their fullest, or choose to give up your dreams. There are consequences. Drama.

In a way, this is a Spielberg adventure about work-life balance; bumps, fights, and paralyzing setbacks along the way. This is an odd miracle in itself, albeit it is easy to find this thread in his work, from Richard Dreyfus’ obsession (and eventual familial abandonment) in Close Encounters of the Third Kind, to the shattered Abagnale family dynamic in Catch Me If You Can, or Tom Hanks’ domestic arc in Bridge of Spies.

But The Fabelmans is not a coy film that inserts cute easter eggs or clever references to Spielberg’s later movie career. It really does lean into difficult domestic challenges, of even a privileged childhood with loving parents. The victories of discovering what you want to do with your life, with all the obstacles and expectations and nudges of life. There is a wonderful cameo from Judd Hirsch as Sam’s mother’s Uncle, who abandoned the family to go work for the circus, shoveling shit and sticking he head in the lion’s mouth. He tells teenage Sam that Family and Art will eventually tear anyone in two. The conflict between selfishness and guilt is the throughline of The Fabelmans. It is present in Sam, his sisters, his parents, classmates. It’s probably a middle class thing. But Spielberg’s talent has always been the living saint of the post-war suburban middle class in Cinema.

Given the number of movies from Super 8 to Son of Rambow, that focus on the joy of kids and their friends with a camera, it sure is fun to see Spielberg go ahead and make one of these. Sam makes home movies in his basement, westerns and war pictures with his Boy Scout troop, instant nostalgia from the family camping trips, and eventually propaganda for his highschool graduation. The glee of new gear and new special effects or film editing techniques is all joyfully realized. But with a more considered purpose underpinning things here.

At two and a half hours, there is room for a lot of stuff without even straying from the main story. And this gets at the most interesting part of the filmmaking process: How choices, control of storytelling, and framing of images can weaponized emotions. All of them. The single best idea on display in The Fabelmans is how a filmmaker can reward or punish the viewer. The camera sees things differently than the way we see things in the moment. It does not look away, or get distracted. It is all under a certain kind of control from the Man Behind The Curtain.

Spielberg has been known for years as a sentimental, happy ending kind of filmmaker (ahem Minority Report? A.I.? Seriously?) with a great talent for visceral action set-pieces. Sam often takes out his emotional grievances in different ways with his student and family films, straight to the heart of the audience, often the subject of the film itself. It is a fascinating way to demonstrate the inscrutable, elusive, often nakedly dishonest, power of the motion picture. Here, instead of great power coming with great responsibility, the aphorism is, “Guilt is a wasted emotion.”

And yet, from the playful magic of the final shot of The Fabelmans, even at 75 and with all the power of Hollywood at his fingertips, there is still that child-like eagerness present in Spielberg, for everyone in the audience to share the moment. To bring it home. To simply get it. Dreams can also be fun.

More about The Fabelmans