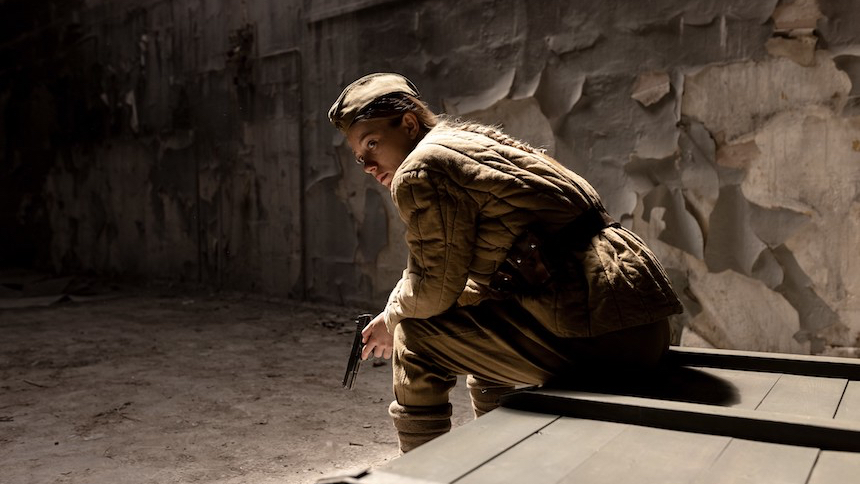 In Ben Parker’s (Girl on the Third Floor, The Chamber) latest film, Burial, the past never remains the past and history, at least for the survivors of the Second World War, haunts them across time and space.

The war may have ended with the death of Adolf Hitler, but the fascist ideology he championed also survives across time and space, in the mythologizing and cult-of-personality formed around Hitler, in the racist hatred and bigotry, the rejection of democracy for authoritarianism, and the use or threat of violence to intimidate and silence. Fascism by any other name or any other face remains fascism, whether embraced by his followers almost 80 years ago or today in Europe and in the United States.

That key lesson serves as the justification for an extended prologue and a brief epilogue, a set of narrative bookends that unfold in 1991 as the Soviet Union collapses under the weight of its fatally flawed ideology, economic recession, and the burdensome costs of empire, ending with a failed, decade-long war in Afghanistan. As a TV announcer excitedly celebrates the supposed triumph of Western-style democracy and a new era of peace and cooperation, an elderly woman watches disinterestedly, seemingly content to bide her time until she leaves this earthly realm.

That woman, “Anna Marshall,” played by Harriet Walker in the scenes set in 1991 and Charlotte Vega (Wrong Turn, Mosquito State, American Assassin) in 1945, isn’t who or what she appears to be. Seemingly frail and somewhat naive or unsuspecting, Anna ventures into the night to recover her only companion, a canine of mixed breeding. As a masked intruder sneaks into her house, something entirely unexpected happens and with a literally captive audience hanging on her every word, Anna, actually Brana Vasilyeva, recounts not the story the intruder desperately wants to hear, a romanticized, idealized, mythologized narrative, but Brana’s own particular truth.

As the story switches to 1945, the audience learns that Brana, along with a squad of mostly faceless, generally disposable grunts drawn from the victorious Soviet Army, must transport a coffin-shaped container from Berlin, Germany, across and into Poland, and into the hands of the Soviet leader, Joseph Stalin.

Driven by a mix of devotion to the war, its aims, and her identity as a Jewish woman cognizant of the virulent anti-semitism of Nazi Germany and the Final Solution that targeted Jews in Germany or elsewhere in Europe, Brana refuses to accept anything except the complete success of the mission. While Brana’s devotion brings her conflict with some of the lesser motivated men, at least three, Tor Oleynik (Barry Ward), Dimitry Makar (Niall Murphy), and Vadim Ilyasov (Dan Renton Skinner), repeatedly follow her lead.

As Brana — and, by extension, the audience — learns, Poland isn’t as hospitable to the Russians as they expected, a result of Poland’s occupation by first the Germans and then the Soviets, each in turn bringing atrocities and war crimes to the Polish people. As Nazi dead-enders (dubbed “werewolves” by the characters themselves) who violently refuse to accept the defeat of Fourth Reich lie in wait, attacking Brana and the men at their most vulnerable, Brana attempts to find allies among the Polish civilians. She thinks she finds one in Lukasz (Tom Felton, the Harry Potter series), a Pole of German extraction bitter at what the Germans have done to his country and his immediate family.

Not surprisingly given the World War II setting, Burial eventually devolves into a series of firefights that pit Brana and a dwindling supply of Russians on one side and predictably brutal, borderline nihilistic Nazi dead-enders on the other. Parker stages those scenes with an admirable emphasis on clear, clean compositions, unobtrusive camerawork, and sharply delineated spatial geometry.

If anything, the firefights are often over far too soon. Working with more imagination and creativity than budget or resources, Parker still manages to make at least one or two firefights relatively memorable, especially when he introduces a hallucinogenic, possibly supernatural element to the action scenes.

It helps, of course, that, give or take a grab bag of English and non-English accents, the actors delivers appreciably grounded performances, beginning with Harriet Walker and Charlotte Vega as the same woman on opposite sides of the same story, and continuing through a uniformly strong supporting cast. As the incredibly resilient Tor, Barry Ward gives a notable performance. Likewise Niall Murphy as Dmitry, a Russian soldier who sets aside any misgivings about the mission’s viability or his personal safety to follow Brana’s lead in the second half of the film.

Burial opens Friday, September 2 in movie theaters and on VOD via IFC Midnight.