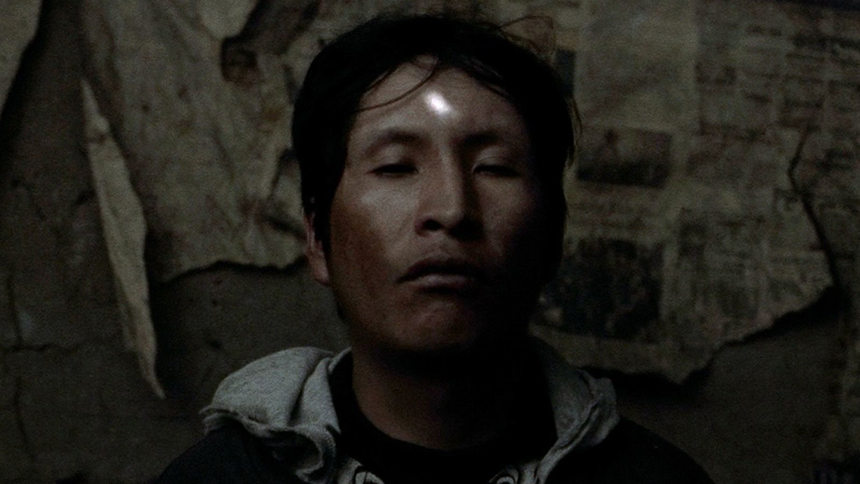 La Paz, Bolivia's capital, sitting on the high plains of the Andés, is a bustling city, and home to close to one million souls.

With electric wires and cable cars criss-crossing the ultra-modern glass skyscrapers against rugged natural vistas, the city spells out the rapid progress of the global economy in the ancient colonial capital where agriculture, mining, human labor are still dominant force. Director Kiro Russo conveys this imbalance in strong visual terms without employing too many words in the beginning of El Gran Movimiento, beautifully shot in 16mm.

The film starts with a miner's street demonstration in the city center. They lost their jobs and came to voice their opinion in the capital. Elder (Julio César Ticona) and two other miners walked seven days to get to La Paz. Elder seems to be suffering from some mysterious illness. Others chime in about his condition, that he might be suffering from altitude sickness or might have miner's lungs. Doctors say it's more psychological.

In the parallel storyline, there is Max (Max Bautista Uchasara), a hooded vagrant who lives in the wilderness on the rim of city. He occasionally comes down to the city and serves as a mystic healer and converses with the locals. Elder and Max's storylines converge, thanks to Mama Pancha (Francisa Arce de Aro), an old street vendor who knows everyone and seems to be everyone's godmother.

The narrative here is decidedly loose. Russo's almost documentary style suits the film as he comments on the modern society's illness, tying it with La Paz's stunning geography, the fact the city is sitting on the Amazon basin (the highest elevation by the largest human settlement at 12,000 feet), surrounded by towering natural peaks, affording its otherworldly atmosphere and contrast.

El Gran Movimiento culminates with Max giving Elder some sort of an elaborate, spiritual exorcism. We witness Elder’s pale body slowly gaining its color back and its modern illness leaving his body.

It might be a too inelegant and inadequate assessment to see Pancha and Max as stand-ins for the universal guardian and healer, as the film doesn't really come across as a typical, steeped in tradition, psychedelic, old versus new, didactic lesson. Russo lets his visuals to do the talking: the white dog running down the hills at night, Elder having a panic episode in the street among crowds, mangled electric/telephone wires, meat grinder image preceded by mining operation... culminating in rapid-cut images all jumbled together in the climax, serving as a mirror to the complex global society we live in.

But not everything is doom and gloom. There's a memorable, non-sequitur choreographed dance sequence at night by the locals. It comes completely out of nowhere and breaks the film’s otherwise immersive documentary feel.

Emma Goldman once famously said, “If I can't dance I don't want to be in your revolution.” And it adds to the message of the collective power of everyday people.

Russo seems to know all the tricks of narrative filmmaking and goes against it intentionally and has fun with it while doing so. El Gran Movimiento is a topical film with strong visuals as well as  a boundary-pushing cinematic exercise that is undoubtedly one of the best films of the year.

Do you feel this content is inappropriate or infringes upon your rights? Click here to report it, or see our DMCA policy.
BoliviaIsrael HurtadoJulio César TiconaKiro RussoMax Bautista UchasaraDrama