Review: LUCK and Its Many Consequences 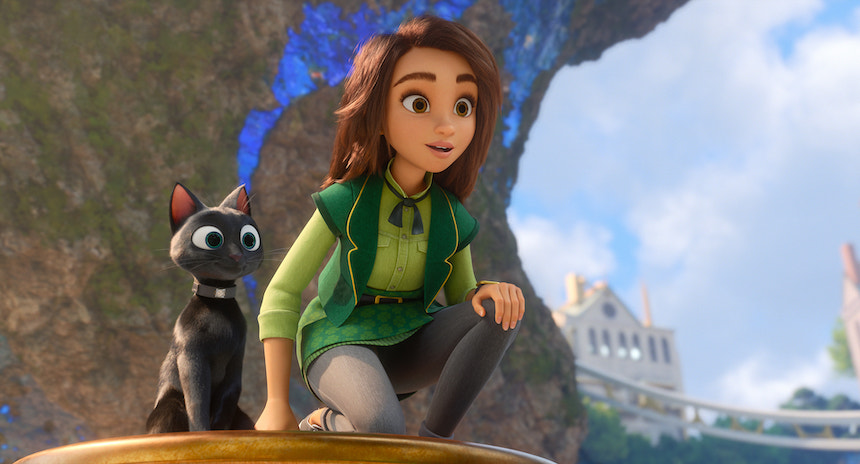 Do you feel lucky, punk?

A light, coming-of-age comedy that is pleasant and briskly told, the first full-length feature released by Skydance Animation is perfectly fine.

The 3D animation looks lovely, is incredibly detailed, and displays great flow in how it moves about the screen and through the fantasy landscapes dreamed up to support a slender tale about a young orphan named Sam (voiced by Eva Noblezada), who must overcome her belief that she is the unluckiest person in the world.

Directed by Peggy Holmes, the main thread of the movie is so slight that it takes a number of side-trips, perhaps designed to bulk it up to feature-length (105 minutes, including credits). Sam grew up in an orphanage but was never adopted, which helps to explain why she self-identifies as an unlucky person.

In this world, luck is a powerful, invisible force that rules everything. Sam, along with most everyone else, believes in luck as the supreme ruler of the universe. One day, she learns that luck is not only the overriding force in life, but also has an underground world of its own.

Her unexpected education comes from Bob (Simon Pegg), a Scottish black cat whose lucky penny pops out of his necklace and into Sam's possession one day. When Bob reveals he has the power of speech, he raises Sam's curiosity, leading her to follow him into his secret entrance into the previously unseen world.

First, though, they must get past The Captain (Whoopi Goldberg), the head of security. Then, perhaps the great and lucky Babe the Dragon (Jane Fonda) can help them.

The screenplay by Kiel Murray, based on an original story by Jonathan Aibel and Glenn Berger, goes to elaborate lengths to create an elaborate land that is explained in great wordy detail, which kinda defeats the purpose of an escapist fantasy comedy, to my mind, but that's the path the filmmakers chose to follow. Children are smarter than you think and don't really need such involved details -- it's like a fantasy with copious footnotes -- as long as the overall adventure flies.

Sometimes Luck flies and sometimes it just feels like supersized blarney, as though it were trying to convince the audience (and itself) that it's a film of substance and more than just an animated lark. Also, I feel obliged to disclose that all the film's talk about luck and its supposed "powers," to the point that it feels like it's promoting a new religious creed based on the magically delicious ideas at its heart, started to curdle my innards.)

Children, of course, won't care about any of that, and if you're okay with having a film proselytize to them about the god of luck for 105 minutes, then you're welcome to it.

Do you feel this content is inappropriate or infringes upon your rights? Click here to report it, or see our DMCA policy.
Apple TV+Eva NoblezadaJane FondaPeggy HolmesSimon PeggUSWhoopi Goldberg