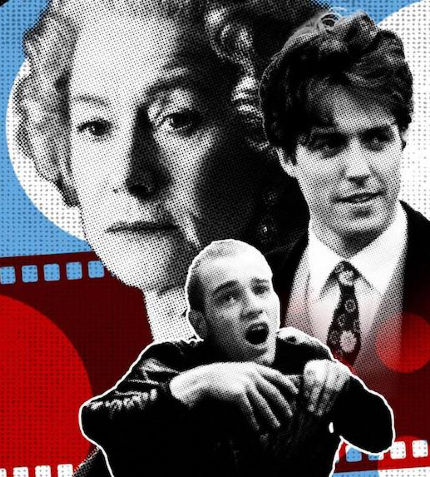 Shut up and watch, mate. You might learn a thing or two.

Highly opinionated, to a critical degree that I loved, writer/director Jon Spira's documentary series gives a grand tour of British cinema from late 50s up through 2010.

Narrated brilliantly by Nick Helm, the big question tackled is essential: What is British cinema? Is it the nationality of the filmmakers? Or their birthplace? Or the subjects they explore? What is it, exactly, that makes the film British.

Through a series of 'talking head' interviews, Spira elicits pithy, insightful, and often witty comments from a host of great filmmakers, people like Mike Leigh, Ken Loach, Stephen Frears, Terry Gilliam, Edgar Wright, Terence Davies, Hanif Kureishi, Mike Newell, Simon Beaufoy, David Leland, and more. It's not a completely exhaustive list of living legends, but it comes pretty close to including most everybody you'd want to hear from about this vital period in cinema.

Spira follows a chronological journey for the most part, but is not afraid to stop and go back in time to trace how a noted filmmaker of today got his or her start in the business many years ago. What made their particular films essentially "British"?

Going beyond the expected, more widely-known cinematic treasures, Spira unearths a number of independent films from the past that remain relevant and deserve greater attention today, including some that I'd never even heard of before, which was truly surprising to my grizzled brain. I will now spend time tracking them down.