An ominous voice-over, scenes of suburban decay, dour grey skies and desolate exterior shots. This is how Director Robin Summons' latest short Victim is introduced; a moody landscape to paint the equally stormy relationship between a mother and son.

The mum Chrissy (Kat Stewart, Offspring, Underbelly) is desperate and distressed, her house is dilapidated, her nerves frayed as her son Beau (Ned Stanford) continually ignores her in his locked room where she coaxes him out for take-out, it is her birthday after-all. Hardly a word is said as the clearly antisocial boy and the mum eventually eat in awkward forced conversation and stilted body language.

The dysfunction is evident, the physical clues and absence of father hinting at the darkness beneath the surface of soft-spoken Beau; a commitment to an incel (involuntary celibate) methodology, this particularly toxic strain of 'self-help', a misogynistic call to action that sadly rings true today, particularly in the States.

In Victim there is a mystery element to these themes, cookie-crumb conversations and estranged isolation are given a real edge when the kitchen knife drawer is securely padlocked, what has Beau done? This estranged vibe is given further credence when friends dare not go inside to drop off Chrissy's gift, or comes in pairs should they step inside.

Despite the themes of potential indoctrination, Victim is a purely personal matter, a mothers internal struggle, existing on the edge of keeping it all together, a tremendous performance to convey given the length. Beau is quietly violent, ready to erupt at any moment. The discordant sound score and Jordan Peterson-esque narration warp the notions of identity and being preyed on during isolation, quiet moments of antisocial behavior that quickly spiral into something far more dangerous.

I had the fortunate chance to flick some questions about Victim to Director Rob Summons, his gracious responses below.

Kwenton Bellette: How did the casting come about?

Robin Summons: I initially created a list of about forty or so Australian actors I thought would be right for the lead role of Chrissy. Kat Stewart was top of the list. Her humanity and vulnerability as an actor seemed perfect for this role. I then approached our casting director Daniella Friedman who loved the script and jumped on board. Daniella totally agreed Kat was the one. We weren’t sure Kat would say yes so we compiled some back up options. Lucky for us, Kat dug the script and we were able to shoot between her other projects.

We had a traditional audition process for the role of Beau and found Ned Stanford. He blew us away with the way he carried the last scene of the film.

After Daniella compiled some suggestions for Chrissy’s friends Greta and Tanya, I simply met with Harlene and Krista. I felt they both had the bubbly energy that could show a window into Chrissy’s life prior to the current complications she is having with her son.

KB: Where was Victim filmed? Seems like a forgotten dilapidated place, the dour / grey tone and isolated community reminded me of Snowtown, and I felt as equally uncomfortable.

RS: We shot the majority of the interiors in one place in a small house in Preston, in the northern suburbs of Melbourne Australia. We wanted somewhere atmospheric that could evoke that sense of dread you are referring to. We were hoping Beau’s glum, spare room could feel like it had kind of taken over the house. We shot the running exteriors out west around Atwood. nine out of ten days the opening shot would have had a backdrop of the city behind it but on the day we shot it was rainy and totally glum. We leant into it. We also shot some of the abandoned house stuff out east around Berwick. So we kind of shot all around Melbourne for the exteriors.

KB: Seemed like most people wanted to stay away from the home with the locked kitchen drawer, but the mum's friends were oblivious, why was that?

RS: We cut a scene where Chrissy's friends more overtly discussed Beau’s problems. One of them took it more seriously than the other. When friends are going through heavy things, some of us want to talk about it, to check in on them, and others of us want to just show our friend a good time and forget about it. With Chrissy kind of downplaying the situation for her own reasons, we felt this led to a good sense of dramatic tension between the three of them.

KB: The perspective was through the mother, but there were scenes of her son running through overgrown fields, was she imagining this? I assume he's done something similar before?

RS: I’ll leave the audience to decide that but I will say there is a chronology to these scenes with the son.

KB: Without highlighting the tech or internet/social media you made a minimalist statement about themes that exist because of those mediums, was there any intention to show more of that digital space/use?

RS: Personally I am a bit of a luddite and tend to think we would all be better off without the internet. I’m aware of its many benefits and how ridiculous this sounds, but I can’t help but lean that way. In terms of the film, we wanted to be with Chrissy’s perspective throughout the film, apart from the montages sequences with the voiceover. So we never wanted to sit alone with Beau and his computer to reveal what he is up to, it was more about a parent trying to connect with their child whilst getting the faintest hint of what they are up to. To be honest, the content of incel forums and the like are so abhorrent, I’m not sure I could put them on screen. It’s a really scary online world. We were more interested in the effects of that online world on the characters, than looking too specifically at the world itself.

KB: I loved the Jordan Peterson-esque voiceover, what he was actually saying had positive connotations but given the context of Victim it was more of a creeping dread of inevitability. Do you think that patriarchal figures such as this offer anything positive or helpful to society/men?

RS: I do think patriarchal figures such as Jordan Peterson offer some positive ideas to men. A lot of them are pretty ‘common sense’ which I think is why they are so appealing. But even the more positive ideas are underlined with a sense of individualism that I personally don’t respond to or think will lead to a healthier community. And then there are some quite pernicious ideas in there, dressed up amongst the appealing self-help points, particularly regarding men losing power in the world. This kind of stuff is the gateway drug to joining the angry communities of men on incel forums who ultimately hurt women. Men still have so much power - look around at our leaders, workplaces, households. The list goes on. So I think these ideas are misplaced and ultimately dangerous. If you listen to the ones in the trailer to the film, they don’t feel positive to me. However, to your point, we did want to make this voiceover intoxicating in a similar way to the way these Men’s Rights modern gurus sound on their podcasts and at their forums. Many of them are great at speaking and sound like people you want to listen to. So it was a tricky balance, but we hoped that the audience could understand how Beau has been indoctrinated into this world.

Thanks for your time Rob! 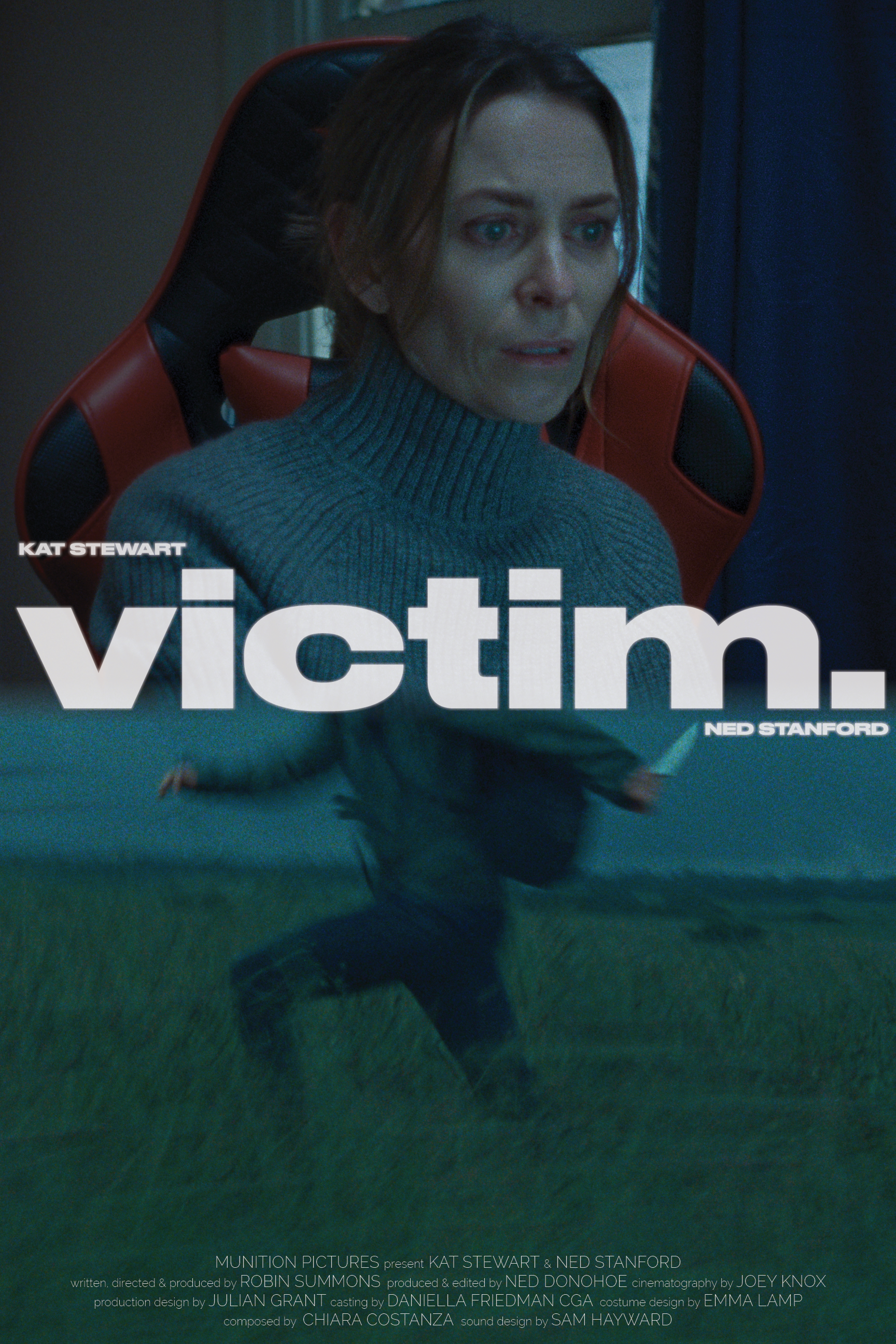 Do you feel this content is inappropriate or infringes upon your rights? Click here to report it, or see our DMCA policy.
Film FestivalKat StewartMelbourneMelbourne International Film FestivalMIFFMIFF 2022ShortsVictim