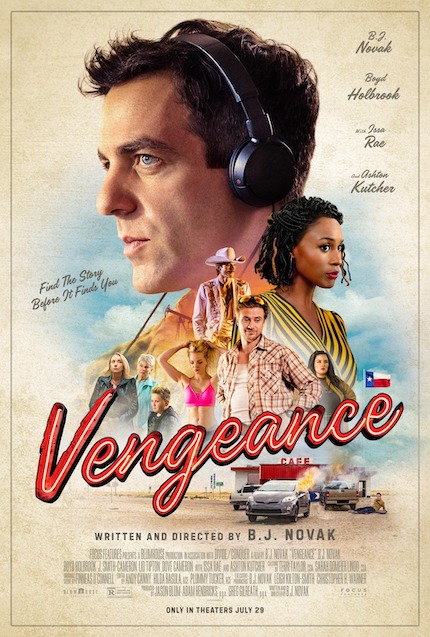 Not to be confused with the literally hundreds of films sharing the same generic title, including at least one or two others this year alone, Vengeance, the big-screen, feature-length debut of The Office veteran B.J. Novak, is far from the pulpy, exploitation-level film the title implies.

In fact, “vengeance,” both as a concept and later, as an actual possibility, comes up roughly twice across Vengeance’s meandering, unfocused 107-minute-running time.

Between those two instances, Novak’s black comedy/satire takes on Big Issues and small, everything from our social media-obsessed culture to the canyon-sized red-blue state divide that threatens to irrevocably fracture fragile American democracy. It’s nothing if not ambitious, but ambition alone isn’t enough to elevate Vengeance beyond a promising, if ultimately frustrating debut.

“Vengeance” as a concept first arrives on the scene comes when Ty Shaw (Boyd Holbrook), a West Texan of dubious judgement, convinces Novak’s smug, egotistical, self-entitled character, Ben Manalowitz, a writer for The New Yorker and hopeful podcaster, to make an obligatory appearance at the funeral of Ty’s sister and Ben’s occasional hook-up, Abilene (Lio Tipton), an aspiring musician and singer, in the wilds of West Texas.

Ty strongly believes Abilene’s death, ruled an accidental overdose, was anything but. At first hesitant about the whole vengeance thing, claiming it’s not part of his worldview, Ben changes his mind once he sees Abilene’s death not as one tragedy among hundreds of thousands or even millions, but an opportunity to launch his podcasting career with the help of his longtime friend and podcast producer extraordinaire, Eloise (Issa Rae).

Once he meets the remainder of Ty’s family, including Abilene’s two younger sisters, Paris (Isabella Amara) and Kansas City (Dove Cameron), her younger brother, Mason “El Stupido” (Elli Abrams Bickel), her grandmother, Carole (Louanne Stephens), and the family matriarch, Sharon (J. Smith-Cameron), Ben sees seemingly endless possibilities for a true-crime podcast, “Dead White Girl” (the Holy Grail, we’re told, of true-crime podcasts), tying Abilene’s death into larger social, cultural, and political issues. Eloise does too, giving him all the incentive to stick around and start asking questions about who Abilene, in fact, was, what her relationship was to her respective family members, and how and why she died of an overdose near an abandoned pump station.

Unsurprisingly, Novak leans hard, often too hard, on the stereotypical differences between shallow, self-involved New Yorkers like Ben, young, hip, and opportunist, and West Texans like the Shaw family, culturally regressive, conspiracy-friendly, and anti-liberal. Novak mines those differences for broad humor one moment, only to slightly subvert them the most.

These stereotypes, though, tends to overwhelm whatever subversive intent Novak might have had when he decided to write and direct Vengeance and make himself the central character. A discussion about the family’s fixation with the Whataburger dining experience veers frustratingly close to turning the Shaws into objects of ridicule for audiences and viewers on the other side of the screen.

While Eloise pushes for an open or ambiguous ending for the podcast (conclusive endings don’t receive as much appreciation or as many listeners, apparently), Ben gradually begins to believe that there might be more to Abilene’s death, starting with the location of Abilene’s death, a crossroads of sorts where four law enforcements overlap, and how she got there, and continuing with two long, expository dialogues with Abilene’s shockingly insightful, onetime record producer, Quinten Sellers (Ashton Kutcher, delivering a standout performance).

The closest Novak gets to a virtual mouthpiece for his views, Sellers patiently explains both the metaphorical impoverishment typical of life in West Texas, the connection between that impoverishment to conspiracy theories, and more importantly for his day-to-day professional life, the untapped musical creativity of the locals.

Even with Sellers as an enigmatic wild card, there’s little that could be described as an actual “mystery” here, but it does provide Vengeance with something of a rationale for the title or Ben’s abrupt, under-motivated actions in the last moments when, after rejecting what he sees are the values of red-state Texas, he swaps out his New York-coded clothing for standard Texas wear (jeans, belt, and cowboy hat) before embarking on an ill-conceived attempt to find closure for Abilene, Abilene’s story, and, life lessons learned, for himself.

The final moments provide Vengeance with an unconvincing and head-scratching conclusion that, at least in hindsight, describes Novak’s frustrating film in part and in whole.