Review: THE DEER KING, Antlers Up! 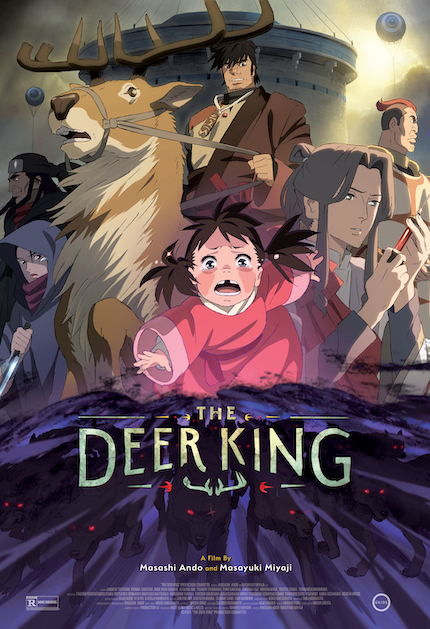 Get ready to get serious for a gorgeously animated adventure.

The Deer King
Fathom Fan Preview screenings will be held on July 13 and July 14; the film opens in select theaters nationwide July 15. Visit the official site for more information.

Animator Masashi Ando has done remarkable work on wildly popular films, such as Spirited Away, Paprika and Your Name. Now he makes his feature directing debut in collaboration with director Masayuku Miyaji, who served as assistant director on Spirited Away, and made his directing debut with the 2008 anime series Xam'd: Lost Memories.

The Deer King is based on a three-part fantasy novel series by Uehashi Nahoko, first published in 2014. (I don't believe an English-language translation has been published yet.) The source material creates a rich mythology of a world that resembles our own, yet abounds in apparitions.

The film's prologue explains the basic conflict between two warring kingdoms, which was resolved some years ago, with Zol gaining the upper hand and ruling over Aquafe and its people with a strong hand of repression.

One day, Aquafese spiritual doctor Lord Hohsalle rides into the camp where the Zolian emperor lies stricken with a terrible, probably fatal disease that has infected his nation. For some unknown reason, only the ruling Zolians have fallen victim to this plague.

Meanwhile, Van, a powerful, solitary Aquafese man who has been enslaved in a salt mine, saves Yuna, an orphaned little girl, from an attack by wild dogs. The two escape and find peace among their people outside in a secluded village. As they become father and daughter, Lord Hahsalle searches for them, since he has heard that Van is resistant to the plague; he wants to test his blood, in search of a cure for the plague, which is referred to as mittsual.

In writing these words, I sense that I've only begun to understand the film, which is captivatingly beautiful in its graceful, highly-detailed animation, even though I watched it while taking notes. It's the sort of movie that requires multiple viewings, I think, to understand and to fully appreciate, at least for those of us who are not Japanese or fully conversant with many of the references. I'm still not exactly sure, for example, about the pyuika, which appear to be cows, and the ossam dogs, which look more like wild wolves, and I still don't quite understand the importance that is placed on Van being identified as Lone Antler.

For a movie that I still don't quite understand, or comprehend fully, I was frankly laid flat by the beauty of the animation -- lush only begins to hint at its wonder -- and remain curious about the world and the society that formed around the two primary nations. Thus, I recommend seeking out and seeing The Deer King. Maybe we can figure it out together.