Review: MARCEL THE SHELL WITH SHOES ON, Disarmingly Wonderful

Jenny Slate and Isabella Rossellini star in the best film of the year, directed by Dean Fleischer-Camp. 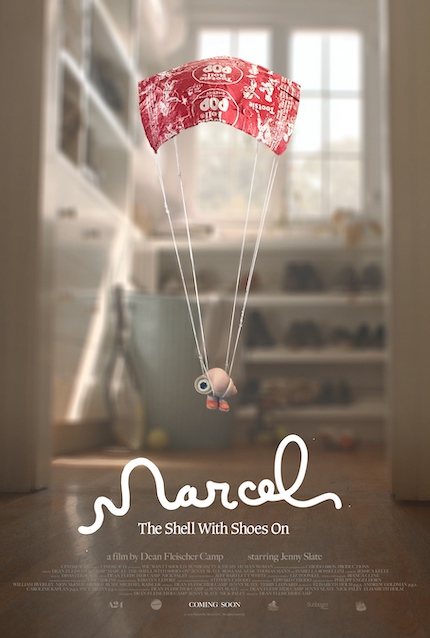 It's good to be alive.

Marcel the Shell With Shoes On
The film will open Friday, June 24 in U.S. movie theaters via A24 Films .

I am a solo traveler in the world of cinema.

Sometimes, other people accompany me on individual jaunts. Mostly, it's just me and the movies. And that is perfectly fine with me. The better movies invite me to accompany them on their individual jaunts, building a nest where we can live together in a cocoon of dreams that can be comforting, disturbing, relaxing, unsettling, hilarious, poignant, recognizable, strange, or something altogether different and unexpected.

Disarmingly wonderful, Marcel the Shell With Shoes On tells a story that I never wanted to end. Using only her voice, Jenny Slate embodies a character who is miniscule in size yet embraces all that he comes upon in a world he has only begun to explore.

Marcel lives with his grandmother (Isabella Rossellini) in a house where a man and a woman once lived. The humans moved out some time ago, for reasons unknown to Marcel. Ever since, Marcel and his grandmother live without any notice from the temporary residents who come and go from the rental abode, moving in for a day or two or a week or a month and then moving out.

Marcel and his grandmother get along very nicely on their own, thank you very much. They forage for food in the comfortable house and surrounding yard, building ingenious devices to sustain their lifestyle, and enjoy their peaceful existence. Marcel loves his grandmother, but is conscious that she is slowing down. He misses the community of his fellow shells who once lived in the house but moved away some time ago, for reasons unknown to Marcel.

Dean Fleischer-Camp moved into Marcel's house as a temporary residence, then decided to make videos about him and his life as a shell with shoes on, which he begins posting on the internet to increasing interest and growing popularity. Popularity does not equate community, though, and Marcel yearns to reunite with his lost community of fellow travelers.

What may seem initially like a one-joke movie blossoms into a garden of comical delights, told from Marcel's perspective. He often sounds like an extremely well educated baby, able to leap tall bounds of wisdom and common sense, but his humor is grounded by what he perceives and understands, which is that we all need someone. Maybe not someone to love romantically, but someone with whom we can share our life's experiences, our challenges, our successes, our failures, our joys, our thoughts, our opinions.

Or our view of movies and television shows like 60 Minutes. Dean Fleischer-Camp and Jenny Slate, who wrote the screenplay together with Nick Paley, based on a story by Fleischer-Camp, Slate, Paley and Elisabeth Holm, understand this. Fleischer Camp directed with a lovely mixture of live-action faux documentary techniques and stop-motion animation that is utterly beguiling and, somehow, completely transfixing and entertaining.

I laughed, I cried, I was glad to be alive to see Marcel the Shell With Shoes On with an audience as we shared the experience. It's good to be alive.

Marcel the Shell with Shoes On

More about Marcel The Shell With Shoes On