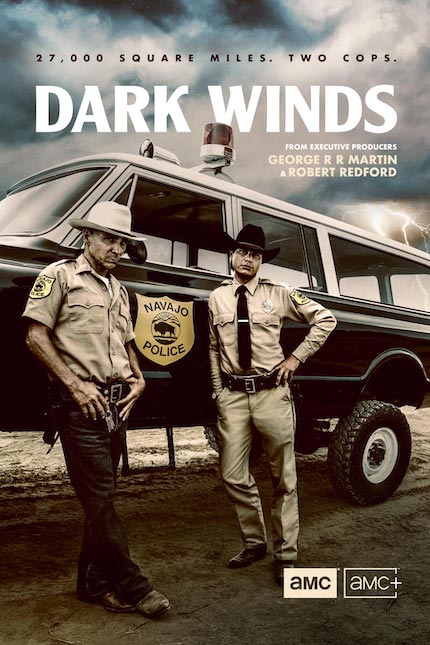 Dark Winds
The first two episodes are now streaming on AMC+. Subsequent episodes will debut every Sunday on AMC (linear) and every Monday on AMC+ (streaming).

Some years ago, I got hooked on mystery novels, including those by Tony Hillerman, whose best-known series of books featured Navajo police detectives Joe Leaphorn and Jim Chee, working separately in the first six books and then together, as they investigated crime in Native Lands.

They've been portrayed on screen in the past, to dismal effect in The Dark Wind (1991) and to much better effect in the PBS miniseries Skinwalkers: The Navajo Mysteries (2002), the latter of which was directed by Chris Eyre. Both projects were produced by Robert Redford, who now returns as executive producer, along with longtime New Mexico resident George R.R. Martin and Chris Eyre.

Eyre has a keen eye for the constant beauty of New Mexico's spacious skies and sprawling landscapes, and elicits terrific performances from the cast in the first two episodes. Graham Roland scripted the pilot; perhaps reflecting his recent experience from creating Tom Clancy's Jack Ryan for Prime Video, the series starts with a modern bang and smash scene that feels out of character with Hillerman's novels, like it's trying to grab your attention so you don't change the channel. (Or, perhaps this is because the series debuts each week on the AMC cable network before bowing on the AMC+ streaming service the next day.)

Things quickly settle down, though not too much: the pace continues to percolate, as Joe Leaphorn (Zahn McClarnon), Bernadette Manuelito (Jessica Matten) and the newly-arrived Jim Chee (Kiowa Gordon) are introduced as members of the Tribal Police, investigating the murder of an older man and a young woman, who were found dead at a motel, along with the young woman's blind grandmother, who survived, but is initially traumatized.

(Roland's script writes its own chronology, by the way, blending the characters differently from what the books did. For example, it was Tony Hillmerman's daughter, Anne Hillerman, who continued the series after her father's death in 2008, creating Bernadette Manuelito as a fellow investigator. Anne Hillerman also serves as an executive producer on the series. )

The first two episodes proceed from there, fleshing out the leading characters and offering insight as to their motivations, all in the context of the early 1970s and from the perspective of Native people who were very much treated as the Others by the white people, as represented by FBI agent Whitover (Noah Emmerich), who is far more interested in the bank robbery that kicked off the series, since its perpetrators were last seen disappearing onto Navajo property.

It's a show that becomes easily absorbing and is already gripping. The first season is scheduled for just six episodes, but I surely hope that more will be coming after that. For now, it's a must-watch.

Do you feel this content is inappropriate or infringes upon your rights? Click here to report it, or see our DMCA policy.
Anne HillermanJessica MattenKiowa GordonNative LandsNavajoNoah EmmerichTony HillermanUSZahn McClarnon