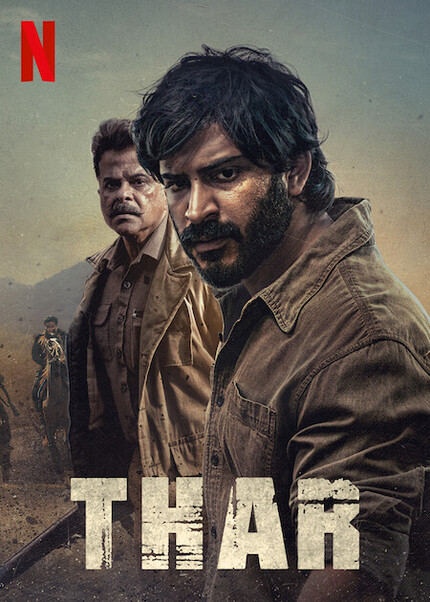 A detective investigating a seemingly random murder in the rural Rajasthani desert turns out to be so much more in Raj Singh Chaudhary’s Thar.

Nothing much happens in Munabao, a small town near the Pakistani border region of Rajasthan, but when a farmer is found hanged from a tree with all the telltale signs of a gangland hit, it piques the interest of local authorities. In strides Surekha (Anil Kapoor), a seasoned police veteran looking for a reason to keep pressing forward to that ever-elusive promotion. Surekha has seen years of petty crimes and local brawls, but nothing like this has ever crossed his desk, and he’s determined to make the best of it. Perhaps if he can solve this case, he can get the attention of his superiors and move up in the world, but it’s no sure bet.

Meanwhile, a tall, dark stranger strolls into town. Siddharth (Harshvarrdhan Kapoor) is an antiques dealer looking for a few strong hands to help him finish a job. He gets pointed toward Panna (Jitendra Joshi), a local laborer who seems fit for the job, but is out of town completing another gig. Sid tells Panna’s wife, Chetna (Fatima Sana Shaikh) that he’ll stick around until Panna returns, because the job is solid, and the money is good. The two agree that that is a good idea and begin a friendly relationship while waiting for Panna to return.

When he does, true to his word, Sid hires Panna and his friend Kanwar (Sanjay Dadhich) on the spot, and off they go. While they are away, bodies and disappearances begin to pile up in Munabao, and Surekha becomes certain that this gangland hit isn’t exactly what it seems on the surface. Local politics, cross-border drug trade with a Pakistani gangster called Hanif Khan (Rahul Singh), and too many coincidences to write off have Surekha’s spider-senses tingling, and he’s definitely right. Something isn’t quite what it seems.

Raj Singh Chaudhary’s second feature as a director is a brutal curry western; a film that trades in the same tropes that made Italy’s Spaghetti Westerns international hits in the ‘60s. The combination of white hat/black hat dichotomies and increasingly brutal violence against those who may or may not deserve such treatment hearkens back to the great works of filmmakers like Sergio Corbucci in those bygone days. The latitude may be different, but the attitude is dead on.

Chaudhary lands a major casting coup in the duo of Anil Kapoor and son Harshvarrdhan Kapoor, a pair who’ve shared the screen briefly in 2020’s AK v/s AK but haven’t had this much to work with since. Anil Kapoor (Slumdog Millionaire, 24) is a legend of ‘80s and ‘90s Bollywood action cinema who has transitioned with a surprising amount of grace to character parts and the occasional co-lead. Harshvarrdhan has had a couple of leading roles, most notably in 2018’s Bhavesh Joshi Superhero, but it was their brief collision in AK v/s AK that really showed what each could do.

In Thar, Anil’s Surekha is a determined, logical, calculating cop with a thirst for justice, and a muscle for the job that he’s never gotten much of an opportunity to flex in his extremely rural posting. Siddharth is a calculating presence; clearly a man with much more on his mind than he cares to show anyone, but seemingly harmless, nonetheless. We eventually learn that neither of these two are quite what we expect (in very different ways), and their full stories eventually come pouring out in a torrent of violence, blood, and vengeance.

With a story by Chaudhary and dialogue by Indian Indie film guru Anurag Kashyap, Thar becomes an extension of a long tradition of Indian revenge films. One thing that Kashyap brings to the table is a robust familiarity with international cinema with which not many can compete, so even when a story as solid as Chaudhary’s crosses Kashyap’s desk, he knows just how to punch it up to make it work across borders. Combine that technical writing skill with the stunning Rajasthani landscape expertly captured by cinematographer Shreya Dev Dube (of Ronny Sen’s absolutely gorgeous Cat Sticks, Slamdance ’19), evocative music from Ajay Jayanthi, and spot on editing from Aarti Bajaj (Psycho Raman and so many more), and this is an incredibly engaging feature from this team of rising stars.

If there is anything that will draw viewers into Thar’s web initially, it is the duo of Anil and Harshvarrdhan, and they do not disappoint. The elder Kapoor is a true old school movie star and scenery chewer of the highest order. Over the last couple of decades, he’s made a name for himself as a scene stealer extraordinaire, no matter whose name tops the poster, once Anil Kapoor is on screen, the film belongs to him. Harsh has worked hard to develop a different persona, a working actor, a man who’ll take a role and make it his own, and the contrast between the hyperactive self-portrait in AK v/s AK and Thar is stark and wonderful. These are two actors doing great work, and I’m excited to see it.

Thar is one of the most gruesome and violent Indian films I’ve seen in many years, and that definitely makes it stand out. With the amazing performances from everyone involved, including Fatima Sana Shaikh as a wife on the edge, this is a sun-drenched eastern desert noir that is well worth your time. Fans of Kashyap’s 2016 serial killer drama Psycho Raman will definitely want to check this one out, and any other fans of bloody revenge thrillers should be on notice as well. Thar is definitely a film not to miss.