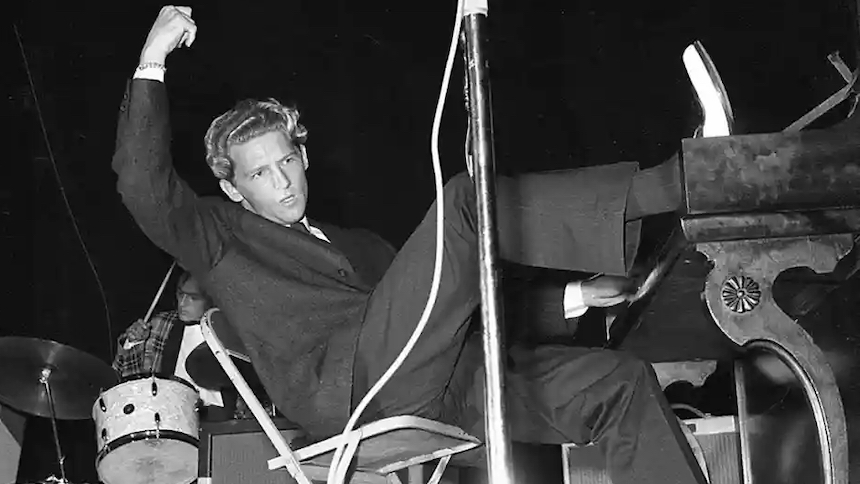 In Ethan Coen's documentary debut, we learn that Jerry Lee Lewis not only outlived all of his rock and roll contemporaries but sadly also many of his several spouses and even a few of his own children. Then after a stroke rendered him incapable of playing the piano once and for all, Lewis started from scratch and re-taught himself the piano.

A troubled mind never did kill Jerry Lee Lewis, but boy did he have just that. One would think this would largely be on account of his scandalous personal life, which has earned him a reputation as one of the most problematic figures in the antic-filled history of rock & roll, what with marrying his going-on thirteen-year-old cousin and shooting his bass player (not that he recalls the latter instance).

But no! The film paints a picture of a man with few regrets where some of his more notorious biographical hot points are concerned. Even when the direct results of his tabloid-gifting behavior turned his paycheck from 2000 to 200 dollars a gig overnight, for the most part, the man telling his own story seems without regret for his trailblazing great balls of rock and roll fire.

With Jerry Lee Lewis: Trouble In Mind, Ethan Coen adds documentary filmmaker to his resume of short story genius and junior film critic to convey the fascinatingly addled mind of the explosive self-taught song and dance man of the rock and roll piano. To do so, Coen quilts together a televised life told in captivatingly honest interviews and footage of fiery performances throughout the years of 'the killer's' rough and tumble yet deeply enduring career.

In some of the film's best bits of footage, Jerry Lee duets with Little Richard on the traditional folk song, "I'll Fly Away", reminding us again of the fuel that roots music offers some of the Coens' most inspired works for my bucks. But at the forefront of Ethan's first solo cinematic venture, more potent than the soundtrack is a protagonist worthy of the great character writer's undivided attention; one who isn't afraid to hash out his colorful demons to anyone who happens to be asking.

For all the 1950s puritans who at the time of rock and roll's inception condemned the new medium to which Jerry doused fuel to the fire as 'the devil's music', one would think that its founders were above such moralistic concerns. But again and again, Jerry Lee Lewis: Trouble In Mind shows us a public look into a genuinely perturbed man whose hard saloon living and general participation in his own craft seemed to weigh heavy on his shoulders.

A refreshing shift away from a lot of generic music documentary content nowadays, the film is the kind of naked portrait of a complex American 20th-century gem that would make a satisfying double feature with Terry Zwigoff's Louie Bluie. When the time comes for A24 to release Ethan Coen's modest slice of documentary treasure, or perhaps when they gift it to the Criterion Collection, here's hoping they get Robert Crumb to provide the artwork.

Do you feel this content is inappropriate or infringes upon your rights? Click here to report it, or see our DMCA policy.
Cannes 2022documentaryEthan CoenJerry Lee LewisTrouble In MindUS