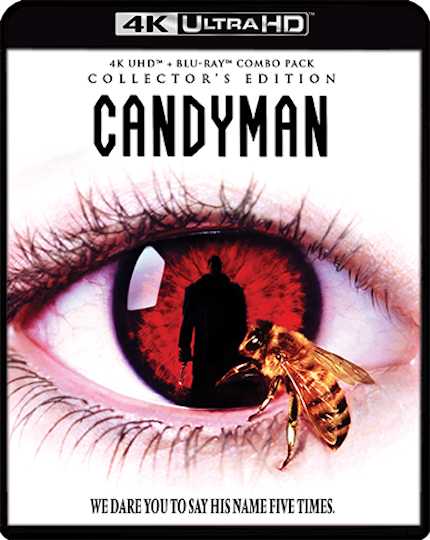 Well, hello again, Candyman — we meet again, though I still haven’t said your name out loud in a mirror five times — and I’m never going to, sorry.

Today, Candyman is being unleashed in not just the 2K Blu-ray edition like last time, but as a 4K and Blu-ray bundle, which is a nice package to have if you want both, or want to split the cost with a friend.

I've said most of what I've had to say in my original December 2018 review of the Blu-ray, but I put in the 4K unrated Director's Cut to see how the film looks this time around, with a new master.

Nothing took my breath away, image quality-wise, as there are some instances of flickering and high grain, particularly during the opening credits and the beginning of the film. There are some crushed blacks later on in the film as well, no doubt due to how the film was lit in the first place, much like the OG The Godfather.

However, that's not to be said that the film doesn't look absolutely amazing in other places, because it does. I just wish it were more uniform. That said, film restoration isn't my calling, and I can't speak to the hurdles that one may face when restoring a film.

Sound is uniformly excellent, and the film is no less enthralling than when it was released in 1992, nor on its subsequent many home video incarnations.

Let's check out the discs and their assorted featurettes:

The bonus features, as you can see, were mostly ported over from the previous Scream Factory Blu-ray release, which also had much better cover art. (My guess is that the company could no longer license that art for some reason, or other.)

Besides the incredible new Dolby Atmos sound and 4K master, the new feature here is the interview with actress Vanessa Williams, who's delightful. I went back and rewatched the other featurettes, and I still love hearing about the original Clive Barker story, the special effects gurus on their work for Candyman, and a thousand times YES to Tananarive Due and Steven Barnes unwrapping the film from their perspective and from a larger sociological lens.

If you'd like to add Candyman 4K & Blu-ray combo release to your home video library, head over to Scream Factory's page for the film here.