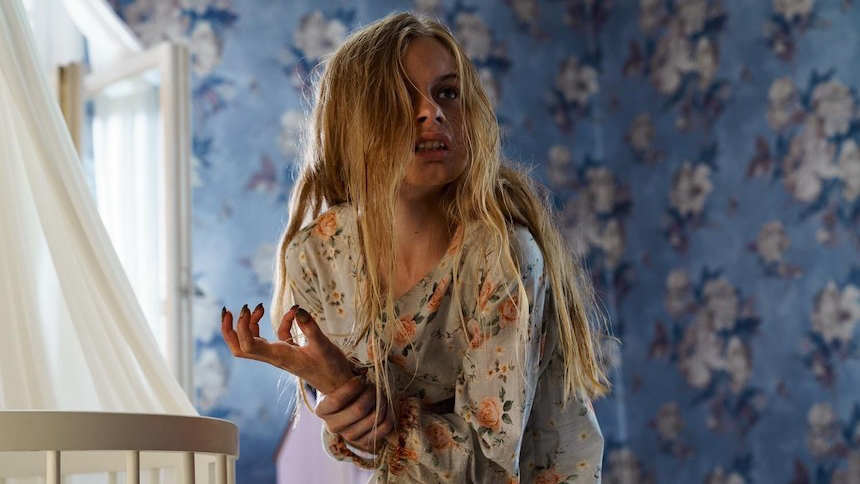 First time feature director Hanna Bergholm goes for broke in Hatching, a standout film in this year’s Sundance Midnight lineup. Planned pastel perfection, a big ass egg, and a gruesomely adorable monster bird-thing are just a few of the reasons to keep this film on your watch list, as there is unlikely to be anything else like it this year.

Young Tinja (Siiri Solalinna) lives a perfect life. An immaculately maintained home, a doting father, a loving brother, and most of all, a perfect, beautiful mother. Or so Mother (Sophia Heikkilä) would have the world think. A budding lifestyle influencer, never without her phone and selfie stick to record yet another perfect moment in the life of a perfect Finnish family. Tinja’s mother projects nothing but success to the outside world, but for this pre-adolescent girl, it’s an unbearable weight that may soon collapse the façade of flawlessness Mother works so hard to maintain.

As the family sits placidly at their couch, a perfect tableau of the idyllic existence Mother presents, a crow comes crashing through the window, throwing their house, and by extension their lives into complete chaos for what seems like ages, but it actually less than two minutes. When Tinja finds the badly injured bird on the ground amongst the shattered vases and scattered remnants of the perfect home, she begs to try and heal it, but Mother refuses and quickly dispatches the intruder, sending Tinja to drop it in the compost pile outside.

Not long after, when the bird’s corpse has mysteriously disappeared from the compost, Tinja finds an abandoned egg. Knowing that her mother would never allow her to do anything to help, she secrets it into her bedroom, where she cares for it without knowing exactly what it is. She soon finds out that it’s not your average ovum, as it grows and grows to nearly her own size before eventually Hatching.

What emerges isn’t exactly a bird, though it isn’t exactly not a bird either. It’s a gruesome looking half-bird, half-humanoid monster, cute in a super gross kind of way, with a face only a mother could love. Thankfully for the bird, Tinja – who names her Alli – is a far more caring mother to it than her own is to her. The two develop a very close, sometimes disgusting – regurgitation, anyone? – bond that soon translates into a kind of warped family duo to supplant the one in which TInja finds herself stuck.

Alli (played at different stages by a wonderful puppet, then Jonna Aaltonen and Herta Karen) is something more than just a monster, though. It begins to take the actions that Tinja can’t, where Tinja is throttled by expectations and her mother’s demands for perfection, the bird knows what pains the girl, and is having none of it.

Tinja is a gymnast, though one gets the impression that she’s in it as much to gain her mother’s approval as of her own volition. What a perfect avocation for a young girl. Gymnastics is the perfect combination of power and grace; it is, by definition, an athletic competition scored on beauty, power, and precision.

It’s also common knowledge that the intense training that competitive gymnasts go through can stunt their physical development, frequently delaying puberty, and Tinja seems like she might be heading down that road as her mother’s demands don’t leave much room for growth; physical or emotional.

In a way Hatching is a coming-of-age story for both young adoptive mother and her inhuman child, but it’s more about the way Alli is able to bring out Tinja’s truth than Tinja finding it on her own. The two navigate adolescence together, the wild emotional swings, the first glimpses at parents who are humans with faults of their own, petty jealousies between girls, and other stereotypical challenges young girls face, but from a very unusual lens. The conflicting hormonal emotions given physical body through the docile Tinja and her more feral, in some ways more authentic, child/surrogate Alli.

From the outset, it’s clear that every inch of Hatching is meticulously intentional. Beyond the stellar team of director Bergholm, and her screenwriter Ilja Rautsi (also making his feature debut), there’s an entire team who are clearly perfectly in sync when crafting this wonderfully bizarre gem. Within ten minutes, it’s clear who the main characters are, what their settings say about them, and how they interact with the world.

This is thanks in no small part to the impeccable production design from Päivi Kettunen and art direction of Juris Zhukovskis, who created and executed the palette of soft pastels onto which this story is painted, which pairs perfectly with Ulrika Sjölin’s costume design, perfectly illustrating the whole vibe of this picture-perfect family. However, perhaps the star of this visually unique film is Alli herself. When the monster first hatches, she’s a combination of a beautifully grotesque practical puppet, augmented with CG to add a few touches.

Combine all of that with pitch perfect performances from the lead actors, and you’ve got a stunningly unique horror that draws as much from John Waters as it does from John Carpenter’s The Thing. Hatching comes to us from a world that is a little bit off kilter, not quite in sync with reality, and while the film has been in development for several years – it is an alumnus of Fantasia’s Frontières market back in 2018 – it still somehow manages to put reality at a kind of distance, kind of like the world at large over the last two years.

It’s escapist fantasy, it’s a little bit revenge horror, it’s weird as fuck, and it’s going to have a lot of people talking.

Review originally published during the Sundance Film Festival in January 2022. The film opens Friday, April 29 in select U.S. theaters via IFC Films, and will be available May 17 via Digital/Video On Demand platforms. Visit the official site for more information.