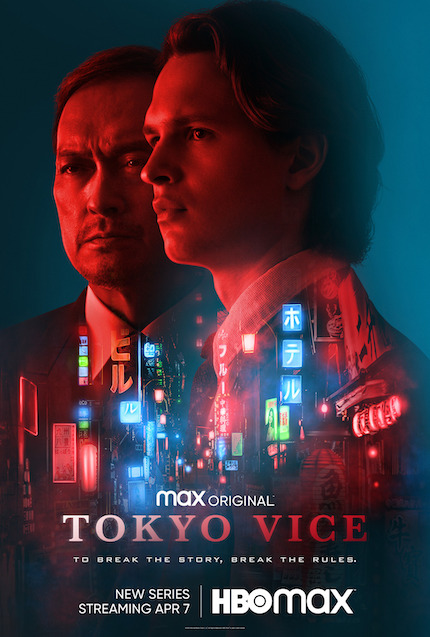 Really, what would Japanese people do without Americans around to explain everything to them?

Created by J.T. Rogers, drawn from Jake Adelstein's 2009 memoir, Tokyo Vice: An American Reporter on the Police Beat in Japan, the series kicks things off by fairly overflowing with stereotypical 'fish out of water' notions about Japan, told from the perspective of the lanky, baby faced Ansel Elgort, here looking even more baby faced than he did in Edgar Wright's Baby Driver (2017).

Hailing from Missouri in the midwestern U.S., Jake Adelstein (Elgort), the son of a coroner, aces a test and thus lands a job at the biggest newspaper in Japan, the first foreigner to do so in the paper's history. Assigned to the police beat, as are all cub reporters, Jake kicks against the goads, naively determined to prove himself every bit the superior investigative journalist, even as his editors bat down his pitches and berate his stories. (Trust me, as an editor myself, I have a lot of empathy with them.)

Even laced with director Michael Mann's signature stylistic flourishes, the first episode still nearly drowns with Jake's overinflated sense of his own abilities and purity of intention, especially as portrayed by Ansel Elgort, who acts mostly with his hair.

As the story progresses under the direction of Josef Kubota Wladyka in episodes 2 and 3, the settings and the story turn in the direction of a police procedural, and the stylistic overload calms down. The narrative also expands to feature more of Samantha (Rachel Keller), who works at a hostess bar visited by Jake; her professional ambitions extend far beyond the cub reporter's initial impressions.

We also get to see more of Inspector Katagiri (Ken Watanabe), a highly-respected veteran detective. Dealing with the yakuza requires a certain finesse to ensure personal safety and the survival of your family, which Inspector Katagiri understands.

The first episode exasperated me when I watched it this morning. I'm exhausted by too many creatives in the U.S. who apparently believe that the only way to experience or learn about another country is to present everything through the eyes of a person raised in the U.S., as though that particular perspective is required in order to validate the experience or event. Why not just tell the story, focusing on the most pertinent aspects?

Once the story in Tokyo Vice comes into greater focus in episode 3, things start to improve; indeed, two notable sequences, one violent and one quiet, caught my full attention. At this point, though, I'm afraid it's an uphill battle.

Do you feel this content is inappropriate or infringes upon your rights? Click here to report it, or see our DMCA policy.
Ansel ElgortHBO MaxJapanKen WatanabeMichael MannRachel KellerUS