Josh Brolin, Lili Taylor and Imogen Poots star in a sci-fi tinged modern Western series that gets better as it goes, debuting on Prime Video. 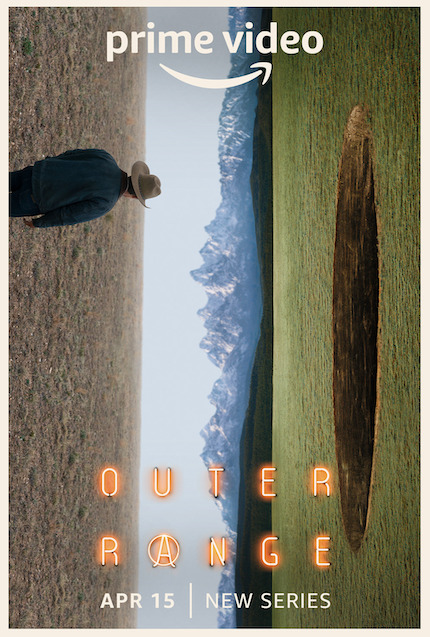 Mashing genres together can be fun!

Recently, I've been watching a lot of Yellowstone, the sterling series that stars Kevin Costner as the owner of a huge family ranch in Montana that is constantly under siege. Co-creator Taylor Sheridan (Hell and High Water) has written -- or, occasionally, co-written -- every episode, and so my mind has been overflowing with his rich, elegantly-composed dialogue, the crisply-paced action/violence, and the gorgeous exterior landscapes.

Outer Range is not that kind of show, even though it's set in adjoining territory (Wyoming) and features Will Patton in a supporting role. My mistake. (It's also not like director Kevin Costner's Western Open Range.)

Instead, Josh Brolin and Lili Taylor star as Royal and Cecilia Abbott, the owners and operators of a family ranch that is sizable but not overwhelming in size. They are earnest, hardworking people who work the ranch with their two adult sons, Perry (Tom Pelphrey) and Rhett (Lewis Pullman) and their young daughter, Amy (Olive Abercrombie).

They are under constant economic pressures, which are exacerbated by a neighboring family ranch, owned by the ornery Wayne Tillerson (Will Patton), that has laid claim to some of their property in a land dispute. The Abbott boys spar with the Tillerson boys, Billy (Noah Reid) and Luke (Shaun Sippos).

As the rivalry heats up, Deputy Sheriff Joy (Tamara Podemski), who is distracted by local politics as she runs for sheriff, is stuck in the middle. Also very much in the picture is a traveling camper named Autumn (Imogen Poots). What is her possible connection to everything?

The first two episodes set up the rivalry between the families and violent actions that result. But that's not all! We also begin to get a sense of why Autumn is there and are introduced to the show's primary mystery, which the following episodes explore in teasing parallel with a secondary mystery that becomes more pertinent as the show goes onward.

The series becomes more compelling as it goes, so the decision to premiere two episodes weekly is a very good one. Each episode runs about 45 minutes, so it should be easier to binge just two episodes at a time rather than all eight episodes. Plus, it takes several episodes of uneven pacing and uncertain tonal shifts before all the cylinders start firing, which (not) coincidentally is readily apparent in Episodes 5 and 6, directed by Amy Seimetz (Sun Don't Shine).

The mixture of genres (Western, science fiction, mystery, family drama) never quite gells entirely. Even so, more than enough tasty ingredients begin percolating early. Josh Brolin takes firm hold of his character and shakes him back and forth, suggesting deep tensions within.

Lili Taylor proves to be the rock of her family. Will Patton, unhinged, is a glory and a joy to behold. Imogen Poots steadily becomes more intense, and even a bit frightening.

The more Outer Range leans into its lunacy, the better it gets.

Do you feel this content is inappropriate or infringes upon your rights? Click here to report it, or see our DMCA policy.
Imogen PootsJosh BrolinLili TaylorPrime VideoUSWill Patton