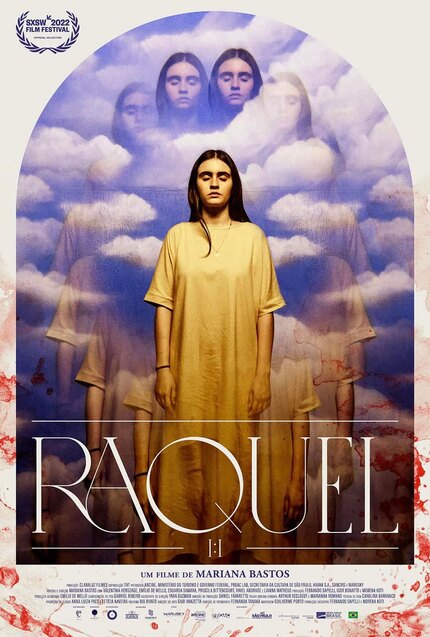 Religious fanaticism, parental trauma, and misogyny from within and without are all up for dissection in director Mariana Bastos’s fascinating genre-tinged drama, Raquel 1:1. The only Brazilian feature in the SXSW lineup, Raquel 1:1 is a fascinating look at one young girl’s struggle to find her way in a rural town overwhelmed by religious orthodoxy. Simple inquiries turn her into a pariah and change the entire dynamic of the town around her, but is it for the better?

For the first time in a while, Raquel (Valentina Herszage) is living with her father Hermes (Emílio de Mello) following the tragic, violent loss of her mother. Struggling to find a way to put it behind them, Hermes moves them back to his hometown, a rural religious backwater dominated by the local pastor, Elisa (Lianna Matheus) whose very literal reading of the Bible has this town thinking twice before they even imagine sinning.

Raquel is a religious girl, herself, and thinks that introducing herself to the local church might be a good way to make friends. But when she starts to get close to Ana Helena (Priscila Bittencourt), Elisa’s daughter, she realizes that this is no regular church, this church is old school, and she gets very uncomfortable.

One day while she and her friends are in the woods on an afternoon out, she follows a faint call that only she seems to hear. Deep in the forest she finds a cave, she steps in, and then we lose her. Not quite sure what she saw in there, we do know that she’s different when she emerges; liberated, powerful, confrontational, and ready to make her church friends very angry.

Finding a few kindred spirits who are tired of the misogyny inherent in the bible and the culture of the town, Raquel and her new acolytes decide to work on a little update. This goes poorly and soon Elisa and Ana Helena are determined not only to stop her, but to make an example of her and her father for allowing his daughter to attempt this sacrilege.

For an outsider, meaning someone not trying to survive in the furthest reaches of rural Brazil, this all seems a bit extreme, but Raquel 1:1 is still an interesting and eye-opening look at the way religion and tradition is made to maintain power all over the world. Bastos uses a very blunt tool to explore these ideas, there isn’t much subtle about the film, but it works, and as the film wears on the techniques and storytelling before more fantastical until culminating in a delirious climax that calls to mind similar tales of put-upon women seeking freedom from those who would subdue them.

Herszage’s performance as Raquel is strong and consistent, even as the character suffers the slings and arrows of her peers, she stands firm in her beliefs. She does all this while constantly battling her own ghosts of the traumatic loss of her mother. Raquel 1:1 is really a film about ideas, and Herszage is an effective vessel for Bastos’s commentary.

While I don’t think Raquel 1:1 is inflammatory or raw enough to really breakthrough in a major way, it is nevertheless an incredibly well told story that film fans will appreciate. Mystical elements are introduced early on, but never exploited fully, and even when they do blossom in the film’s conclusion it feels like a partly wasted opportunity. It’s not a major complaint, but it feels a bit too subtle for the effect it’s expected to have on the audience. Raquel 1:1 may be missing that little bit of oomph that would make it more of a buzz title at this year’s SXSW, but it is a damn good film that sheds light on feminist issues plaguing Brazil and the surrounding region in a novel way.

Do you feel this content is inappropriate or infringes upon your rights? Click here to report it, or see our DMCA policy.
Mariana BastosValentina HerszageRavel AndradeEmílio de MelloThriller