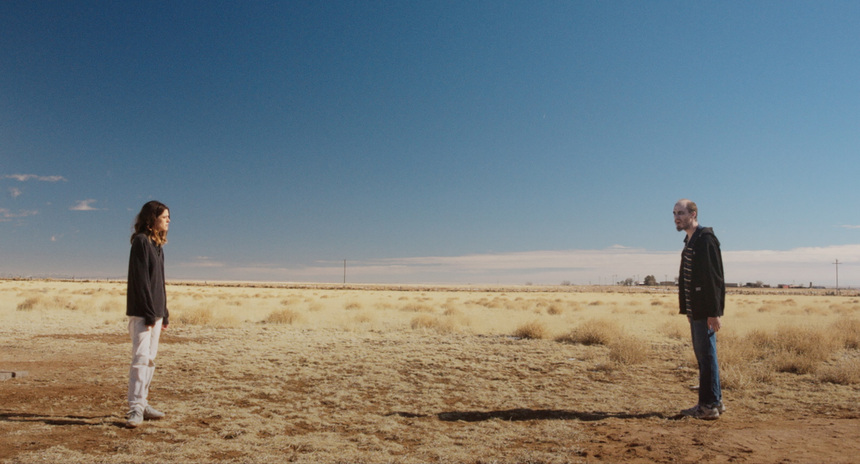 A chance meeting of old friends, a very persistant stalker, and a bit of witchcraft all play a part in writer/director Pete Ohs's curiously quirky Jethica.

Elena (Callie Hernandez) and Jenny (Ashley Denise Robinson) are old friends who haven’t seen each other for a while. When they happen upon each other at a remote gas station in rural New Mexico, they decide it’s too coincidental to just walk away and they drive to Elena’s isolated home for a cup of coffee and a catch up. It comes out that Jenny has been dealing with a stalker named Kevin (Will Madden), and that the trauma from the experience runs deep, but she’s on a healing road trip to try and reset herself and get back to normal, at least that’s the story we’re given.

Then, out of nowhere, Kevin shows up. At first Jenny doesn’t believe it, but pretty soon an unusual set of very particular circumstances prove to her that it is her stalker, and the pair have to figure out how to deal with it. Elena’s family has a history with witchcraft, and she decides that the only way to get rid of Kevin is with a little bit of help from beyond the grave. A spell is set in motion, but it proves to be trickier than anyone expected, and they have to try another tact, then things get really weird.

Ohs’s microbudget feature is an extremely specific kind of supernatural fiction. It’s more rooted in exploring the trauma and shared relationships between these characters than any kind of mystical shenanigans. Even though the stalker originates with Jenny, this is really Elena’s story of learning to not only harness her family’s legacy, but then to try and deal with her own recent trauma and perhaps put into practice some measures she’d never imagined she’d need to.

Jenny, for her part, is deeply affected by her history with Kevin, whose pronounced lisp lends the film its title as he paces back and forth calling to her at all hours of the day and night. As she begins to explain her story to Elena, we are given an insight into the incessant barrage of harassment she’s endured at Kevin’s hands. Videos and dozens of letters illustrate that this isn’t just a fling that didn’t work out, this is a deeply emotionally unstable man, a potentially physically dangerous man, and someone who simply would not let Jenny live her life. So, she retreats, she hardens, she deadens herself inside until she has no choice but to finally react in a way that unfortunately ends up tethering the two together that they now must find a way to undo.

Ohs makes the unusual and clever decision to have the audience spend a lot of time with Kevin, typically these stalker stories are centered almost entirely on the victims – naturally. In this case our view of Kevin provides us with not only a clear vision of just how unstable he is, but also a bit of empathy towards this character, even at his worst. It’s a risky move, and one that is sure to rub some viewers the wrong way, but it does pay off in the end.

The vast majority of the film takes place at Elena’s home, surrounded by miles of New Mexico desert, creating a very powerful isolation that emphasizes her and Jenny’s inability to hide from this threat. While the film is very modest in its means and plenty of seams still show, this setting provides for good production value and works well visually where bigger projects might’ve been forced to use more elaborate VFX to convey similar tones.

At a scant 70 minutes, Jethica barely crosses the threshold into feature territory, and even that runtime is a stretch. There is a completely unnecessary wraparound that is clearly just here to get them over that hump, it’s one of my least favorite things about the film. However, the story and the performances are solid, and that’s what this film is about, exploring these characters, living and dead, friend and foe, and trying to find an empathy even when forgiveness is not an option. Viewers’ mileage will definitely vary here, but Jethica delivers a fresh and empathetic look at the lingering trauma that victims of stalking endure, even when the actual experience is supposedly over.

Do you feel this content is inappropriate or infringes upon your rights? Click here to report it, or see our DMCA policy.
Pete OhsAndy FaulknerCallie HernandezWill MaddenAshley Denise RobinsonComedyDramaThriller