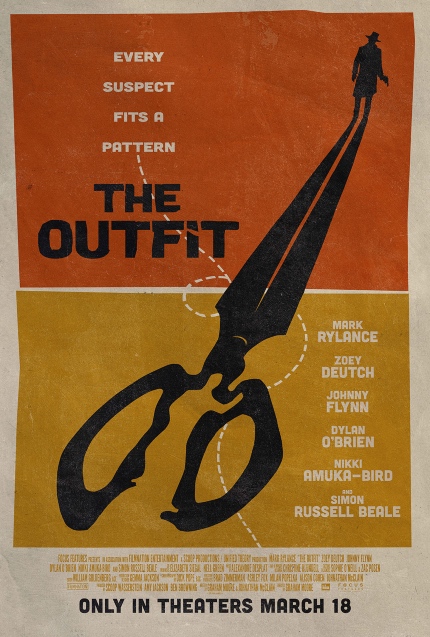 Beginning with a well-regarded, commercially successful, historical detective novel, The Sherlockian, more than a decade ago, Moore followed that just a few years later with a Best Adapted Screenplay win for The Imitation Game, the Benedict Cumberbatch-starring biopic about the short, brilliant, tragic life of mid-20th-century British mathematician Alan Turing, at the 2015 Academy Awards.

From there, it’s been a hop, skip, and a long jump to Moore’s feature-film directing debut, The Outfit, a delightfully arch, serpentine crime drama starring another Oscar winner and minimalist master, Mark Rylance (Don't Look Up, Bridge of Spies), as a Saville Row-trained “cutter” (a “tailor” by any other definition except Leonard's) who becomes inadvertently embroiled in a predictably violent, bloody gang war.

Leonard deliberately remains on the margins, content to work morning, noon, and night at his shop, with only his assistant and surrogate daughter, Mable (Zoey Deutch), as company. In intermittent voiceover, Leonard introduces the audience to the ins and outs of making a suit, from the various materials needed to create pants and a jacket, the measurements, both physical and psychological, needed to make a well-fitted suit, to the time, labor, and care needed to turn the Platonic ideal (i.e., the perfect, unattainable suit) into reality.

While Mable understandably dreams of leaving a snowbound Chicago for warmer climes and a life of romanticized travel abroad, Leonard has, if not seen too much of the world, seen enough to content himself with a relatively routine, risk-adverse life. Providing his services to the local mob headed by the elderly Roy Boyle (Simon Russell Beale, The Death of Stalin), however, comes at a price.

In exchange for ensuring the safety of his shop, Leonard allows the Boyle gang to use his shop as a drop-off location for envelopes and packages. Those periodic drop-offs put Leonard into direct contact with Richie (Dylan O’Brien), the elder Doyle’s temperamentally, terminally insecure (fail) son, and Richie’s ever-present companion and the elder Doyle’s favorite triggerman, Francis (Johnny Flynn).

The Outfit unfolds (or unravels, if you prefer) over the course of 48 hours in Leonard’s one-floor, three-room tailor shop. Through startlingly economical, efficient storytelling Moore and his co-writer, Johnathan McClain, introduce the setting, the players, and the differing agendas, interests, and fears that will put them into eventual conflict with one another. Once Richie shows up unexpectedly, injured but alive, with Francis in tow, Leonard’s immediate and long-term future turns immediately precarious, forcing Leonard to use every available skill, talent, and resource to survive the night and hopefully evade and avoid becoming collateral damage to the gang war threatening to erupt beyond the confines of the shop.

Not surprisingly, the tailor shop setting naturally lends itself to a stagebound, theatrical feeling, but despite the obvious limitations, The Outfit rarely feels small, cramped, or claustrophobic, relying instead on taut, slow-burn storytelling, textured, slightly heightened production design, straightforward, unobtrusive camerawork thanks to cinematographer Bill Pope (The Matrix) and editing, and, of course, a talented, skilled cast bringing their level best to the proceedings.

In practically every respect except perhaps one (one too many late-film turns or twists), The Outfit’s interwoven elements succeed in delivering consistently engaging, enthralling entertainment, unsurprisingly led by the always watchable Mark Rylance, as precise and rigorous an actor working in cinema today, and a supporting cast who, to borrow a relatively new phrase that's already approaching its sell-by date, perfectly understood the assignment, each as broad or grounded as the material dictates or demands, each contributing their part(s) to a memorably deft, clever whole.

The Outfit opens in movie theaters across North America on Friday, March 18, via Focus Features. Visit the official site for more information. 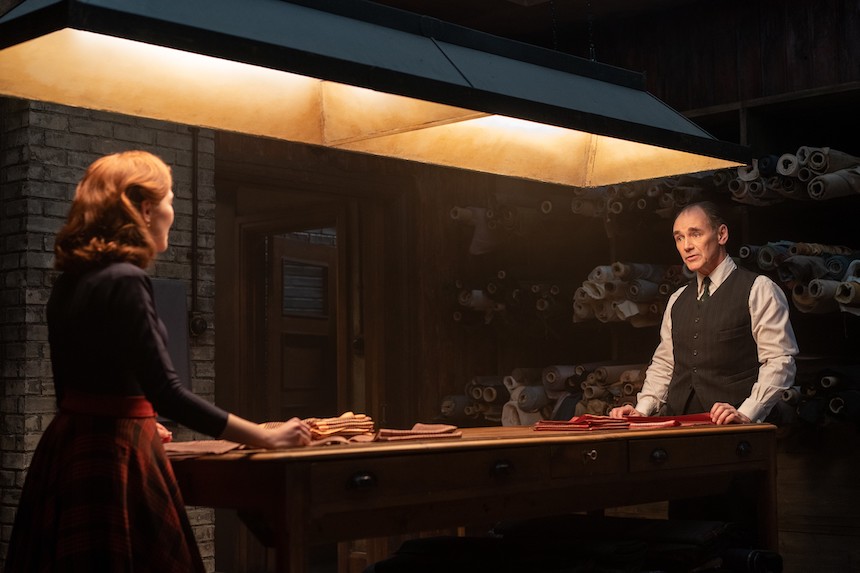