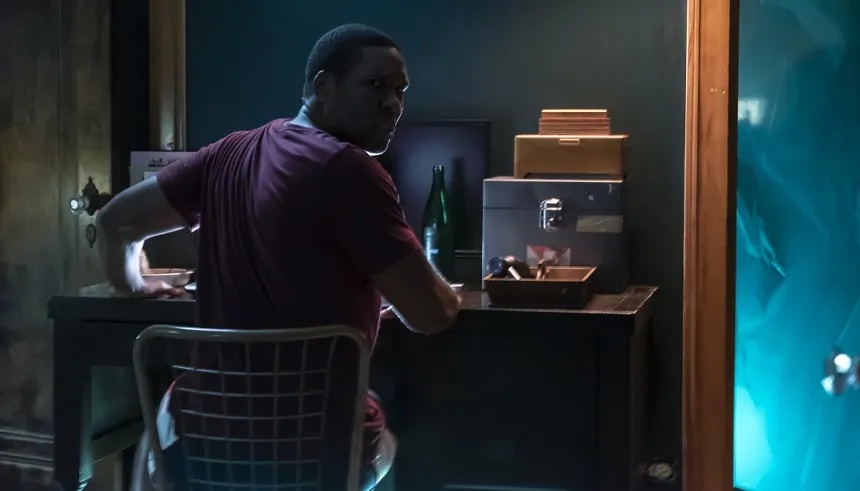 Ken Barber is just managing to keep himself together. Two years after alcoholism ruined his marriage, he's moved to another city and shut himself in a lonely apartment. He's trying to earn a living by making life-tip videos for youtube, while tending to his orchids and doing some amateur taxidermy. But something is wrong; strange noises are waking him up, objects moving on their own, and when he finds out his place was the site of a violent murder, he jumps to some (perhaps logical) conclusions.

Jennifer Reader (Knives & Skin) is no stranger to people on the edge in odd places, and she takes the audience to places that have become un-intimate through the uncanny and the terrifying in Night's End. One man's attempt to stave off his lonely existence through online videos and chats turns into a waking nightmare that proves all too real.

While there are signs of Ken's attempts to stabilize his mental health - working on his flowers and animal stuffing, chats with his best friend, and ex-wife and her new husband - all of whom try to be supportive) - it's clear that he seems to be in a liminal space, both physically and emotionally. We assume we gets deliveried of food, but we only see him consume tomato soup, coffee, and pepto bismol. We assume he gets deliveries, but the only regular thing to come through his mailslot are dead birds.

What is this place, then, where Ken has ended up? And why is this ghost stalking him? There is conflicting information about what happened, but someone was killed, that something from beyond the grave has violence on their minds. Reeder films this story not only with some pretty terrifying jump scares and slow creeping horror, but also gives a sense of Ken both having room to move in his loneliness, and trapped in a proverbial prison.

Between his old life and the new one he's trying to build, he is in his most vulnerable state, and while video chats are fine, they are no substitute for the human companionship that could fill the void that this ghost is trying to occupy. Perhaps that is what ghosts do - fill that void (though in this case, not in a good way), with dread and anxiety that seeps into the other parts of your mind. As Ken, Geno Walker finds a way to communicate how on the edge Ken is - at times, capable of logical thinking and processing, trying to find a solution to his problem; but he's slipping and fast, as all there empty spaces are crowded by his anxiety and the vengeful ghost.

Given that Ken's communication (at least with living people) is entirely online, that opens up another liminal space of the story: the virtual. Both Reeder and screenwriter Brett Neveu have a godo grasp of the Youtube community that produces video content on the supernatural, conspiracy theories, and the like - the attachment one can have to the person across this liminal space, how it can both seem real, and yet constantly be question for authenticity. It's amazing how frightening it can get to watch the screen within the screen as it slowly takes over.

Night's End is the kind of intimate horror that, arguably, could only be made since we have had a better understanding of what it means to be physically isolated and technically connected at the same time. Reeder does great work expanding her particular nuance with the darkest recesses of human minds on the edge, their weaknesses and desperation. It's a chilling work that might make you want to turn off your modem for a while.

Do you feel this content is inappropriate or infringes upon your rights? Click here to report it, or see our DMCA policy.
Jennifer ReederBrett NeveuMichael ShannonKate ArringtonDaniel KyriHorror